Until early 2007, Kia had shown glimpses of ambition but ultimately, glimpses were all they were. Cars like the Sedona, Picanto and Sorento had led commentators to speculate on what the marque might be capable of but it wasn't until the arrival of the cee'd family hatchback that any cast-iron evidence was forthcoming. The cee'd was the first car to really showcase Kia's potential to rise above the bargain basement territory where the Southeast Asian marques had traditionally held sway with their low prices and high equipment levels. Finally, here was a Kia with the quality to challenge the European and Japanese brands on a level playing field. On the used market, the cee'd might even make more sense than it did new.

The cee'd arrived with a well fleshed-out model range signalling Kia's intent. Two petrol and two diesel engines were available, along with a comprehensive collection of trim levels. The line-up looked like that of a mainstream family hatchback rather than a value-orientated Korean offering and on acquaintance with the cee'd, it was clear that the car's leanings were very much in that direction too. The driving experience and particularly the interior quality were better than anything Kia had yet come up with. The cee'd range was further enhanced by the arrival of the SW estate version in the autumn of 2007 and Kia's idiosyncratic model naming policy surpassed even itself in early 2008 when the pro_cee'd three-door hatch was launched to bring a sporty element to proceedings.

The cee'd is a car designed by Europeans for Europeans. It's built in Europe - in Slovenia to be exact - and the man behind the design project, Peter Schreyer, was once head of design for Volkswagen Group. The Koreans pulled no punches with this design and that much is evident the very first time you clap eyes on a cee'd. We challenge you to name one Korean car before this one that hasn't had at least one gratuitously odd styling feature. Think of even the better-looking South-East Asian cars and there will be some jarring detail you'll be able to nominate fairly easily. With the cee'd, Kia aimed for a more mature design. Not mature as in the demographic of the target market. Rather the design output of a company that doesn't need to fall back on gimmickry and ostentation to get noticed. Sit inside the cee'd and you'll be impressed. Schreyer and his team benchmarked the best European cars in order to give Kia something substantive to aim at and when it came to interiors, he was able to share a little of what he knew of his ex-employers' best practice. Quality fabrics, doors that 'thunk' shut and thoughtful approach to design make the cee'd a landmark Korean car. The plastics quality is still a little hit and miss and the orange dash lighting isn't overly easy on the eye but let's not be patronising and proclaim the car as 'a lot of metal for your money' or any other such bunk. This Kia is a good car, full stop. The cee'd is available in five-door hatch and SW estate bodystyles. If you want a 3-door you'll need the sportier pro_cee'd model. Trim levels open with the S models which feature air conditioning, six airbags, a stereo that can accept MP3 file inputs from the CD, a trip computer and 15-inch steel wheels. Step up to the GS model and you'll get 16-inch alloy wheels, a better stereo with an auxiliary socket for docking your iPod to, remote locking and electrically adjustable and heated door mirrors. The plush LS adds climate control, part leather upholstery and front fog lamps, while the Sport takes a slightly sportier tack with 17-inch rims, sports seats and black bezel headlamps. 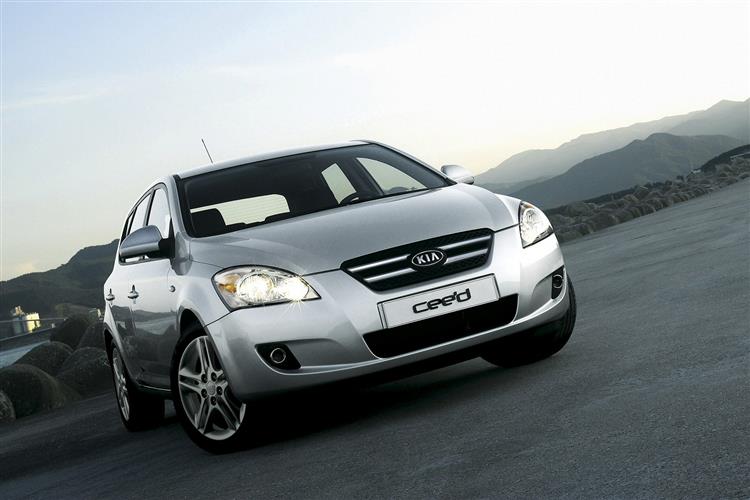