Success can be a double-edged sword. While it's great to reap the financial rewards of huge sales, it can also make designing a replacement that much trickier. Still, as problems go, it's a nice one to have. Mazda were faced with just such a predicament when they came to replace the second generation MX-5. Although evergreen was a word often used to describe this car, all vehicles have a shelf life and the Japanese company couldn't afford for this one to overstay its welcome. The third generation car was a bit bigger, a whole lot smarter but still true to the original formula. A used buy remains one of the safest roadster purchases you can make.

First a brief recap on the Mazda MX-5 to date. Introduced to rave reviews way back in 1991, the MX-5 rapidly became an institution, shamelessly aping classic British sports cars but without the flaky build quality. The second generation model arrived in April 1998. The pop-up headlamps were ditched in favour of fixed lights, the engines were made more powerful and the vinyl zip out rear window was upgraded to a proper glass item. Twin airbags were fitted and the S model received a Torsen limited slip differential. Somewhat unbelievably, a low fuel warning light wasn't fitted until 2002 when the range underwent a mild freshening. The third generation model debuted in September 2005 and although it was a little bigger and heavier, the styling rejuvenated the car, being a bit edgier than before, and the introduction in September 2006 of the Roadster-Coupe model with a folding hard top further broadened the appeal to customers who wanted the handling of the MX-5 but weren't enamoured of a fabric roof.

What You Getword count: 351

While the philosophy hasn't changed a great deal from the original car, the execution of this third-generation MX-5 is quite different. Gone are the curvy 'Coke-bottle' flanks of the old car, replaced instead by a cleaner, slabbier look. Viewed in profile, the differences aren't huge, but from front and rear, there are quite fundamental changes. The wheel arches are considerably beefier, allowing the fitment of big alloy wheels. To accentuate the tapering shapes of the body, the headlights and tail light are, somewhat unusually, mounted well inboard of the corners. One thing that didn't really need a lot of changing was the car's hood. Even now, there are plenty of prestige manufacturers who have never got anywhere close to the simplicity and elegance of design of the MX-5's original rag top and the latest car doesn't divert too far from that base. The Z-folding roof unclips with one central latch and is then throw down flush with the car's rear deck. It would have been sacrilege to burden the MX-5 with weighty folding tin top with a million and one electric motors to blunt performance but Mazda couldn't resist the modern trend for movable metal roofs entirely. Instead, they designed a folding hardtop that sets new standards for lightness and simplicity. That's why buyers who really don't want the cloth top MX-5 can turn to the MX-5 Roadster Coupe. One area where the MX-5 was starting to fall off the pace quite obviously was in terms of interior design. Roadster buyers want a little visual pizzazz and the acres of black plastic and low rent trim hamstrung the company in their bid to present ever more upmarket variants of the MX-5. The MK3 car is a whole lot smarter inside with a T-shaped dash layout housing a neat centre console, while the driver-focused dials feature metallic bezels to lift the ambience. The speakers, gear change gaiter, ventilation controls, air vents, main dials, cupholders and steering wheel boss all follow a circular theme. The quality of trim material is way higher than before with a high-gloss piano black finish across the fascia. 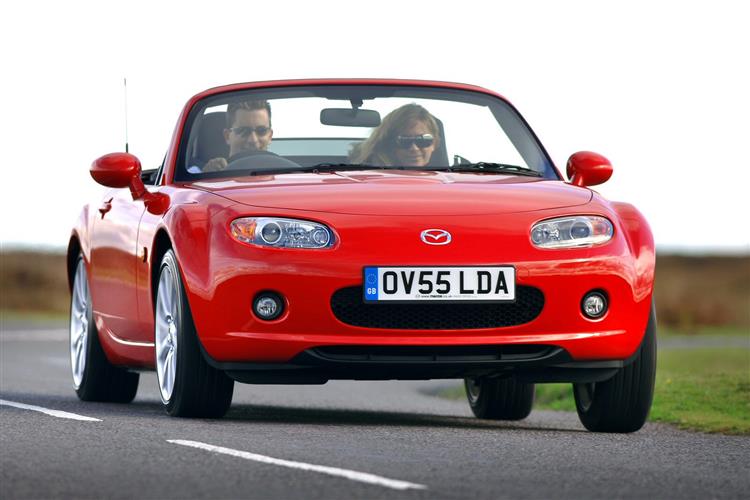