OFF ROAD BUT NOT OFF MESSAGE (some text hidden)

Picture the scenario. You quite fancy something that can take the rough with the smooth but don't want to put up with the coarseness of most 4x4s. In order to get a 4x4 with a bit of refinement that either means one of the latest generation of soft-roaders or a very expensive full-sized model along the lines of a BMW X5, a Mercedes M-class or a Lexus RX. The alternative is an estate-based 4x4, a genre popularised by the Subaru Forester and subsequently cashed in on by Volvo with the V70 Cross Country and Audi with the Allroad. The Audi model in particular showed how well the job can be done if a whole heap of development money is thrown at the problem. The Allroad (later the A6 allroad) is a far more sophisticated proposition than the Volvo and remains one of the most desirable load luggers about. Used examples are around in good numbers, but don't expect any outrageous bargains.

Audi didn't approach this Allroad in a half-hearted manner. Reasoning that their 4.2-litre V8 engine would be too bulky in the nose of a dual-purpose vehicle, the Ingolstadt company instead opted for their two most impressive V6 engines, the 250bhp 2.7-litre turbocharged petrol unit, itself a detuned version of the awesome S4's powerplant, and the 180bhp 2.5-litre turbo diesel, the choice for those who were more inclined to put the Allroad's mud plugging credentials to the test. Arriving in April 2000, the Allroad was an instant hit and demand in the used arena has remained correspondingly high, plumping up residuals. Although the regular A6 range received some light revisions in autumn 2001, the Allroad carried on much as before. A 300bhp 4.2-litre V8 range-topping variant was announced in Spring 2003. A new Allroad based on the next generation A6 Avant arrived in the Spring of 2006.

What You Getword count: 303

Assuming you're not a farmer or a park ranger, owning a full-sized 4x4 makes little practical sense. They're heavy, thirsty and usually no fun to drive. In fact, their only redeeming feature is that on one day in a hundred, they can get you where you need to be. But what if an ordinary estate car could do that? What if you could have the rough, tough ground clearance of a Land Rover Discovery and the traction of a Land Cruiser with the luxury of a Range Rover? And what if it would make sixty in 7.4s on the way to 147mph? Others promised - and failed - to deliver this combination of virtues. Subaru's Forester and Volvo's V70 XC are fine on wet grass, rutted tracks and muddy car parks but not much good for really rough fields, slopes too steep to walk up, particularly bad ruts or sharp gullies. They are, in other words, fine when it's a bit slippery but no real good for really exploring. Which of course is why people buy fully-fledged off roaders. You may never go chasing buffalo in the Serengeti but there's nothing to beat the feeling that you could if you wanted to. Mind you, whether the Audi Allroad provides this feeling is a matter of some debate. It doesn't look like the kind of car that could complete a jungle expedition: based as it is so closely on an A6 Avant, your neighbours will simply assume you've bought an executive estate. Nor are you seated in the usual high and imposing place at the helm: you sit low down, just as in any other car. All of the usual A6 Avant advantages apply with the added bonus that much of the transmission is even tougher. An A6 on steroids? Sounds alright to us. 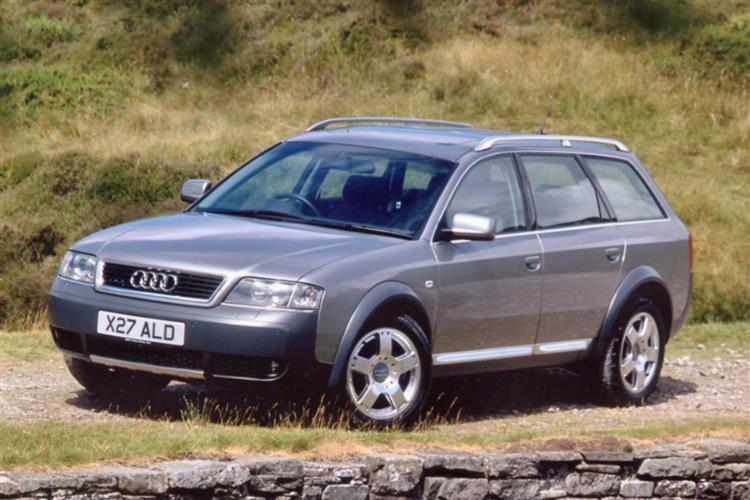