www.caranddriving.com
The independent definitive Lexus IS (2005-to date) video review

The Lexus IS range had long been viewed as a very talented, if slightly derivative, underperformer. With the second generation car, it achieved an identity all of its own and along with that came genuine reasons to buy it other than not liking or being able to afford a BMW 3 Series. With outstanding build quality and peerless dealer backup, the MK2 IS might just be the most stress-free used executive car around right now.

If anything, Lexus downplayed quite how far the second generation IS model had come at its launch, relying instead on the car's sharp styling to get it noticed. The previous generation model was a looker in its own right but many of the design cues that looked so daring in 1999 looked a little dated some six years later. The second generation model was tauter but less ostentatious. It was also a smaller range, shorn at launch of the punchy three-litre petrol engine and the SportWagon estates. What was offered rectified a glaring gap in the old line up - a diesel engine. Cars arrived in UK dealers in December 2005 and received warm reviews from press and public alike.

What You Getword count: 437

The second generation Lexus IS has to be one of the most photogenic cars ever seen in the compact executive class. If the amount of digital images captured at its Geneva Motor Show launch could be converted into sales, the IS would probably outstrip BMW's latest 3 Series by two or three to one. Much of this is attributed to what Lexus calls its L-Finesse design philosophy. Car designers have justly developed a reputation for taking themselves rather seriously and it's not hard to see why when L-Finesse is described as being composed of three fundamental elements, Incisive Simplicity, Intriguing Elegance and Seamless Anticipation. Translated from PR speak, L-Finesse is a way of clothing the car in sheet metal that looks as if it has been shrink wrapped onto the car's frame. The end result is a very taut, muscular looking car with origami-sharp swage lines and very painstakingly finished detailing. Bigger than its predecessor by 90mm in length and 75mm in width, the latest IS looks sportier and unapologetically Japanese. Try imagining this car wearing an Audi or Saab badge. It's quite impossible. One of the key design elements of the old MK1 IS - the chronograph style instruments - has been been dropped in favour of a more conventional fascia. This means that although the quality and ergonomic excellence of the IS interior is virtually beyond reproach, there's now no longer a signature styling point to really catch the eye. The side air vents at first seem a little oddly positioned, but Lexus attribute this to the principle of 'Hazushi' - to 'shift out of phase'. This expresses the notion of something that is part of the whole but, at the same time, retaining its independence. A strong and independent air vent must be a happy air vent. One complaint levelled at the old IS was the rather tight rear quarters and the addition of another 60mm to the new car's wheelbase has done much to solve this problem. Consult the specification sheet and it becomes apparent that in one fell swoop, this IS has gone from being one of the meanest in terms of rear knee room to the top of the class. One area that was rarely questioned was equipment provision and the IS nails home its advantage yet further. You could be listening to CDs on four speakers in your BMW, or six if you're feeling a little flush when it comes to ticking the options boxes. The IS features 13 speakers as standard and a six CD autochanger that will handle MP3 and WMA files. How's that for a crushing advantage? 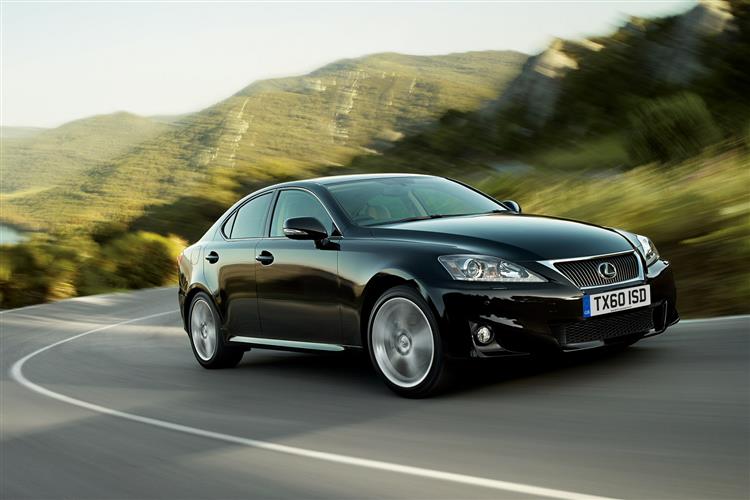