The Mercedes EQC is a large luxury SUV that's fully electric but it's very much a product typical of the Three Pointed Star. It's extremely class-competitive in terms of things like driving range, cabin practicality and charging time replenishment. And arguably segment leading in terms of interior finish and driving refinement.

As the biggest premium automotive brand in the world, Mercedes has been a little slow off the mark when it comes to full-electric technology. A decade ago, an 'E-Cell' version of the A-Class was piloted with a few buyers; a few years on from that, there was a battery-powered version of the old MK2 model B-Class co-developed with Tesla; and there've been various battery-powered smart models. That's been about it though, for full-EVs from the Three-Pointed Star. Until the launch in the Spring 2018 of this EQC Crossover. It's directly aimed at three arch-rivals, the Audi e-tron, the BMW iX3 and the Jaguar I-PACE. How does it stack up? Let's find out.

This EQC's 80kWh battery is of slightly lower capacity than the one you'll find in either of its two biggest rivals, the Jaguar I-PACE and the Audi e-tron quattro 55, but it doesn't affect the eagerness of this car's drive dynamics in comparison to these key competitors, thanks to a slightly greater torque output. Because this Mercedes is lighter than the Audi, the EQC can also slightly improve upon that Ingolstadt model's total potential driving range, managing a potential 259 mile WLTP-rated figure that's 10 miles higher. On the move, all electric vehicles are of course very quiet, but this one is particularly silent, Mercedes having taken great trouble to reduce the levels of road and tyre roar that always become more evident at the wheel of any EV. There's plenty to get to grips with if you're to make the most of the EQC driving experience. There are five driving modes ('Comfort', 'Sport', 'Eco', 'Individual' and 'Maximum range'); and five different battery regeneration programs (the latter selectable via paddles behind the steering wheel). There's also an 'auto' regeneration mode that uses the car's speed limit detection, navigation systems and radar cruise control to blend the regenerative braking of the electric motors up and down automatically. Switch to 'Sport' and it's certainly quick, thanks to a 408hp total output and 765Nm of torque. As a result, 62mph from rest occupies just 5.1s, but the top speed is limited to 111mph. 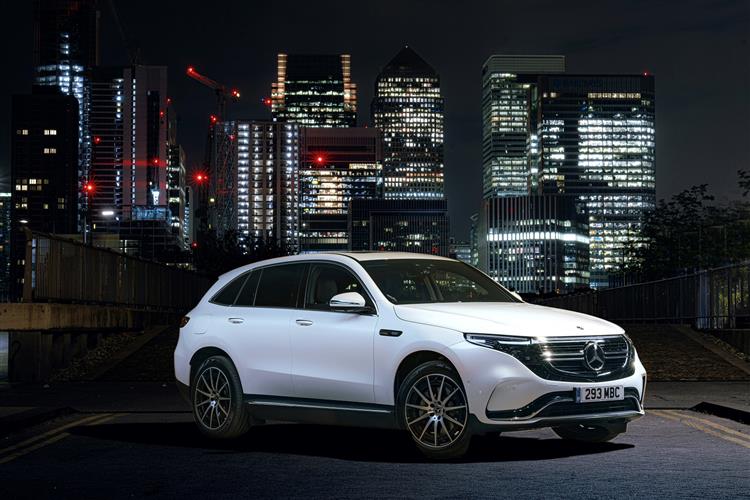