The Continental GT marked a massive shift in focus for Bentley and did more than a little to shake up the whole of the super luxury coupe sector. This third generation model could well move that segment a further step forward. Jonathan Crouch reports.

The third generation Bentley Continental GT coupe aims to be the kind of rewarding driver's car its predecessor always should have been. That's thanks to engineering from Porsche and an all-new MSB platform. Yet at the same time, it claims to deliver even more luxury thanks to an exquisitely design cabin with a range of very special touches.

Early Bentley models were sports cars. More recent ones have been luxury GTs. Can the company really produce a car able to combine both elements? The original Continental GT was a consummate Grand Tourer, but it wasn't really a choice for driving enthusiasts. With this third generation design, the brand reckons it can do a much better job of satisfying these people. You'd expect that would be the case. After all, in its first two generations, this Bentley was based on a platform from an old fashioned Volkswagen Phaeton saloon dating back to the turn of the century. This MK3 model in contrast, shares its lighter, stiffer chassis with the very latest second generation Porsche Panamera. That car also donates a quicker-reacting dual clutch gearbox and there's a more sophisticated 4WD set-up too. So, should lottery winners form an orderly queue? Let's find out.

Under the bonnet, buyers choose between either a twin turbo W12 TSI 6.0-litre engine with 626hp or a 4.0-litre twin turbo V8 with 542hp. The W12 was the powerplant we tried, mated to a far more modern automatic gearbox, the twin clutch PDK transmission used in Porsche's Panamera. In fact, much about this car is shared with the Panamera, including the new lighter, stiffer, stronger MSB platform, though in this case, it's 200mm shorter in keeping with this model's Coupe remit. This chassis, Bentley hopes, will play a major part in making this second generation Conti GT model the rewarding driving machine its predecessor never truly was. That's not only because it's torsionally stiffer - though that obviously helps - but mainly because it supports an engineering format that sees the wheels pushed further forward and the engine moved rearward, so considerably improving weight distribution. Another key change lies with the introduction of a new all-wheel drive system. The old set-up featured a fixed 40:60 split between front and rear wheels and left the car understeering rather easily when you tried to push it along. In contrast, the new Active All-Wheel-Drive' package can constantly vary front-to-rear torque split depending on the driving situation and deliberately leaves the car using rear wheel drive as much as possible. As before, there's air suspension, now a three-chamber system that works in conjunction with the clever 48V electro-mechanical anti-roll bars first seen on the Bentayga. Suspension feel is one of the things you can influence via three provided driving modes - 'Sport', 'Comfort' and 'Bentley'. Steering feel and throttle response also get tweaked with the settings. 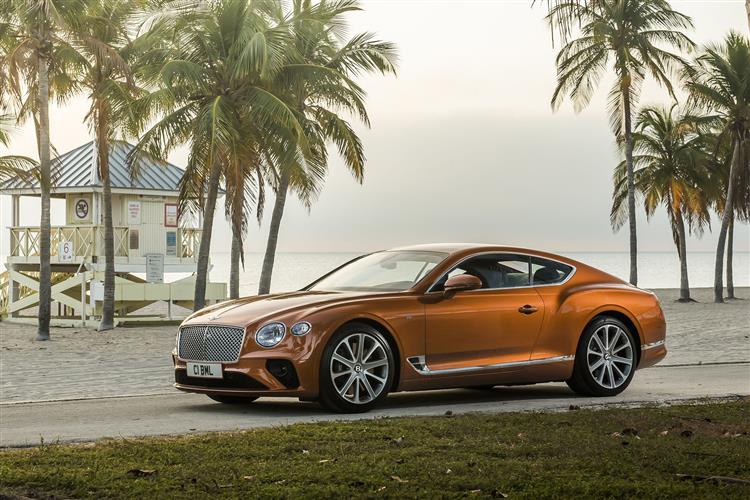