AN ESSENTIAL LEXUS (some text hidden)

The ES is the most important full-Executive-class saloon the Lexus brand has yet brought us. Jonathan Crouch takes a look.

The Lexus ES is a full-sized Executive saloon that might get forgotten in a segment dominated by cars like the BMW 5 Series, the Mercedes E-Class or the Audi A6. Yet it doesn't deserve to be. It offers (non-Plug-in) petrol/electric power for less than you'd pay for a smoky diesel version of a Teutonic competitor. And much more equipment too. If you want to spoil yourself in this segment and luxury and low running costs take precedence over drive dynamics, the ES could be an appealing package.

It was time to do something different. Lexus has never made much impact on the full-sized Executive segment through four generations of its GS saloon. It was rear-driven, just as the brand thought Mercedes E-Class, BMW 5 Series and Audi A6-segment buyers wanted. But it remained a minority, left-field choice. So the company's started again in this sector with this car, the ES. It's not a familiar nameplate in Europe but on the other side of the Atlantic, the ES (or 'Executive Saloon') model line dates back to 1989 and has amassed 2.3 million sales. Cynics say the ES is simply a poshed-up version of Toyota's largest world market saloon, the Camry. It's front-driven, like that car, is built in the same American factory and shares quite a bit of the same engineering. Lexus, in response, points to the huge design differences between the two models. And to the fact that the development sharing that has taken place has allowed them to price the ES below German diesel rivals, yet offer more sophisticated petrol/electric hybrid technology and higher levels of equipment.

So what's the ES experience like? Very quiet, is the answer at the wheel of the ES300h petrol/electric hybrid version, which is the only one on offer in our market. Silence when first you begin and push the starter button. Silence when you ease through slow-moving rush hour traffic, the engine cutting in only above 25mph, unless you've a particularly heavy right foot. Like most hybrids, the car can trickle along powered by the battery pack only (as it is from start-off) or more usually, with a combination of both battery and engine, something you can monitor via a graphic display in the centre of the dash. Of course, you don't get the kind of pulling power that would be on offer from a rival four cylinder diesel model from rival models in this segment. This ES hybrid's 2.5-litre powerplant puts out 215bhp and only 221Nm of torque. Plus as usual with a Lexus Synergy Drive powertrain, you must have it mated to a belt-driven CVT auto gearbox that, when you need rapid power, tends to encourage engine flare but not a great deal of noticeable extra forward motion. Talking of that, 62mph from rest if you're really pushing on can be dealt with in 8.9s en route to 112mph. And there's a 'Drive Mode Select' system with 'Eco' and 'Sport' settings, depending on how you want to drive. The front driven layout doesn't have the bite of rear-driven German competitors at speed through the turns, but few likely Lexus buyers will care about that. 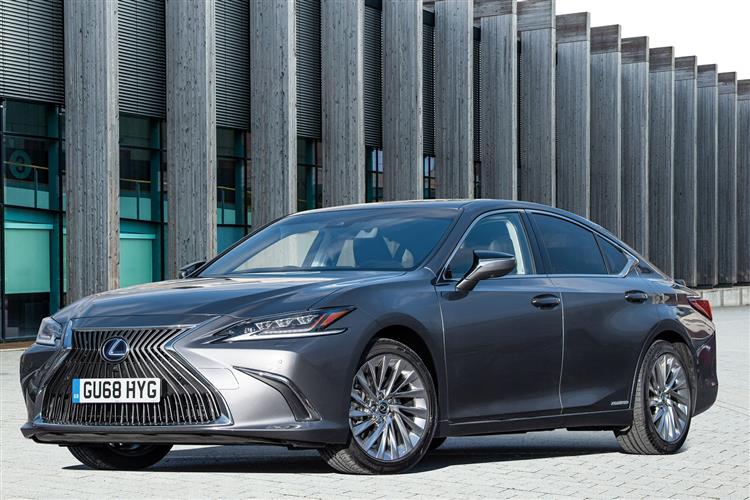