The Kia e-Niro offers another spin on full-electric technology to buyers in the mid-sized Crossover segment. Jonathan Crouch reports.

Kia's full-electric e-Niro is now on offer with a choice of 39kWh or 64kWh battery packs. The larger-capacity variant offers nearly 300 miles of WLTP-rated battery-powered driving range and a progressive package that buyers prepared to consider paying around £35,000 for this kind of car will probably like. The full-electric part of the mid-sized Crossover segment is presently quite a small one, but you can bet it will quickly grow, and cars like this are the reason why.

Kia hasn't set out to re-define the electric vehicle market with this e-Niro model, but it does want to try and further perfect what a car of this kind is capable of offering. We've already seen both hybrid and Plug-in hybrid versions of this Niro. Here Kia has completed its set of electrified powerplants with this full-electric version. It shares its engineering with Hyundai's Kona Electric, but is a little less overtly SUV than that car. Ready for a battery-powered vehicle yet? The tipping point is getting closer...

Let's talk WLTP-rated range. The base 39kWh version goes up to 180 miles between charges. For the 64kWh models, that figure rises to as much as 282 miles (or up to 382 miles on the WLTP City Cycle). Of course you won't get anything like that on the open road if you use the performance on offer. The 64kWh e-Niro is equipped with a long-distance battery pack paired with a 201bhp (150kW) motor, producing 395Nm of torque, enabling the car to accelerate from 0-to-60mph in just 7.5 seconds. Like the Niro Hybrid and Plug-in Hybrid variants, this electric model is front-wheel drive. The battery pack is located low down in the body, between the two axles, giving this crossover a centre of gravity more akin to that of a saloon or a hatchback. With a relatively wide stance, the e-Niro should offer drivers a reasonable feeling of stability on winding roads. The car is equipped with fully independent rear suspension, tuned to deliver high speed and immediate handling responses and filter out small vibrations at higher speeds when travelling over poor surfaces. The e-Niro's regenerative brakes - 305 mm in diameter at the front, 300 mm at the rear - exhibit a consistent, linear deceleration and braking feel, and harvest kinetic energy to recharge the battery pack on the move. 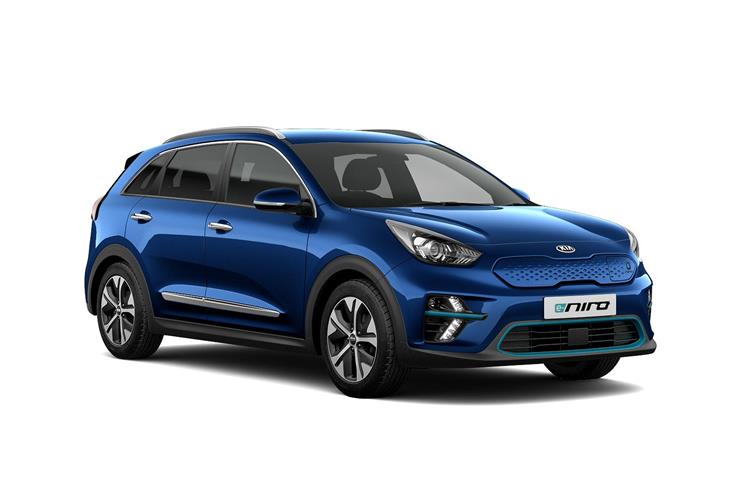