THE ROUGH AND THE SMOOTH (some text hidden)

We already have a whole lot of time for Volvo's V60 estate, but giving it the Cross Country treatment can only broaden its appeal. Buyers get a choice of mild hybrid petrol and diesel engines, with eight-speed automatic transmission and permanent all-wheel drive as standard, plus an off-road driving mode. It's not cheap, though.

Be honest with yourself. Do you really need an SUV? Chances are you don't. You might just be buying one because you like sitting up high, or you think you're going to come off better in a crash or maybe just because you think you ought to have one. Now, you're clearly within your rights to choose exactly whatever you've earned the money to afford, but buying an SUV comes with a whole bunch of downsides that their manufacturers don't want you to know about. The laws of physics being what they are, nothing comes for free. Added size is added weight, extra fuel thirst, compromised handling and less effective braking. If only there was a smarter way to get that rugged, go-anywhere look without all of the lard. You can see where I'm going with this can't you? Yep, Volvo delivers just that in the shape of this much improved second generation V60 Cross Country model, arguably a smarter solution than the average mid-sized premium-branded SUV.

Volvo offers two choices under the bonnet of this MK2 model V60 Cross Country, the 197hp B4 mild hybrid diesel engine being the unit most choose. It endows the Cross Country with a braked towing capacity of 2,000kg. An alternative B5 mild hybrid petrol unit with 250hp is also on offer. Permanent all-wheel drive comes as standard, along with 60mm more ground clearance than you'd get in an ordinary V60. Plus this Cross Country version also gets Hill Descent Control and an Off Road Drive Mode setting. So as you can tell, it's much more suitable for rough road treatment than the previous generation V60 Cross Country model. Hill Descent Control automatically controls the car's speed down a steep slope, while the Off Road setting alters the operation of the constantly variable all-wheel-drive system and the responsiveness of the engine, gearbox and accelerator pedal to help when negotiating tricky terrain below 25mph. The previous V60 Cross Country couldn't really match the sharp handling reactions of its premium German rivals but there's a significant improvement in that area this time round thanks to the installation of the stiffer, more sophisticated 'SPA' 'Scalable Product Architecture' platform we've also seen used in the company's XC60, XC90, S90 and V90 models. As usual with Volvos, there's a standard 'Drive Mode Settings' system, one of those set-ups now familiar in this segment that can tailor throttle response, steering feel and auto gearshift timings to suit the way you want to drive. Plus there's the option of adding in Volvo's 'Pilot Assist' system. This is a set-up that at cruising speeds of up to 80mph can effectively drive for you. 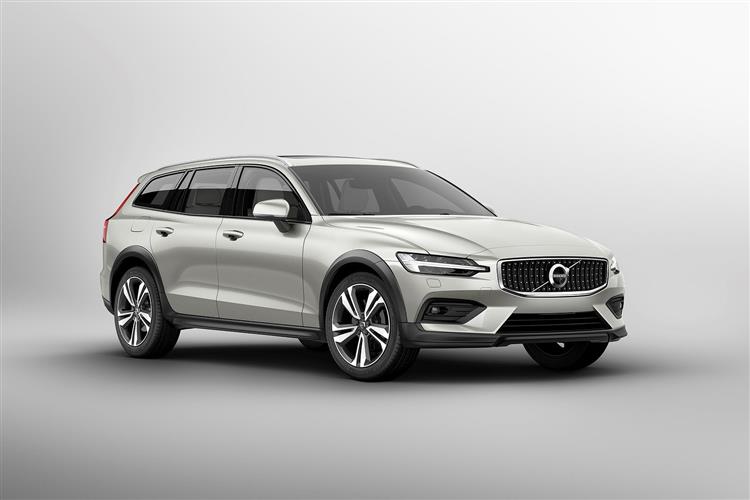