Think of a Mitsubishi Outlander SUV and you tend to think of Plug-in Hybrid power. The brand also though, offers a conventional 2.0-litre 150PS petrol version, which is much more affordable and will be a better bet if you regularly tow or drive off road. Plus it gives you the third seating row that PHEV variant buyers can't have. And it undercuts most of its 'D'-segment SUV rivals on price. For sure, you get old-school virtues here, but there's certainly still a place for this Mitsubishi in this form.

We first saw this third generation Outlander design back in 2013, when it was launched with a 2.2-litre DI-D diesel engine. The PHEV version followed in 2014 and instantly transformed the Plug-in hybrid market segment across Europe, racking up over 115,000 sales in the following four years. By 2018 though, the Outlander was facing greater challenges: not only the age of its design but also the abolition of the UK government Plug-in Car Grant that had previously done much to promote sales of the PHEV version. Mitsubishi's response was delivered in two parts. Firstly, the brand introduced significant changes to the Outlander PHEV, including a fresh 2.4-litre petrol engine mated to improved electrical technology, plus there was a classier cabin. The idea was to reassure buyers that this variant really could justify premium pricing. For those unable to stretch to the required asking figures but still wanting an Outlander, the brand changed its approach with regard to its range of conventionally-engined models, deleting the 2.2-litre diesel option and offering instead the more affordable 150PS 2.0-litre petrol powerplant we look at here.

If you're of the opinion that many family SUVs have just become estate cars with a little more ground clearance and a largely redundant all-wheel drive system, you might well like the conventional 2.0-litre 150PS petrol-powered version of this Outlander. Despite its modern styling, there's something quite old school in the way that it drives, and I mean that as a compliment. Set off down the road and the feeling you get is that of being in a 'proper' SUV, rather than some sort of ineffectual crossover vehicle. You sense the meatiness of the steering and the gutsiness of the 2.0-litre petrol engine and realise that this is a vehicle you'll be able to rely on, a car that'll work with you, even in a tight spot. 62mph from rest in this entry-level Outlander model occupies 13.3s en route to a maximum of 118mph. And there's 195Nm of torque, enough pulling power to facilitate a 2.0-tonned braked towing capacity that's half a tonne more than the alternative hybrid derivative can manage. Like the PHEV, this 2.0-litre petrol variant can only be had with an automatic gearbox, but it's a very different one, a more conventional INVECS-II transmission that's tuned to help with towing and off roading. There are three driving modes provided: '4WD ECO' is the setting you'll need to get anywhere near the quoted fuel returns - 37.7mpg on the combined cycle and 171g/km of CO2. Here, the car is powered through the front wheels nearly all the time, only sending drive to the rear when a loss of traction is sensed. There might not be too many occasions when you'd bother to switch to the second 4x4 setting, '4WD Auto', a mode which duplicates much the same functionality but operates the car less economically. Finally, there's a '4WD LOCK' mode that you'll only need if your Outlander ends up somewhere you really shouldn't have ventured with it in the first place. 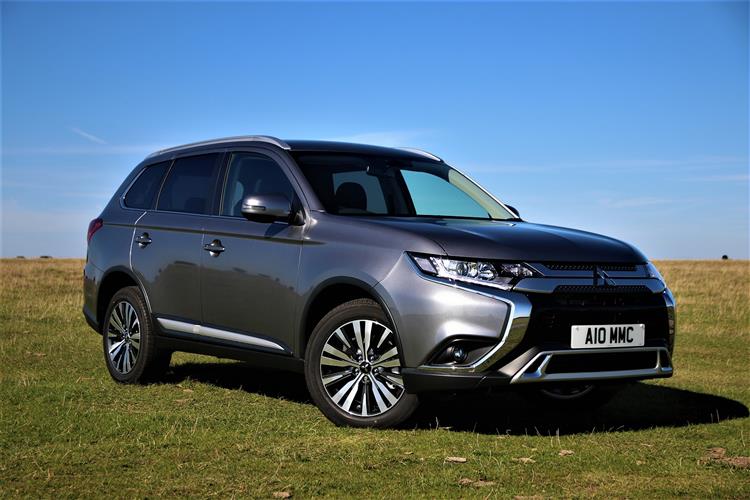