THE SUVIP (some text hidden)

The Mercedes-AMG GLC 63 4MATIC+ is the quickest mid-sized SUV you can buy. Jonathan Crouch takes a look at the revised version.

The SUV segment is a profitable niche for car makers - and the high performance end of it even more so. Here's a revised version of the model that claims to rule the mid-sized part of that segment, the thunderous V8-powered Mercedes-AMG GLC 63.

No other brand has more experience in high performance SUVs like this one, the Mercedes legacy in this market niche dating back to 1999 and the fast but rather wayward ML55. The company's AMG tuning division in Affalterbach has got rather better at producing go-faster versions of Mercedes products since then - they're now good for corners as well as straight lines - and it really shifted up a gear with the introduction of the 4.0-litre V8 we first saw in the AMG GT performance sportscar in 2014. Since then, that twin turbo engine has been fitted into a variety of Mercedes-AMG products, including the C63 and E63 models that share much of their engineering with this top GLC. Here, it can put out as much as 510hp and a thumping 700Nm of torque, that latter figure enough to embarrass this car's most direct segment competitors, the Porsche Macan Turbo and the Alfa Romeo Stelvio Quadrifoglio. Quite a prospect. Let's put this car to the test.

The world may not need a mid-sized SUV with around 500hp, but you might - and if you do, then this Affalterbach-engineered AMG model is a tempting lottery-winner's confection. It uses much the same 4.0-litre twin turbo V8 that you'll find in the AMG GT sportscar, which aurally is on another level from the V6 engines you'll find in direct rivals. Here, this powerplant puts out either 476hp or 510hp, depending on your choice between standard or 'S'-spec versions of the two body styles on offer, the boxier 'SUV' variant or the trendier 'Coupe' body shape. Whatever your preference, you get 4MATIC+ 4WD and a 9-speed 'AMG SPEEDSHIFT MCT' auto gearbox with an in-built 'RACE START' function. Use this and your kidneys will be thrust to the back of your rib cage as this car hurls itself forward from rest, reaching 62mph in just 4.0s in the standard GLC 63 - or 3.8s in the GLC 63 S model. But this car has more to offer than just straight line speed. Depending on the engine, up to six drive programs are now available with this revised model: "Slippery", "Comfort", "Sport", "Sport+", "Individual" and (on the 'S' model) "RACE". Intuitive cornering assistance is delivered by the standard rear limited slip differential, which is mechanically-operated in the standard GLC 63 and electronically-driven in the 'S' variant. The steering's more feelsome than we were expecting it to be too - though the rack still doesn't have the feedback you'd get from a rival Porsche Macan Turbo. Three-chamber air springing and adaptive adjustable damping comes as standard, but it's a very firm set-up, even if you keep the car in the softest of its three available damping modes. Potential buyers will have to decide whether or not they can live with that. As usual with a Mercedes model, there's a 'DYNAMIC SELECT' driving modes system that allows you to tweak steering feel, throttle response, gearshift timings and the throaty sound of the optional AMG performance exhaust. 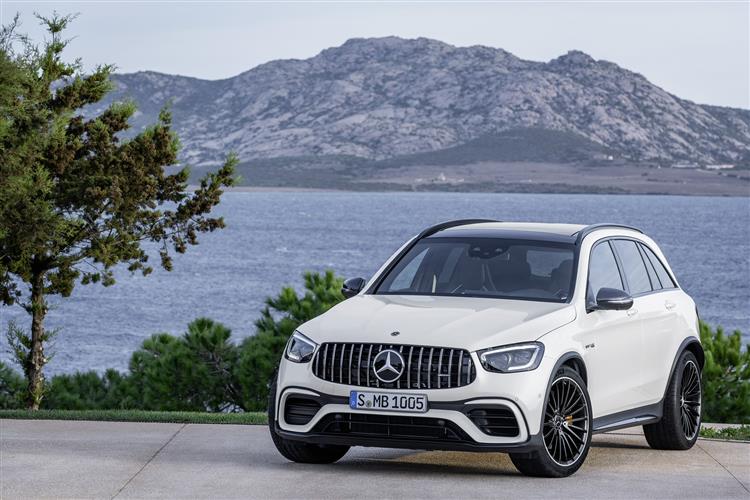