RETURN OF THE ST (some text hidden)

Ford aims for continued leadership of the supermini-shaped hot hatch segment with this car, the third generation Fiesta ST. Jonathan Crouch takes a look at what's on offer.

Want to know just how much fun it's possible to have in a ferociously fast small supermini? Then try one of these - Ford's Fiesta ST. It's been developed like a proper performance car - and drives like one, ready to paint a smile upon your face corner after corner. This time round, a 1.5-litre three cylinder engine replaces the old 1.6-litre 'four', but power's up to 200PS as standard and we're told the handling's sharper too. Of course, for not much more than the affordable prices Ford asks, you can buy more power. But after a drive in one of these, you probably won't want to.

We've never had a truly great sporting Ford Fiesta. The Blue Oval brand has tried of course, building up a hot hatch legacy around this model that goes all the way back to the XR2 of 1981, with a history subsequently embellished by the more powerful RS1800 and RS Turbo models that followed it. All though, were eclipsed by French hot hatch rivals, first a series of small Peugeot GTis, then in more recent years, the Renaultsport Clio. Today's third generation Fiesta ST - this car - must once again take on ever more sophisticated versions of those same two rivals, along with rejuvenated versions of the VW Polo GTI and the Suzuki Swift Sport. It's going to have to be good. But it just might be. Designed by enthusiasts to be driven by enthusiasts, this fast Fiesta's poised, priced to sell and, with 200PS now on tap, plenty quick enough. Potentially, it's the best car of its kind that Ford has ever brought us.

The previous Fiesta ST suffered a little on paper against obvious rivals by not being able to claim a 200PS output - at least in its standard form anyway. An ST200 version was later launched to rectify that oversight. This third generation car has 200PS in its ordinary form from the start, courtesy of a lighter, more efficient 1.5-litre EcoBoost three cylinder powerplant which replaces the previous 182PS 1.6-litre four cylinder unit. 62mph from rest takes just 6.5s on the way to 144mph. Also new this time round are selectable Drive Modes - enabling engine, steering and stability controls to be configured to Normal, Sport and Track settings. The Drive Modes will also adjust this Fiesta's Electronic Sound Enhancement technology and active exhaust noise control valve, which amplifies the sound of the engine note. But power of course is nothing without control - which is exactly where this Fiesta should really shine. With this MK3 model, the track is wider, the steering is quicker, the brakes are beefier and torsional stiffness is up by 8%. Pay a little extra and you can get a 'Performance Pack', which includes a Quaife limited slip differential, launch control and performance shift lights. 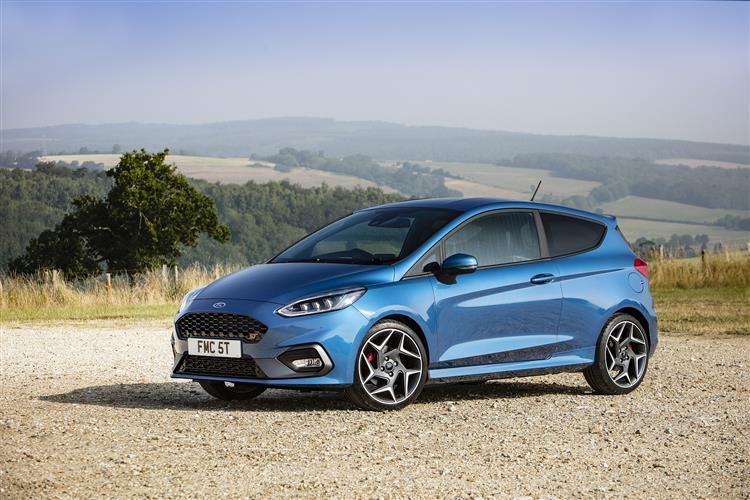