QUICKER ON THE UPTAKE (some text hidden)

With the up! GTI, now lightly improved, Volkswagen rekindles the spirit of shopping rockets past. Jonathan Crouch checks it out.

Volkswagen's up! GTI takes pretty much all of the hot hatch purity that marks out the Wolfsburg brand's larger Polo and Golf GTI models and distills it into something smaller and more affordable. There's a perky 115PS three cylinder 1.0-litre TSI turbo engine, agile handling, light weight and plenty of scope for personalisation. Sounds promising.

I don't remember the original MK1 Golf GTI of the mid-Seventies and I'm almost certain that you won't either. However, Volkswagen tells us that most of what made that iconic shopping rocket truly great is brought back to us by its smallest hot hatch model, the up! GTI. In many ways, it's surprising that there aren't more options for buyers wanting something citycar-sized with a bit of extra zip. If that's your bag, then there's the Abarth 500, the smart BRABUS forfour and... Well not a lot else. Not a lot then for this contender, the Volkswagen up! GTI to beat. But on paper at least, it looks a pretty complete proposition anyway. Volkswagen claims to have lightly revised it but not too much has changed. Not too much needed to.

Some junior shopping rockets require you to thrash the engine within an inch of its life if you're to release respectable performance. The up! GTI isn't like that. The 1.0-litre TSI turbo three cylinder powerplant beneath the bonnet is a reworked 115PS version of the 90PS unit we've tried in the ordinary up! and like that unit, develops most of its punch in the mid-range. So you won't be thrashing about, ramming the rev limiter in the way you would in some rivals. But that doesn't mean this dinkier GTI can't charm you in a different way. Power on and it delivers a fizzy, effervescent feel thanks to sharp throttle response, super-light weight and an engine note boosted with surprisingly realistic drama by the stereo speakers. By modern hot hatch standards, you're not actually going very fast - rest to 62mph takes 8.8s and the top speed, at 122mph, is not much more than your local sales rep's Ford Focus. But you quickly forget about that and adjust to a different brand of performance motoring. You learn to rely on momentum to urge you on from turn to turn, rather than wasteful bursts of planet-sapping power that you'd normally almost instantly scrub off again at the next bend. At Car & Driving, we've got used to needing to hire a track to really explore the limits of the average modern hot hatch. In this case, all you need is a lightly-trafficed stretch of your favourite route back from the school run. On such a road, you'll notice cornering roll's impressively controlled, thanks to revised dampers, stiffer springs, a lowered ride height and a beefed-up rear axle. Yet despite all this - and a bespoke set of 17-inch wheels - the ride remains compliant. We'd like a little more feel from the steering, but it's pleasantly direct. Our only significant issues lies with the gearbox, lifted pretty much straight from an ordinary up!. The shift ought to have been tuned into the spirit of this car, as it has been in some rivals. 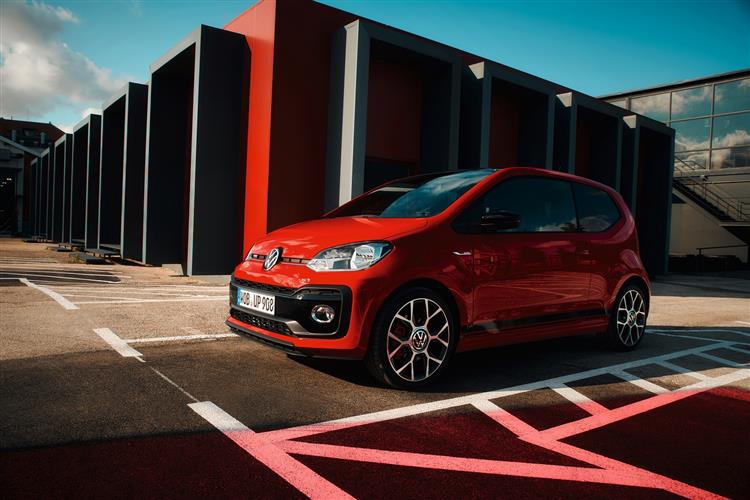