CROSSING OVER (some text hidden)

The second generation version of Subaru's XV crossover model now offers the option of a mild hybrid engine. And it's still more capable off road than you might expect a car in the family-sized Qashqai segment to be. Jonathan Crouch reports.

The Subaru XV has always been a smart-looking family-sized crossover vehicle offering the best all-wheel drive system in its class and some charismatic engines. The original version of this second generation model really just needed a little more running cost efficiency. That's now what's on offer courtesy of Subaru's latest e-Boxer mild hybrid tech - though the previous more conventional 1.6 and 2.0-litre Boxer petrol engines still continue at the affordable end of the range. Overall, we think the XV is, now more than ever, something of an under-rated mid-sized SUV in the Qashqai-class segment. It's the sort of car that will have you praying for snow in the forecast.

The family-sized Crossover. Arguably, it's one of the motor industry's fastest growing market segments, a class of car that's usually these days more about fashion than substance. So what if you could get one with Qashqai-like style matched to Land Rover-like off road capability? What if this class of car, in other words, could actually walk the walk as well as talk the talk? That'd be quite something. That'd be unique. And that's exactly what this second generation Subaru XV claims to be designed to deliver. If any brand was going to be able to create a car able to do this, you'd put money on Subaru to do it. They were building models of this kind way before the concept became fashionable, with a history going all the way back to 1995 and the launch of the Legacy Outback, a chunky all-wheel drive estate then followed by more overtly SUV-like Forester and Tribeca designs. None of which really caught the imagination of British buyers. The XV though, has done better in this regard since its original launch here back in 2012 and took another step forward in this MK2 form, first introduced in 2017. The addition of e-Boxer mild hybrid tech should help this model's cause further.

As before, the volume part of the XV range is made up of two normally aspirated boxer petrol engines, a 114PS 1.6 and a 150PS 2.0-litre unit. Both must be mated to Lineartronic CVT auto transmission. The 1.6-litre variant develops 150Nm of torque and gets to 62mph in 13.9s en route to 109mph. The 2.0-litre model improves those figures to 10.4s and 120mph. Alternatively, XV buyers can opt for the top e-Boxer mild hybrid version. Here, the 2.0-litre 150PS powerplant is embellished by a small electric drive motor with 16bhp and 48 Ib ft of torque. The e-Boxer set-up includes a little lithium-ion battery, allowing for fully-electrified emissions-free motoring for short periods. On the move on tarmac, the hybrid system's electric motor provides a bit more instant pulling power, especially when using the car's provided 'S' driving mode. Steering wheel gearchange paddles are provided and a rear stabiliser has been added for a little more cornering decorum. As ever with a Subaru, all versions of this car uses the brand's unique Symmetrical All-Wheel Drive system, plus it includes the company's X-MODE system. This is designed to increase drivability by optimising integrated control of the engine, the All-Wheel Drive system and the brakes to provide additional control when tyres slip and lose traction on a slippery road surface, including when descending hills. 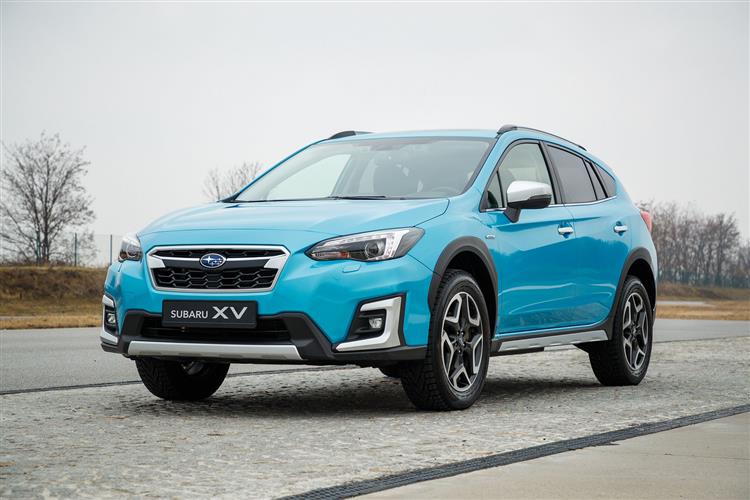