CALL ME A CAB (some text hidden)

Audi didn't really need to improve its A5 Cabriolet, but it has done anyway. This revised version of the second generation version model is smarter to llok at and incorporates the option of more frugal mild hybrid engine technology. Inside, you'll find a classier cabin with Audi's 'Virtual Cockpit' instrument binnacle. And a beautifully integrated fabric roof means almost coupe-like standards of refinement.

For a certain kind of customer, the combination of the Audi badge and a pretty convertible bodyshape seems to be difficult to resist. We saw it with Princess Diana and her Audi Cabriolet in the early Nineties. Then with the huge success of the handsome A4 Cabriolet which dominated the executive drop-top sector in the early years of this century. When Audi's pretty A5 Cabriolet first appeared in 2010, it was an evolutionary step forward from that car. Like its predecessors, the A5 drop-top ignored the prevailing trend for folding metal hard-tops and was smart, relatively practical and very cool. But that didn't mean it couldn't be improved upon and at the end of 2016, Audi duly did just that, announcing this MK2 model, here usefully improved. It's still beautifully built and lovely to look at but is now an even more accomplished way to enjoy the best - and worst - that the British weather can offer.

As a general rule, if you own an executive-class convertible, you probably don't drive it too fast. By cruising along, there's a far better chance you'll be spotted by desirable members of the opposite sex and thus fulfil the primary purpose of this type of car. Of course, should the rain be prevailing or the streets be deserted, Audi has been kind enough to build in some potential for fun. Under the bonnet, a range of TFSI petrol and TDI diesel engines are being offered, with outputs ranging from 163PS to 347PS. Four A5 engine variants are equipped with a mild hybrid system. Here, a belt alternator starter, which is connected to the crankshaft, recovers energy during deceleration and stores this in a compact lithium-ion battery. With the four-cylinder engines, the MHEV system is integrated into the 12-volt electrical system and a 7-speed S tronic auto gearbox is mandatory. There are of course the usual quattro 4WD options. The S5 TDI six cylinder models, now diesel-engined and offering 347PS, use a 48-volt MHEV electrical system, an 8-speed tiptronic auto and of course have quattro 4WD. Adaptive dampers are available as an option. They are incorporated into the standard Audi drive select dynamic handling system and allow the driver to choose between a performance driving bias or a more comfort-oriented profile. The electromechanical power steering offers decent feedback from the road and reasonable steering precision. As an option, dynamic steering which varies its gear ratio depending on the speed and steering angle is available. 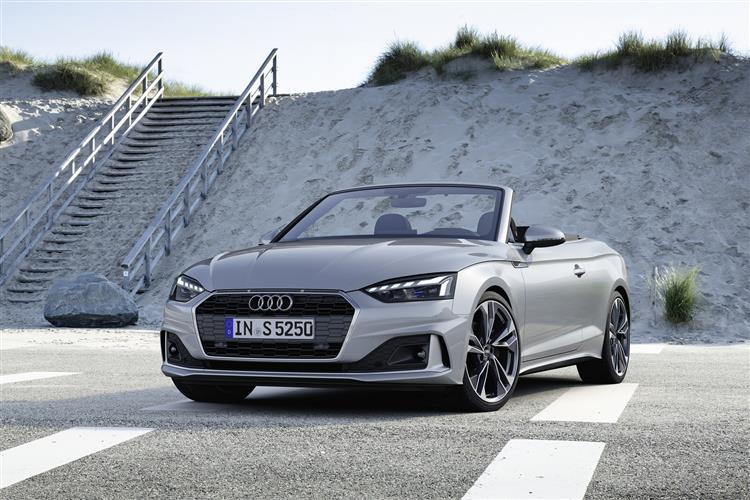