Toyota's C-HR is one of the trendiest compact Crossover model choices you can make. Now it's been improved. Jonathan Crouch takes a look.

Toyota aimed to bring something fresh to the growing compact Crossover segment with its C-HR - and did. Here, concept car looks are matched to proven mechanicals that now offer buyers a choice of hybrid powerplants. If you're thinking of buying something Qashqai-sized in this class or one of the trendier compact models, then this fashionable contender could be exactly what you're looking for.

What if you want a fashionable little Crossover - say, something like a Nissan Juke? If that's the case, you may have been a little put off by the cramped interior and rather average build quality you get with models of that sort. So what if another brand were able to offer you a contender that was even trendier, better made, more efficient and not that much more expensive? You'd be interested wouldn't you? Well that's apparently exactly what's being offered here in the form of Toyota's C-HR. 'C-HR' is supposed to stand for 'Coupe High-Rider' and sure enough, this car has a very coupe-style look. More importantly, we're told that it drives in a coupe-like way too. Sounds promising doesn't it? Let's check this model out.

The C-HR is being offered with two petrol/electric hybrid engines from Toyota's Corolla hatch, the original 120bhp 1.8-litre self-charging unit now joined by a perkier 182bhp 2.0-litre powerplant. Either way, you're looking at front wheel drive and a CVT auto gearbox. For the C-HR, Toyota has made its hybrid system lighter and more efficient, and engineered it to give sharper performance. The brand has worked hard on giving these two powerplants high levels of thermal efficiency and the various hybrid components have been made light and small, while being positioned for tight packaging. As for handling, well this Toyota aims to set a fresh standard in a segment not noted for sharply-responsive models. The engineers realised that the major issue with taller Crossovers of this sort related to bodyroll and its detrimental effect on ride comfort. Huge efforts have therefore gone into structuring this model's TNGA platform and giving it a low centre of gravity so that the car doesn't pitch about through the corners. Steering feel has been emphasised too, something else that tends to be lacking on this class of car. As a result of all this effort, Chief Engineer Hiroyuki Koba is convinced that a C-HR handles up to a standard comparable with any conventional Focus-segment hatch. 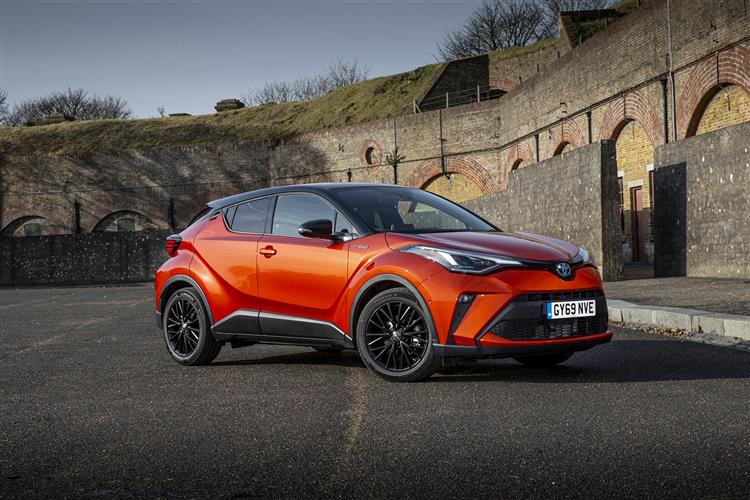