Here's a very different-looking Nissan Micra. If like many of us, you'd always seen this model line as a rather boring, predictable choice in the supermini segment, it's probably time to revise those opinions. This 'Gen5' version is better in virtually every way - as Jonathan Crouch discovers.

When the first Nissan Micra appeared more than 30 years ago, it marked a revolution in the small hatchback segment and opened a new chapter for Nissan. This fifth generation Micra, we're told, is just as revolutionary, and is intended to raise expectations for what a small hatchback can, and should, deliver to its customer.

The little Micra is a very significant car in Nissan's history. Originally launched in the early Eighties, in second generation form it became the very first Japanese model to win the European Car of the Year award, the first Far Eastern supermini purpose-built for Western tastes. To make absolutely sure, Nissan decided to build the car in Britain and style the second and third generation models with a daring flair that perfectly suited a small car market becoming ever-more image-conscious. These were cars perfectly in tune with their times. That was less the case though, with the fourth generation version, which arrived here at the very end of 2010. Out-sourced for build in India, this MK4 model was intended to be cheap as a result. The problem was that it rather felt it and as a result, sales were disappointing. The Micra should have been one of Nissan UK's top sellers. Instead, it lagged behind the company's niche Qashqai, Juke and Note models. But forget all of that now. This French-built 'Gen5' version is a very different proposition - as we're about to discover....

Under the bonnet, buyers get a 1.0-litre petrol engine in two flavours. Most choose the IG-T 100 unit, which develops 100hp and is offered with either 6-speed manual or automatic transmission. There's also a perkier DIG-T 117 unit borrowed from the Juke SUV developing 117hp and only offered with manual transmission. Of great importance here are the efforts that have been put in to improve the way that this Micra 'Gen5' drives. This model features what Nissan calls 'Active Ride Control' for enhanced ride comfort - particularly over sharp undulations and speed humps. There's also 'Active Trace Control' for reduced understeer and sharper handling - both features borrowed from the brand's larger Qashqai and X-Trail models. A clever brushless electric power steering system - for greater steering feel and response - is also available. And much attention has been paid to reducing noise in the cabin. Nissan has focused on improving noise insulation and optimising the car's aerodynamic performance. Enhanced aero efficiency has been achieved thanks to the combined roof and side spoiler. As a result, this Micra has achieved a Cd of 0.29 - impressive for a supermini of this class. 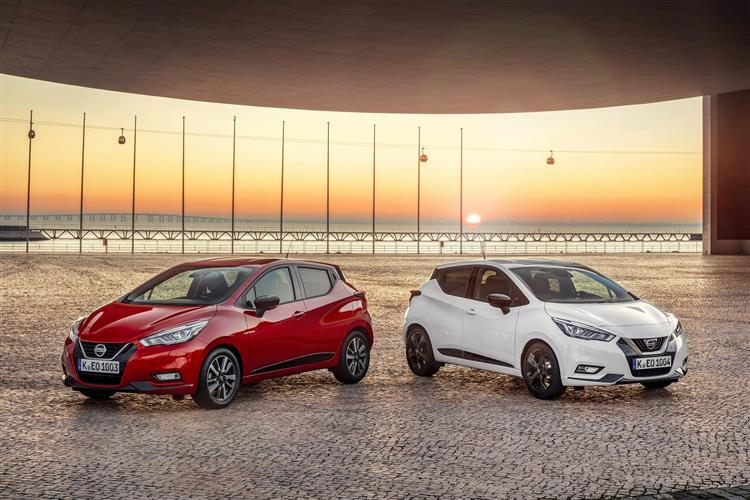