PLUSH IN THE SLUSH (some text hidden)

Here's a Mercedes E-Class Estate you might want to get really muddy. Yes really. Jonathan Crouch checks out the E-Class All-Terrain in its improved E400d form.

With the E-Class All-Terrain, Mercedes has confidently entered the market segment for executive estates with 4WD capability and SUV-style looks. If there is still any social stigma in driving an SUV and you don't like the thought of it, then if you're in the market for a premium-branded load-lugger with light off-piste capability, this could be exactly what you're looking for. Here, we look at the improved E400d version.

Mercedes usually isn't slow to enter new market niches, but there are exceptions to that rule. For example, the brand couldn't offer you a mid-sized SUV until the GLC model was launched in the Spring of 2016. And, for people buying in that car's segment who need light off road capability but don't want an SUV, they'd never - until late 2017 - provided a go-anywhere 4WD estate contender to take on Audi's A6 allroad, a model that's been in production since the turn of the century. The Audi has direct competition now though, in the shape of this car, the E-Class All-Terrain. As with the A6 allroad, the formula here is pretty straightforward. Take an E-Cass Estate, give it a few visual SUV-style aesthetic cues and add in an air suspension system that can lift the ride height and make rutted tracks easily passable. Let's have a closer look at what's on offer from this car in uprated E400d form.

Look closely at what makes this E-Class All-Terrain model different and you begin to understand why it took Mercedes so long to launch an Audi A6 allroad rival. A car of this kind needs air suspension to be able to lift it clear of off road obstacles and it's only been since the launch in 2016 of the tenth generation E-Class model that the Stuttgart brand has had a system sophisticated enough to provide that kind of capability - the 'AIR BODY CONTROL' suspension set-up. It works as part of the 'All-Terrain driving programme' that's an added setting on the usual E-Class 'DYNAMIC SELECT' driving modes programme. Selecting this mode at under 21mph raises the car by 20mm and at the same time, the thresholds for ESP stability control, active yaw control and acceleration skid control are adapted for off road use. There's also a button on the centre console that allows the driver to select three levels of air suspension height, from zero to 35mm above the normal level. And an E-Cass All-Terrain model already rides 29mm higher than a normal E-Class Estate, thanks partly to its larger tyres. Overall, that means the driver of this model can vary total ground clearance between 121 and 156mm, which means that this car can ride higher than most SUVs. As you'd expect, the brand's 4MATIC on-demand 4WD system is standard. There's just one diesel engine choice - the 340hp 3.0-litre inline six cylinder diesel powerplant fitted to the single E400d variant, which powers it to 62mph in just 5.4s and puts out 700Nm of torque. 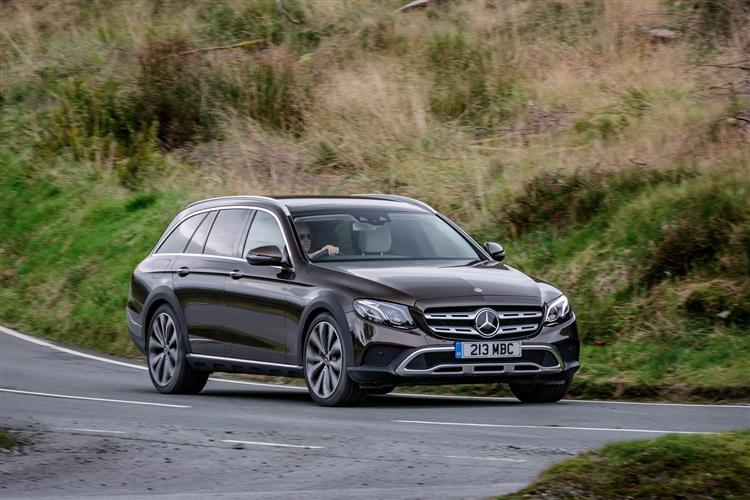