Citroen's SpaceTourer is a super-large People Carrier aimed at families with their own private parking space outside the maternity unit. Jonathan Crouch checks out the latest range.

Thinking of buying a People Carrier with room for up to seven people? Well, what about if, for not much more, you could get yourself a smart-looking one with space for up to nine folk? That's what's on offer from Citroen's appealing-looking SpaceTourer MPV.

Citroen has never been a serious player in the super-large People Carrying MPV market, the segment that sees cars that are essentially converted medium-sized vans, models like Volkswagen's Caravelle and the Mercedes V-Class. The French brand has long offered minibus versions of its Dispatch LCV, but they've never really courted car customers. Now though, the Gallic maker has a model line that very definitively does, the SpaceTourer. It's still based on a van of course: that's necessary if the room required by customers in this segment is to be achieved. But, Citroen tells us, the Space Tourer has very definitely been developed as a car. Or as a proper MPV anyway. It's based on the second generation version of the company's Dispatch LCV and it's the French manufacturer's version of a People Carrier also marketed by Peugeot (as the 'Traveller') and by Toyota (as the 'Proace Verso').

Sensibly, all the Euro6 units engines on offer in the SpaceTourer are diesels and if your needs are mainly based around lighter people carrying duties and short distance urban work, then the entry-level 120hp 1.5-litre BlueHDi unit may well be quite sufficient. For heavier payloads and longer journeys however, you'll be needing the 2.0-litre BlueHDi model which gives you a lot more pulling power and is available with 120, 150 or 180hp. The 120hp unit is optionally available with the brand's efficient EAT8 auto transmission, a gearbox that's mandatory on the 180hp variant. News that this Citroen MPV is based on the marque's Dispatch van may lead you to fear the worst when it comes to handling dynamics. Actually though, you should be pleasantly surprised by the dynamics on offer here, these aided by a variant of the same EMP2 platform used for Citroen's Grand C4 Picasso People Carrier. The ride should particularly impress. Special wishbone filtering is provided to dampen the impacts from our country's terrible tarmac and the variable stiffness springs and shock absorbers should deliver decent levels of comfort whether the vehicle is loaded or unloaded. Refinement is also claimed to be surprisingly good for such a large, square MPV. As before, there's the option of a Grip Control traction system. We also like the 'Coffee Break Alert' warning system, which flashes up a dash warning after two hours of uninterrupted driving at speeds of 40mph and above. 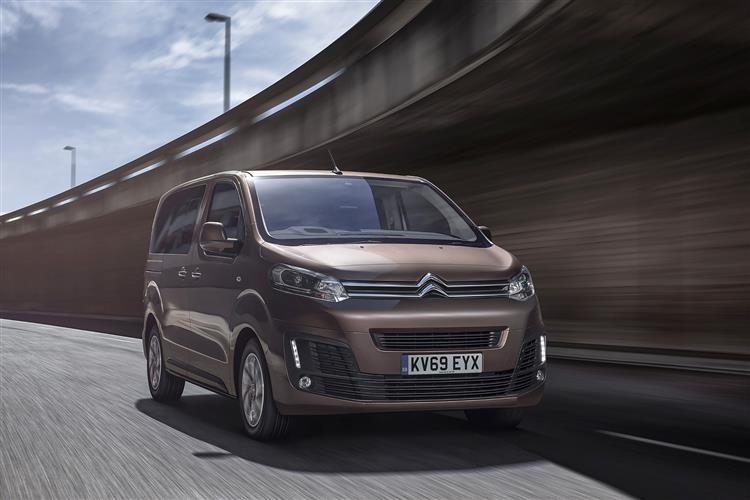