Large, plush SUV motoring is personified by the Lexus RX. Since an original launch back in 1998, it's been finding a select but loyal band of buyers, usually with hybrid power - though this car still doesn't offer the clever Plug-in technology now being used by other rivals in this segment. This revised version is better equipped and can, if you wish, also be ordered in 7-seat RX L guise. Let's check it out.

In an era where other brands trumpet hybrid engines in the luxury SUV segment as if they're the latest thing, Lexus can afford to feel rather smug. Toyota's luxury brand has been selling petrol electric power in its RX model in this market sector since 2005 and has further refined that technology in the improved version of the fourth generation design that we're going to look at here. Surprisingly, the brand has chosen - for the moment at least - not to follow rivals in offering buyers hybrid power with a Plug-in option, but it has that technology at its fingertips for the future. Of course, not every buyer in this part of the market wants a hybrid, but Lexus doesn't agree with the diesel technology that rivals offer. Engines apart, this sharper MK4 model RX looks tempting, though it still won't be the first choice for those prioritising driving dynamics.

Not too many dynamic changes feature here. Apparently the structure of this revised model's slightly stiffer. There are new shock absorbers. And the RX is now equipped with 'Active Cornering Assist' torque vectoring to maximise cornering traction. There are clever new 'BladeScan Adaptive High-beam headlights too. Otherwise, it's as you were. So what's the RX 450h hybrid like? Well you get in, luxuriate in the beautiful leather seats and enjoy the commanding SUV-style driving position before pressing the starter button to be greeted by.. Nothing. The engine's running, true enough. It's just that at this point, it's doing so silently under battery power alone and if you've a gentle right foot, that's all it will continue to use at speeds of up to 30mph before the 3.5-litre V6 petrol engine kicks in, controlled via a six-speed CVT auto gearbox. This mechanical package is much as it was before, with power rated at 308bhp and there's a useful 335Nm of torque for towing. It sounds good too, thanks to a sound generator system that creates a performance-style air intake roar. The E-Four 4WD system's functions have been tuned for sharp response when accelerating through bends. Don't expect too much in terms of off piste ability though. Lexus doesn't think potential buyers will be interested - and they're probably right. Instead, the brand has concentrated on improving the tarmac response of it's the steering and suspension systems in recent years, so as to create a more involving drive. And sure enough, the RX is still one of the most comfortable, refined SUVs in its class. 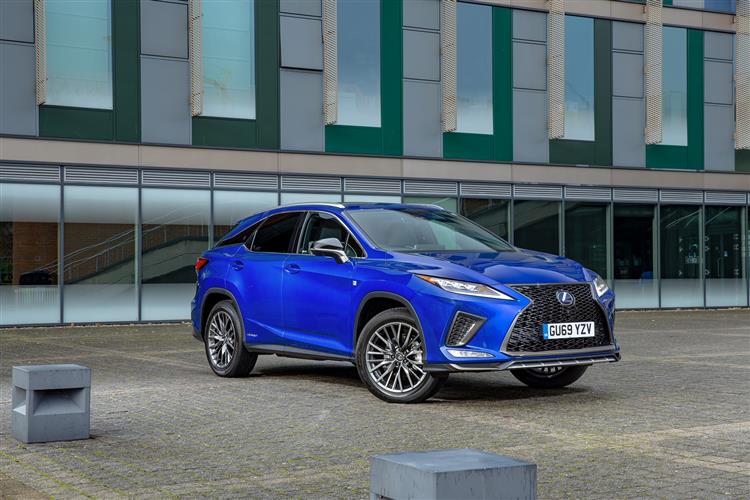