In Alltrack guise, Volkswagen's eighth generation Passat gets re-engineered for off-road duties. Can it excel here too? Jonathan Crouch takes a look at the latest version.

Volkswagen's second generation Passat Alltrack is a family-sized 4x4 estate that continues to strike an appealing balance for many buyers who don't need - and probably don't want - a traditional compact Honda CR-V or Toyota RAV4-style mid-sized SUV. It has the quality look and feel of something premium and much more expensive, blended with an extra dose of subtlety that'll suit potential buyers. Plus it'll be as good off road as you'll need it to be. In other words, it ticks a lot of boxes. Especially in this revised form.

If I wanted to know what a Passat Alltrack owner looked like, I only need to look in a mirror. Mountain bike, skis and karting equipment that needs moving about, middle-aged, has a decent job, maybe fights a little shy of the bling-ier brands. Someone who probably wouldn't previously have been attracted to a Passat Estate. But then, this one isn't quite as we know it. The ride height is a touch higher and the bodywork a touch showier to tweak the lifestyle appeal a small but crucial click towards more outdoorsy hunting, shooting, fishing - heck maybe even jetskiing - folk. People who would usually need to buy a fully fledged SUV, all the while gritting their teeth against a perceived social backlash from eco-friendly neighbours. By equipping this car with 4MOTION all-wheel drive and giving it with a modicum of light off prowess, Volkswagen claims to have ensured that they don't have to. So, it's a plush, family-sized SUV-flavoured 4WD estate. Something we've seen before of course - but not quite like this. Wolfsburg claims to have brought us a car of this kind that bridges the gap between affordable but less premium models of this kind from Skoda and Subaru and the more desirable but much pricier ones from Audi and Volvo. A place you'd think that a significant number of buyers would like to be. Let's try it.

The Alltrack isn't much different to drive than the standard models as only a few changes have been made over the regular Passat. The heightened suspension does have a small effect on handling though, as the centre of gravity is now a little higher. It's a small price to pay though as it stops the underside of the car from being damaged when off road and allows it to go over ground that the regular car couldn't look at. Performance is a fraction down on the regular car but not enough to be noticeable and the Alltrack has more than enough power for most. The Passat Alltrack is only offered in 2.0 TDI 190PS form with a 7-speed DSG auto gearbox and 4MOTION 4WD. The performance is very accessible off road too. This car's Haldex all-wheel drive system uses sensors to detect any loss of grip and transfers power to the wheels with most traction. As well as making off road driving easier, this set-up ensures the driver has optimum traction during more spirited driving or in adverse weather conditions. 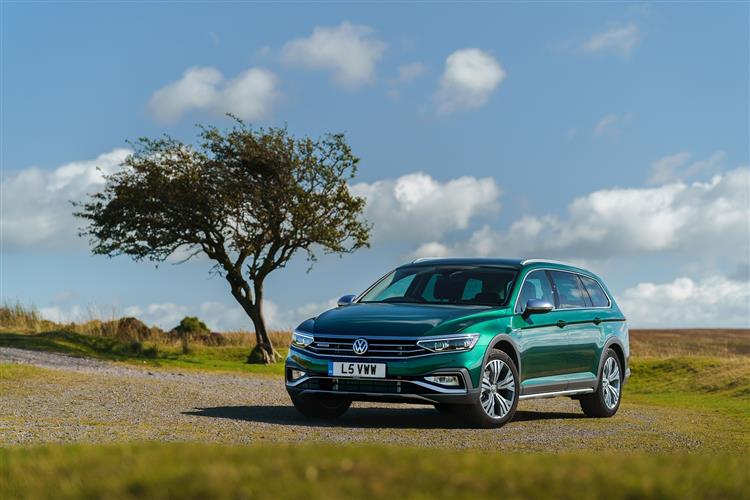