THE BEST 4x4xSTAR? (some text hidden)

The GLC has established Mercedes in the premium part of the mid-sized SUV segment. Now it's been improved. Jonathan Crouch takes a look.

This GLC is a mid-sized SUV, but obviously one with a premium badge. In the Mercedes-Benz SUV hierarchy, it slots in just above the smaller GLA but below the brand's really luxurious and pricey 4x4s - the GLE (aimed at BMW's X5), the big 7-seat GLS and the really hard-core go-absolutely-anywhere G model. The GLC aims to combine the best of all these models and in this enhanced form is smart, efficient and very desirable.

It seems strange to think that until the launch of this GLC model, Mercedes had never offered a proper compact SUV. Or at least it'd never offered one in the UK. On the Continent, the Stuttgart brand has always taken on cars like Audi's Q5 and BMW's X3 with its GLK-Class model, but this was never engineered to be produced in right hand drive. Big mistake. It's taken a long time for the Three-Pointed Star to correct that error, but now that it has, this GLC model can take its place in the company's growing SUV line-up. It gets two frugal diesel engines and, unlike the smaller A-Class-based GLA Crossover, is mainly offered with four wheel drive. In other words, it's a proper SUV model.

Mercedes has worked on making the engine range more powerful and more fuel efficient than before and the mainstream part of the line-up is based around four-cylinder units. In the mainstream range, there are two main diesel options - the 194hp GLC 220d and the 245hp GLC 300d, which get the brand's latest 2.0-litre diesel, replacing the previous 2.1-litre unit. At the top of the line-up sits the fearsome Mercedes-AMG GLC 63 4MATIC+ which uses a 4.0-litre petrol V8 offering either 476hp or 510hp. Every GLC model is equipped with all-wheel drive. The petrol versions now use the Mercedes' EQ 48-volt mild hybrid system. Here, there's an integrated starter/alternator unit that can recover up to 10kW of energy when decelerating, which can then be deployed below 2,500prm to reduce the effort required of the combustion engine. There's also a petrol plug-in variant, the GLC 300e, which has an all-electric NEDC-rated driving range of 29 miles. Mercedes has worked on the suspension too, introducing an updated version of its 'Dynamic Body Control' adaptive damping system which can adjust the rate of control to each of the four wheels. As before, there's also the option of 'AIR BODY CONTROL' air suspension, promising a cosseting ride when you want luxury or flat, sportscar-like handling when you're in a hurry. With an optional 'Off Road Engineering Package', you can even manually adjust ride heights through the infotainment system. For highway use, there are now more semi-autonomous driving assistance systems. Active Distance Assist DISTRONIC and Active Steer Assist provide even more support to help the driver to steer and to keep a safe distance. 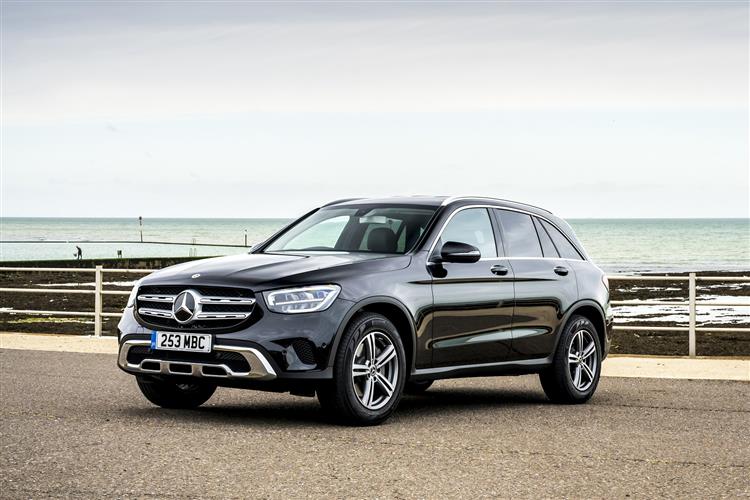