The fourth generation version of Kia's Rio supermini has been rejuvenated. Jonathan Crouch takes a look.

This improved version of the MK4 model Kia Rio now looks an even better alternative to the Corsas and Fiestas of this world, with mild hybrid engine tech, a smarter look and much improved levels of media connectivity. Prices are keen and the seven-year warranty speaks for itself.

For buyers, the supermini category has never been more important. Why? Because modern examples of the breed are now for the first time large enough to function as complete family cars. Take, for example, the model we're looking at here, Kia's fourth generation Rio. It's as big as a turn of the century Astra or Focus from the Family Hatchback segment, the next pricier class up. More importantly, it's the first really top class supermini the Korean brand has ever bought us. It's a progression that anyone familiar with Kia will have been expecting. The first two generations of Rio were quite embarrassing but the MK3 model of 2011 was pretty class-competitive. When the wraps came off this fourth generation version in the autumn of 2016 though, it was clear that it was going to be a bit more than that and this design has been further improved in the updated form we look at here. This is a car that targets nothing less than the top of the segment in terms of the things that really matter to supermini buyers - styling, running costs and everyday practicality. How close it gets is what we're here to find out.

The key news here is the introduction of Kia's 48V MHEV mild hybrid engine technology, an 'EcoDynamics+' set-up which makes an appearance paired with the brand's latest 'Smartstream' 1.0-litre T-GDi petrol engine. The unit comes in both 100 and 120PS forms, with both variants featuring a Drive Mode Select system, giving drivers the choice to customise their drive with 'Eco', 'Sport' and 'Normal' settings. This Rio EcoDynamics+ model is also one of the first models from Kia to be equipped with the brand's latest 'iMT' 'intelligent Manual Transmission' set-up. This uses a 'clutch-by-wire' system that contributes to the MHEV system's greater fuel efficiency and lower CO2 emissions, while retaining the driver engagement of a conventional manual transmission. Other conventional petrol engines are still being offered in this car - including a conventional version of the 1.0 T-Gdi unit in 100PS form, which now gets a 6-speed manual gearbox or the option of Kia's 7-speed 7DCT auto. There's also a new version of Kia's naturally aspirated 1.2-litre pertrol engine, with innovative Dual Port Injection technology and a power output of 84PS. Otherwise, things are much as before. If your experience of the Kia Rio extends back before the launch of this MK4 version, you'll find this current car much more engaging to drive than its predecessors. The stiffer bodyshell helps here, a structure which allowed the development team to introduce a more compliant suspension system, improving the car's compliance and comfort at all speeds, while supposedly facilitating more enjoyable, engaging handling characteristics. A repositioned power steering gearbox has also provided greater feel through the helm too. 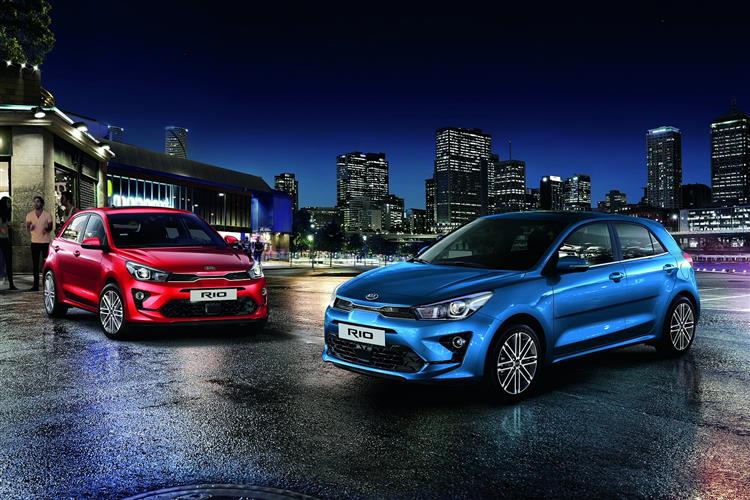