The Mercedes-AMG C 63 gets smarter looks, a digital interor and a new gearbox. Jonathan Crouch presides over the changes made to an old favourite.

The Mercedes-AMG C 63 gets smarter looks, a new 9-speed auto gearbox, even sharper handling and a smarter cabin. But its key selling point hasn't changed: a throaty 4.0-litre V8 that still wields a big stick. Select from 476hp C 63 or 510hp C 63 S states of tune, with in each case a choice of saloon, estate, coupe or cabriolet body styles - and enjoy responsibly.

So - what have we here? A Mercedes C-Class? To some extent, yes. But a very angry one. We're talking twin-turbo V8, tyre-smoking excess and a top speed of potentially up to 180mph. This is the car that sits at the heart of the Mercedes-AMG tuning division's model line-up, an improved version of the fearsomely fast second generation C 63. For driving enthusiasts, a car like this often lies at the end of a long progression of power. Perhaps for you, it started with something like a fast Fiesta. Then, as times got better, you graduated into something a bit nicer - say a Golf GTI - and from there, onwards to even greater hot hatch sophistication - maybe an Audi RS3. Whatever the cars in question, all may have bought you to this point, the pinnacle of the practical performance car tree. A time in your life when somehow, it all seems quite sensible to be driving something not much larger than a Focus that has a 4.0-litre biturbo V8 with up to and around 500hp shoe-horned in up-front. Something like this C 63. This MK2 model, first launched in 2015, still bears that badge, even though the old normally aspirated 6.2-litre V8 its predecessor had has been substantially down-sized, with those twin turbos added as customer compensation. This car's most unique selling point hasn't been lost though, specifically the cachet of sharing its engine with a proper supercar. With the first generation C 63, the V8 in question was lifted from the exotic SLS: here, the potent powerplant is borrowed from the almost equally desirable Mercedes-AMG GT.

We're now well familiar with the Mercedes 4.0-litre V8 twin turbo engine. So familiar in fact that it seems a long time ago that so much fuss was made when it replaced the thirsty old 6.2-litre unit. What we didn't get when the 4.0-litre powerplant was first installed into the C 63 was an appropriately modern auto gearbox to go with it, early versions of this second generation model equipped with a 7-speed auto from the original 2015 launch. So Mercedes has now put that right, mating this V8 with a 9-speed AMG SPEEDSHIFT MCT 9G transmission that according to the brand, delivers an even more agile gearshift response. As before, the engine comes in two states of tune, the standard C 63 offering 476hp and 650Nm of torque and the uprated C 63 S delivering 510hp and 700Nm of pulling power. As ever in any C 63 variant, the performance is startling, the rest to 62mph sprint demolished in just 4.1s in the C 63 (or 4.0s dead in the C 63 S). The top speed is limited to 155mph in the C 63 - or 180mph in the C 63 S. As before, buyers aren't offered the 4MATIC 4WD sytem you get in the lesser V6 C 43 model, so it's rear wheel drive only; which can lead to a few tense moments when cornering in the wet. As always, the typical V8 engine sound remains a key element of the AMG driving experience. The C 63 comes as standard with an AMG exhaust system with a variable flap. The more powerful C 63 S comes with dynamic engine mounts. These resolve the conflicting aims of comfort and dynamic performance by reducing vibrations in the engine/transmission unit. 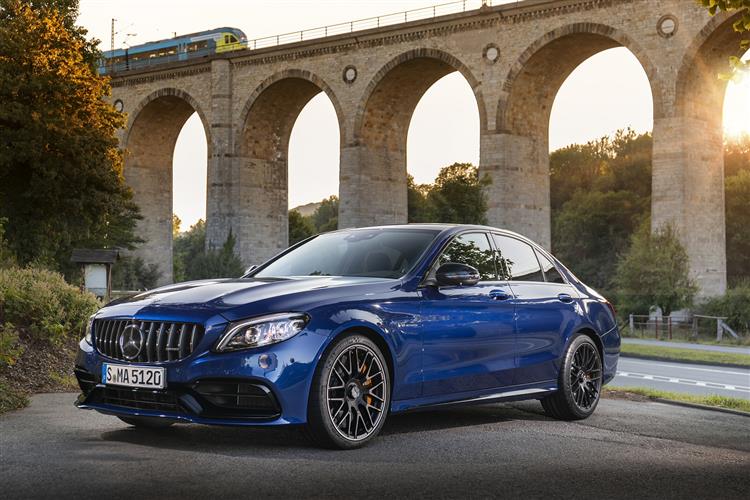