PARTY OUT BACK! (some text hidden)

In MK3 model form, the Renault Twingo has switched from a front-engined front-wheel drive hatch to a rear-engined rear-wheel drive city car. Developed in conjunction with Daimler, Renault's baby aims to give rivals such as the Peugeot 108 and Volkswagen up! something to worry about.

If you were guessing at who Renault partnered up with to make the third-generation Twingo, congratulations if you chose Nissan. It's the logical answer, with Renault owning over 43 per cent of the Japanese company. Unfortunately it's also the wrong answer. Give yourself a clap on the back if you came up with Daimler AG, owners of Mercedes-Benz and, more pertinently, Smart. Yes, this Twingo is built on the chassis of future Smart cars. After realising that both companies seemed to be in the early design stages of very similar concepts, Renault and Daimler signed a strategic cooperation agreement in 2010, marking the official green light for the joint-development of the Twingo and the next versions of the two and four-seat Smart. The first generation Twingo was launched in 1992 and was a huge success in continental Europe although never sold in right-hand drive form here in the UK. We had to wait for the second generation car, which arrived in 2007 and carved itself a profitable niche here, especially in perky Renaultsport 133 guise. The third generation car is the most adventurous yet but will have to beat some serious competition.

The big news with this Twingo is that compared to its predecessor, it's completely back to front. Where that car was a front-engined front-wheel drive platform, much like almost every other city car on sale, this time round there's been a radical change. The engine is now located at the back and drives the rear wheels. Yes, like a Smart car. A pair of 0.9-litre three-cylinder engines have been developed specially for this role. The first is a 70bhp SCe unit with a modest 90Nm of pulling power. It's better if you can to stretch to the turbo TCe unit, which offers 90bhp and has both manual and automatic gearbox options. A 110bhp version of this same TCe engine is available in the Renault Sport-developed GT hot hatch model. The advantages of a rear-mounted engine in a city car are easy to appreciate. Even with a smallish engine up front, turning circles are often compromised by the amount of under-bonnet real estate the front wheels have to move in. With no engine to worry about, you can offer a genuinely tiny 8.65m turning circle. With the wheels at each corner of the car, you're not going to get the sort of weighty, tail-endy feeling you'd get in a 'traditional' rear-engined model where the engine's slung a long way out beyond the rear axle. The Dynamique and GT TCe 90 models are fitted with Variable Gear Ratio power-assisted steering, making the vehicle more agile and reactive at lower speeds. 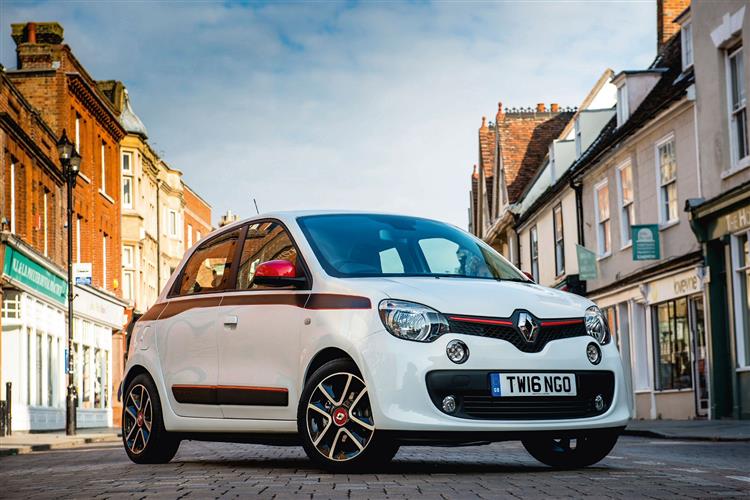