The Citroen C4 Space Tourer brings a much needed injection of style to the compact five-seater MPV market. And does so while delivering practical substance as part of this most French of People Carrying propositions. Especially in BlueHDi 160 diesel form.

It may have been created to go head to head with five-seat MPV rivals such as the Ford C-MAX and the Renault Scenic, but Citroen's C4 Space Tourer, the car once known as the 'C4 Picasso', feels cut from rather different cloth. Emboldened by the success of their boutique DS line of cars, the French brand has decided to inject a measure of style and desirability into many of its other wares and this people-carrying C4 still looks like something that's just driven off a motor show stand. It's a clever piece of product design and speaks to family buyers who need practicality but don't want to sacrifice style. That has usually meant that they buy crossovers or 4x4s but these days, a fresh wave of increasingly high-concept MPVs like this C4 Space Tourer offer a real alternative. Sounds good doesn't it? Let's check out this model in 2.0-litre diesel BlueHDi 160 guise.

Like its Picasso predecessor, this C4 Space Tourer is built on what Citroen calls its EMP2 platform, which has been co-developed with Peugeot and, like the Volkswagen Group's MQB chassis, is designed to be easily customisable to different configurations. Citroen is keen to tell us that this platform helps to reduce kerb weight - which is clearly going to help when it comes to economy and emissions. But does that also mean the C4 Space Tourer is a sprightly handler? Sadly not. There's a fair amount of body roll and there's little in the way this car is set up that gives us too many clues about the inherent talent that's latent in the chassis. Ride quality isn't at all bad, with a slightly taut feel giving it a little more alertness than its predecessor and Citroen has clearly paid a lot of attention to improving refinement at speed. And speed is certainly in evidence in this top diesel BlueHDi 160 model, rest to 62mph occupying 8.9s on the way to 130mph. It only comes with EAT8 auto transmission. 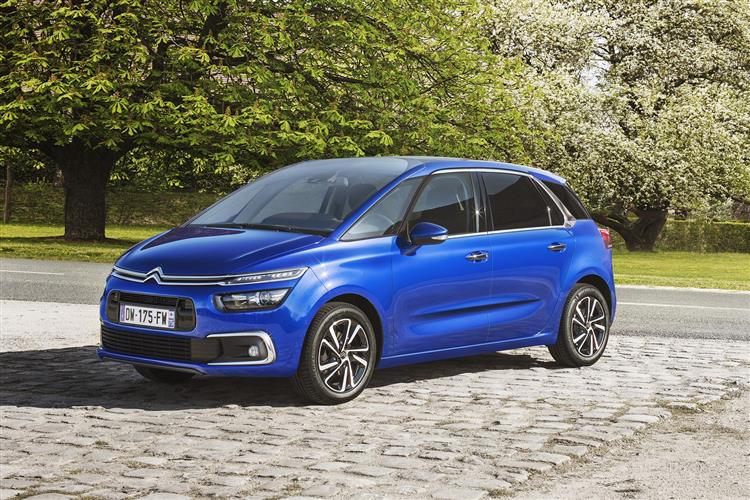