THE GRAND TOUR (some text hidden)

Ford's improved Grand Tourneo Connect is a family-friendly vehicle that won't see you having to pack light. Jonathan Crouch reports

The improved seven-seat Ford Grand Tourneo Connect is a rugged but cleverly-engineered people mover that's sourced from commercial vehicle roots but offers enough sophistication to suit the needs of many growing families. Its especially frugal when equipped with the brand's latest efficient 1.5-litre EcoBlue diesel engines. When used as a five-seater, you get a huge amount of useful luggage space.

The Ford Grand Tourneo Connect is a no-nonsense model based on commercial vehicle roots that offers space for seven and strong value for money. The target customers for this people carrier would be no more likely to comparison shop it against a slick seven-seat Ford Grand C-MAX or S-MAX MPV than they would a Smart Fortwo. Ford has been quick to realise that in offering similarly sized but very different MPVs to different customers, it broadens its market reach quite significantly. Other manufacturers have twigged this as well; Citroen sells Berlingo Multispaces and C4 Picassos for example. Ford really has committed to this sector though and one look at the Grand Tourneo Connect shows why a specialist approach can pay dividends. Here's the usefully revised version.

Ford won't sell you the Grand Tourneo Connect with the 1.0-litre Ecoboost engine as it would probably struggle with the bigger body. This means you get a 1.5-litre EcoBlue diesel engine with a choice of 100 and 125PS power outputs. The former gets a five-speed manual box, the latter a six-speed. There's an 8-speed Powershift automatic option for those who want it. On the move, like any LCV-based product, this one handles better fully loaded, but even when there's no one in the vehicle but you, cornering is predictable. Bodyroll's well controlled too, so roundabouts can be taken at speed without the Connect rolling about alarmingly. The Tourneo Grand Connect isn't the swiftest car in its class, registering a sprint to 62mph time of 13.3s with the 100PS EcoBlue engine, while the 125PS powerplant shaves about a second off this figure. Either way, the top speed is up around the 100mph mark. You get electrically-assisted power steering and a fairly conventional strut front suspension and torsion beam rear. 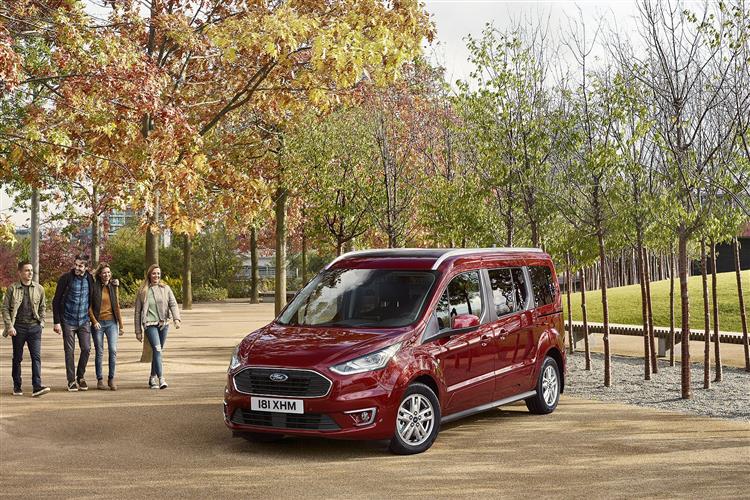