Renault's modern remit is to create more affordable, more sensible vehicles and nothing the company makes sums this up better than its all-electric Kangoo Z.E. 33 van. It costs little more to buy than its diesel-powered stablemate, but from then on, the running cost savings will be huge. This improved version features a new Z.E. 33 battery that has increased operating range by up to 50%, so theoretically, it can go up to 170 miles between charges. For forward-thinking operators, that makes this LCV a very difficult option to ignore in its segment.

The motor vehicle is at a turning point. It simply has to evolve, whether you believe in global warming or not. To emit less in cities. To make less noise. And to use increasingly scarce energy more efficiently. More and more electric cars are answering this call, but their environmental impact is likely to be limited until another class of vehicle properly takes up the challenge. I'm talking of course of vans. When it comes to toxic emissions in our inner cities, LCVs are arguably the biggest culprits, yet van makers have been slow to get on board the electric bandwagon. Renault, in contrast, has led the way - and done it with the model we're going to look at here, the innovative Kangoo Z.E. 33. Originally launched late in 2011, the Kangoo Z.E. was the market's first affordable all-electric van, the 'Z.E' in its name highlighting its ability to produce 'Zero tailpipe Emissions' in everyday use. And though the technology is new, the vehicle it's plumbed into remains the same second generation Kangoo design that's been on sale here since 2007, with levels of space and practicality untroubled by its new electric remit. This is a design that competes in the compact van sector where in all-electric form, it must battle tough rivals like battery-powered versions of the Peugeot Partner and the Citroen Berlingo. To help with that, Renault has introduced a new Z.E. 33 battery into this improved model with a usefully increased driving range. Electric vans are here to stay, but could your business really justify running one? Let's find out.

So what's it going to be like to drive? Pretty quiet is the answer. Press the throttle pedal and you move off in near total silence, so much so that you may find yourself rather startling dozy pedestrians and in need of the optional audio warning system that would alert them to your presence. That might be a useful thing to have for from rest, you'll find yourself coming upon them rather quickly thanks to the fact that 100% of this Kangoo's 226Nm of torque is generated from standstill. Once underway, it is true that, because of the heavy 260kg weight of all those batteries, the power surge does tail off rapidly after 30mph, resulting in a total 0-60mph time of nearly 22s. But if you've an urban-based business, how often are you going to be driving at or near 60mph? Exactly. At more likely delivery speeds, the 44KW electric motor (which puts out the equivalent of 60bhp) feels crisp and remarkably responsive, plus of course, as with all electric models, you've the equivalent of an automatic gearbox, so there are no gear changes to worry about. It's exactly the same mechanical set-up you'll find in Renault's ZOE Z.E electric car. And here, as with that model, there's just one issue that'll dominate your thinking in day-to-day use of this vehicle: that of operating range. Renault says that won't be an issue, quoting research suggesting that 70% of van drivers cover a daily distance of less than 62 miles. On that basis, this Kangoo Z.E's quoted range of 168 miles between re-charge fill-ups (or 124 miles in 'real world' conditions) should be quite sufficient. 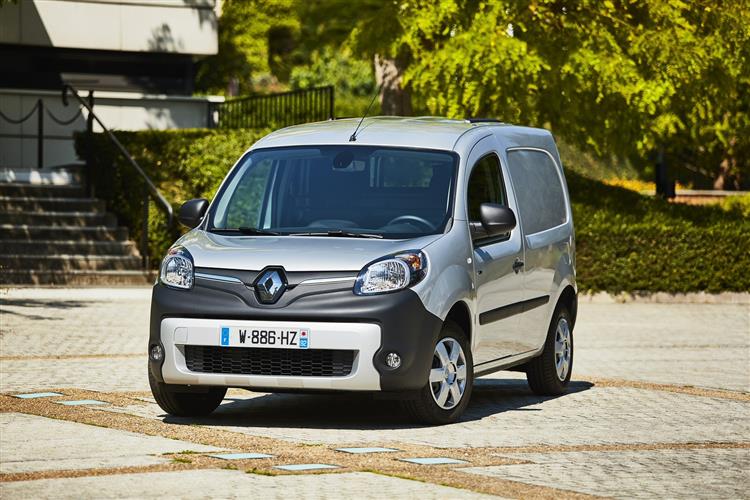