BMW'S GOT YOUR NUMBER (some text hidden)

BMW's 4 Series Coupe has proved to be quite a success story for the Munich marque, accounting for around 25% of sales in the 4 Series model range, a line-up that has shifted over 400,000 units since its original introduction in 2013. Now, there's a significantly revised version of this two-door model.

Now that we're quite used to BMW's 4 Series Coupe, it's a little difficult to remember quite what a stir it caused at its original launch here in 2013. Since then, we've seen further Convertible and four-door 'Gran Coupe' versions of this car, but this Coupe version is arguably the purest interpretation of what still is a very pretty shape. Since this Munich model was first launched, the opposition has considerably upped its game, with new generation versions of both the Mercedes C-Class Coupe and the Audi A5 Coupe both threatening BMW's market share in this segment. Hence the need for this revised two-door 4 Series. So is this something other than simply a different alternative to an A5 or a smarter 'C'? Munich says so. Sleeker and sharp-looking, the aim here is to offer more than just a love letter to performance but instead, the promise of a passionate affair.

Dynamic changes made to this improved model mean stiffer suspension and an upgraded steering set-up. These measures have resulted in a tangible improvement in both lateral and longitudinal handling properties, regardless of the load on board. The upshot is reduced roll, more neutral responses when driving at the limit, even greater straight-line stability and the wonderfully precise steering for which BMW is renowned. This applies to the standard suspension, as well as the M Sport suspension and Adaptive suspension. As ever, the oily bits are, somewhat predictably, shared with the 3 Series, as it would be cost prohibitive to do anything otherwise. The biggest seller continues to be the 190bhp turbocharged 2.0-litre diesel in the 420d variant, with comes with either two or four wheel drive. Above that come the six cylinder diesel models. There are rear wheel drive and xDrive 4WD versions of the 258bhp 430d, before you get to the 435d xDrive diesel range-topper with a hefty 313bhp at its disposal. In the petrol line-up, things kick off with the base four cylinder 184bhp 2.0-litre unit found in the 420i, which is slightly more efficient than it used to be and, as before, comes in rear wheel drive and xDrive 4WD guises. The pokier version of this powerplant these days carries a '430i' badge and has a 252bhp output, with torque rated at 350Nm, making possible a rest to 62mph ime of just 5.9s. That makes it difficult to imagine why you'd want a six cylinder petrol model, but if you still do, there's a 326bhp '440i' variant. Remaining at the top of the range is the twin turbo six cylinder 431bhp M4 super-coupe. 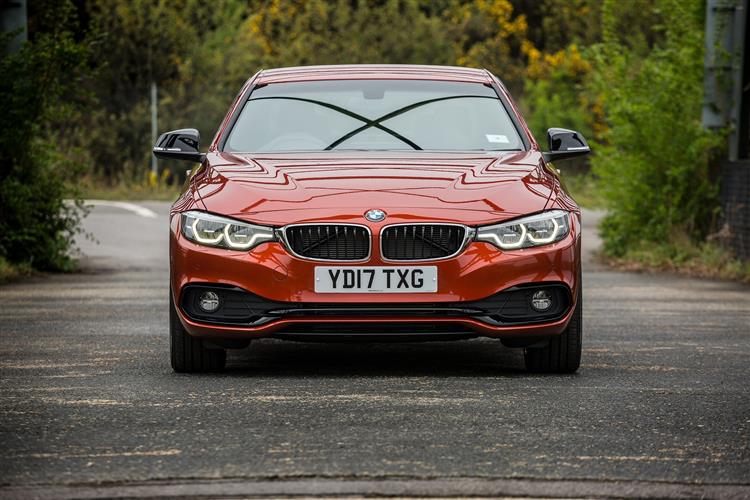