The Mercedes SL is the template for the luxury GT roadster. Once again the Germans show how it's done. Jonathan Crouch checks out the improved V8 SL500 model.

If you want a Mercedes SL, you probably want it with a V8 beneath the bonnet. The mst accessible option in this regard is the SL500 version, lately improved, with power uprated to 455bhp, that grunt marshalled by a freshly-developed 9-speed auto gearbox. There can be few complaints as to the engineering on show here.

This seventh generation SL has seen a rejuvenation of this model line - and it needed just that. The previous version was merely a mild update of its prededessor, so prior to this MK7 model's original launch in 2012, SL fans hadn't seen anything genuinely new for a very long time. This car has certainly delivered that with its light aluminium architecture. And it's perhaps at its most appealing in V8 SL500 guise. After all, the tuned top-of-the-range AMG models require lottery-winning money, while the base SL400 variant is V6-powered: enough said. You can see then, why someone would choose an SL in this form. And enjoy the many changes now made to this revised version.

It would be tempting to think that a car in this class doesn't have to be that good to drive; that it just needs a powerful engine and a modicum of refinement. This is Mercedes though and the depth of engineering verges on the neurotic. For instance, the steering knuckles and spring links on the front axle are also made out of aluminium to reduce the unsprung masses. The same also applies to virtually all the wheel location components on the rear axle. It doesn't stop there. The SL is offered with either semi-active adjustable damping as standard or there's an optional active suspension system ABC (Active Body Control) available as an alternative. Both suspension setups are teamed with an efficient electromechanical Direct-Steer system. Engines? Tick that box. The new 4.7-litre V8 in the SL500 now develops 455bhp, there's 700Nm of torque and you access it all through a freshly-developed 9-speed 9G-TRONIC auto gearbox. Across the range, SL drivers benefit from 'Dynamic Select' adjustable damping, a set-up you can tweak via 'Eco', 'Comfort', 'Sport', 'Sport Plus' and 'Individual' modes to suit the mood you're in and the road you're on. Another option is 'Active Body Control' with a curve tilting function. This reduces body movement through the bends in a way that's almost eerie. Acceleration? Well 62mph is just 4.3 away. Dynamically, this car has always sat rather uneasily somewhere between a Porsche 911 Cabriolet and a BMW 6 Series, not as sharp as the 911, not as luxurious as the Six. With this sixth generation SL, the difference is fundamental. In this, thanks to lighter weight, a wider track and the clever semi-active adaptive damping, we no longer have a car that's neither one thing or the other but one instead, arguably able to offer much of the best of both worlds. 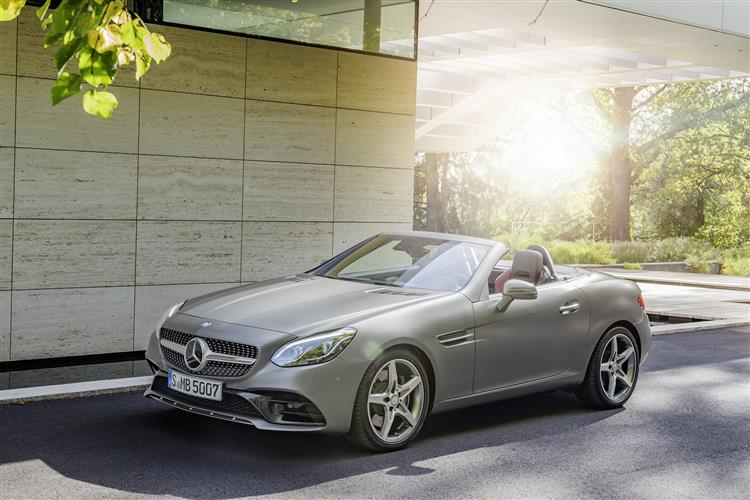