Put your preconceptions to one side and prepare to be impressed by the Fiat Qubo. Jonathan Crouch reports

Small MPVs aren't usually big on excitement and some people could easily fall into stupor at the prospect of a van-based one but Fiat's Qubo deserves a moment of your time. It offers the space and practicality you'd expect from an ex-commercial vehicle but Fiat's stylists have done a grand job of enlivening the exterior. The 1.3-litre diesel engine is somewhat sluggish at the top end but it's punchy at low speeds with top class economy and comfort levels are surprisingly good too.

The back story to the Fiat Qubo is one that might put interested parties off. It used to be a Fiat Fiorino, the company's sub-compact light commercial vehicle. Yes, a van. There will be prospective buyers who won't consider it for that reason alone but those who can overcome their internal snobbery and give the diminutive Fiat a chance on a level playing field are likely to come away surprised. Vans aren't what they used to be and with the 1.3-litre Multijet diesel installed, Fiat's little package of practicality could be just the thing. One of the major challenges for designers asked to conjure up MPV people carriers is to cram as much space and utility as possible within the confines of the vehicle's dimensions. The smaller the vehicle, the tougher it is to accommodate everything and everyone that its owner might ultimately need to. Down the years, a huge amount of pondering must have been done in trendy design studios as to how best to achieve these goals and invariably, the train of thought has hit the buffers at something roughly equivalent in shape to a van. The Fiat Qubo cuts out the middle men, making the step from small commercial vehicle to small MPV courtesy of some added windows, seats and styling enhancements.

You really can't go far wrong with Fiat's 1.3-litre Multijet diesel engine. It's used across the manufacturer's small car range, in its compact vans and in quite a few Vauxhall-badged products as well. Diesel engines don't come much smaller but the 1,368cc four-cylinder unit can still pack a punch, developing 80bhp and 190Nm or torque from 1,750rpm. If straight-line speed is your thing, the Qubo will disappoint as it claws its way up to 62mph in just over 16s and eventually reaches a 97mph top speed but that healthy torque output makes it pleasantly zesty in stop/start scenarios. If that's not enough, there's also a 95bhp version of this unit. On the road, the Qubo is a much more composed proposition than its commercial vehicle origins might suggest to some. The suspension is on the soft side and this, along with the tall shape of the Qubo, does lead to some body roll when it's cornered with vigour but it's not too bad. The plus side of the softly sprung set-up is a comfy ride on all but the lousiest road surfaces. Together with the Qubo's responsive steering and tight turning circle, this makes it a very amenable companion in urban settings. Longer journeys are far from out of the question if you can live with having to work the engine quite hard on occasion. Noise levels in the cabin are pleasantly low and the car will scoot along without drama at motorway speeds. 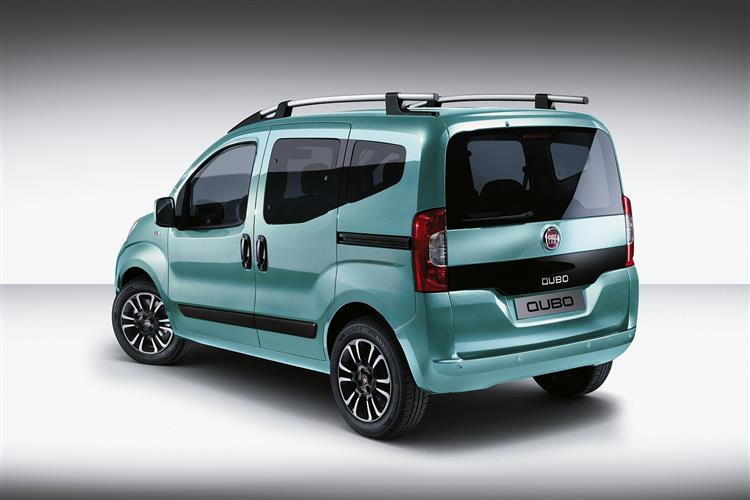