THE MORE IT CHANGES. (some text hidden)

.the more it stays the same? Toyota's Corolla has taken a big step forward. June Neary checks it out

Will It Suit Me?word count: 99

More than any model before it, Toyota's latest Corolla is on a mission to be all things to all people; well most things to a lot of people would be more accurate. It's still the world's most successful automotive model nameplate, dating back to 1966, since when 46 million cars have been produced. In 2007, Toyota unaccountably ditched the Corolla name and brought us instead two generations of their Auris model. But now the Corolla's back with a far stronger proposition than the Auris ever offered. I thought I'd try it in the hybrid form most buyers will choose.

Toyota's family hatchbacks have always been eminently practical propositions. Older Corolla models probably represented the greatest exposition of the car as an example of white goods: unexciting, utterly reliable and representing the classic 'low involvement' buying decision. Basically, it was a vehicle bought by people who had no interest or affection for cars. A glance at the appealing lines of this modern Corolla though, shows that it's cut from a different cloth. Three body styles are available, a Saloon, a 'Touring Sports' estate or the hatchback that I tried. Inside, material quality is impressive, with copious use of piano black and metallic-style surfacing. It's not all about the tinsel either. The cabin's ergonomically sound too, thanks to a reduction in instrument panel height that enhances your forward view and a wider centre console area that gives the cockpit more of a wraparound feel. Plus you also get comfortable seats, good forward visibility and reasonable amounts cabin storage. Further helping with the overall feeling of greater sophistication is the view you get through the much smarter three-spoke leather-stitched wheel - that of a new instrument binnacle that Toyota has chosen to present with a combination of digital and analogue design. Anything it can't tell you will probably be covered off by a 8-inch 'Toyota Touch 2' centre-dash screen that deals with the usual DAB audio, Bluetooth, navigation and online connectivity options. Back seat space isn't overly generous, but adequate by class standards. And there's a reasonable boot that in the 1.8-litre Hybrid model I tried is rated at 361-litres.

The self-charging hybrid proposition with this Corolla is vastly improved over what was provided by its forgettable Auris predecessor. With the 1.8-litre variant I tried - the one most customers will choose - the response to throttle input is slightly more linear than with previous Toyota hybrid models, though the disconnect between the accelerator pedal and the CVT auto gearbox can still be frustrating. The brand has worked hard on this 122hp electrified unit, equipping hatch and estate Corollas that use it with a lithium-ion battery that's smaller, lighter and can deliver more power to assist the engine thanks to improved recuperation capabilities. That helps with fuel economy that on a 1.8 Hybrid hatch can be up to 66mpg on the WLTP-rated combined cycle. That's a fraction less than you'd get with a small rival diesel-powered competitor, but this Corolla's CO2 emissions showing - up to 76g/km for a 1.8 Hybrid hatch on 16-inch wheels - is far better than any comparable black pump-fuelled rival can manage, so your tax payments will be much reduced. Significantly, Toyota has decided that this time round, its family hatch contender must offer a choice of hybrid options, slotting in a 2.0-litre 180hp electrified unit in at the top of the range. Here, the link between accelerator position, revs and actual performance is far better matched and you no longer have to spend so much time with the accelerator rammed against its bump stops when you're running late for wherever it is you've got to be. There is a third Corolla engine option - a conventional 1.2-litre petrol turbo unit with 116hp - but only around 10% of buyers are expected to want it. Whichever powerplant you prefer, my experience suggests that this Toyota is far more dynamically able than its segment predecessors this time round. Throw the car into a corner and you'll find that though this Corolla is no Focus, it far from disgraces itself, with a decent level of front end grip and steering that's predictable and accurate, though rather light.

With prices starting from around the £24,000 mark, the Corolla hybrid isn't cheap but it stacks up reasonably against its diesel competitors. Reliability is virtually assured, and there's always a ready market when it comes to resale time. As with any up-spec car, the plushest versions won't perform as well when it's time to sell on as a cheaper Corolla model, but you'd live with that for all the additional equipment it comes with. 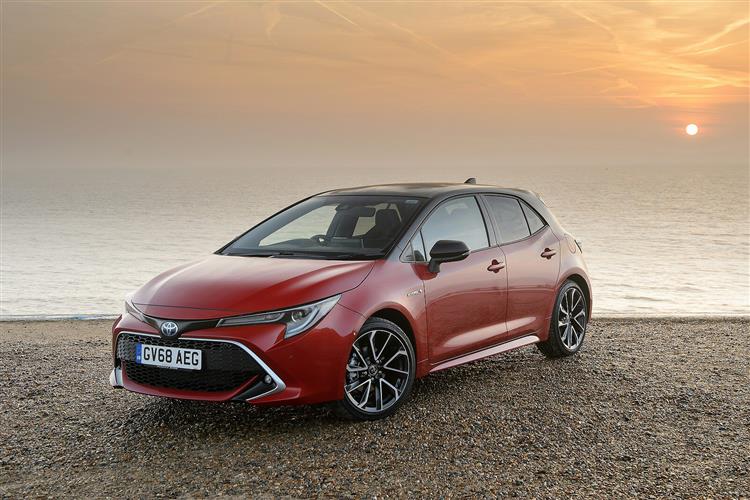