When I was younger, we used to play a game where you could 'predict' your future. You would choose two things you liked and then two you hated; boys, houses, cars, colour of your wedding dress etc. When it came to cars, everyone put the same thing. We all despised three-wheelers and bicycles in favour of limousines (we soon grew out of that!) and ownership of a Mercedes. The Stuttgart brand has cleverly created a glamorous aura around its products. They hold appeal for almost everyone and the E-Class Cabriolet is definitely one of the cars I want to buy when I win the lottery - for the image if nothing else.

If you're looking for something nippy and low key to get you around the town, then this is not your thing. The E-Class Cabriolet is the ideal car if you want to turn heads or make the neighbours jealous. As for it being suitable for the family, it would have to be a small brood. There are two seats in the rear, but if you have two large adults in the front, the amount of legroom in the back becomes negligible. I was also surprised at the small amount of storage space in the rear. There are small bins either side of the rear seats but little else. A big plus point for the interior has to be the seat belt feeders. These little gadgets extend when the engine is switched on, making it easy to reach for your seatbelt. The boot of the E-Class Cabriolet is like Aladdin's cave. What appeared to be a long, yet shallow load area hid a secret compartment, with a useful fold-out shopping crate that's supposed to help on Tesco visits. From inside the car on a dismal day, you can barely notice that the car is a convertible. The soft-top roof needs no manual intervention and can even be operated from the key fob as you approach the vehicle.

The Mercedes E-Class Cabriolet was a driving dream. It oozes with class and style, yet has some innovative safety features that give you complete peace if mind. The Cabriolet is fitted with rollover bars that are activated on impact taking 0.3 seconds to reach full height, to provide enhanced safety for both front and rear passengers. This car is actually very enjoyable to drive. It was a bit grey when I first took it out - I'd had visions of a hot sunny day, with my aviator sunglasses and a white scarf billowing with the speed. Anyway, I put the hood down, a process that occupied 20 seconds and I found could be done at speeds of up to 31mph. On the move, I found that road users treat you differently in this cabrio; my little supermini gets raced at the lights and cut up at junctions, whereas no-one dared mess with the Merc.

A Mercedes car will come with a Mercedes price tag, which unfortunately is one of the major pitfalls. E-Class Cabriolet pricing sits primarily in the £45,000 to £55,000 bracket and all models come with a single sporty 'AMG Line' level of trim, plus, as usual with an E-Class, there's standardised 9G-TRONIC Plus 9-speed automatic transmission. This E-Class Cabriolet uses the same platform and all the same engineering as the E-Class Coupe model which would save you around £4,500. At the entry-point to the E-Class Cabriolet range, there's a choice - for much the same kind of money - between two four cylinder variants, the 194bhp E220d diesel I tried or the 245bhp E300 petrol model. If, like almost all customers, you choose the diesel option, your dealer will offer you the further opportunity to find an extra £1,640 to get your car fitted out with '4MATIC' AWD. At the other end of the range, a budget of around £56,000 gets you this car with six cylinder power, the choice being between the 258bhp E350d diesel and the 333bhp E400 petrol model. Both come complete with the '4MATIC' system. This set-up also features on the flagship Mercedes-AMG E53 variant, which uses a potent 435bhp 3.0-litre petrol in-line six cylinder unit. 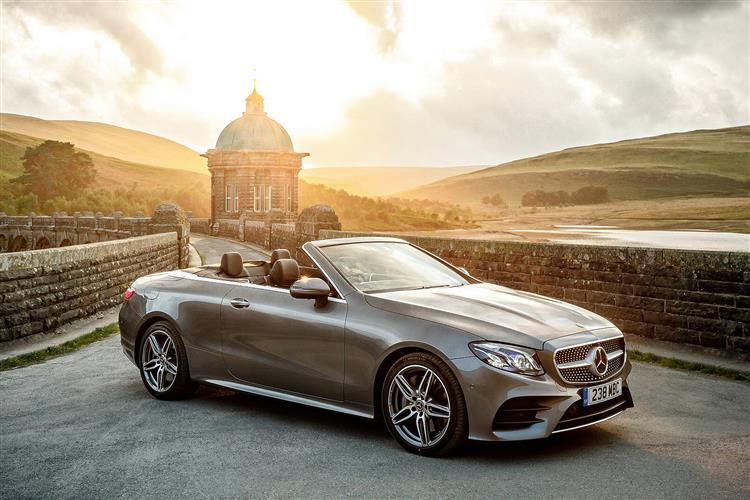