The seventh generation BMW 5-Series is more than a status symbol for company directors and top management. June Neary reports.

You could be forgiven for thinking that the world of the executive car is a rather macho one. All those business high flyers struggling to out do each other with a bigger engine, a more sumptuous cabin or a higher gadget count. It can all appear very unseemly when viewed from afar. There's little doubt that the one-upmanship which creeps into the thinking of so many car buyers is more prevalent when we're talking about these executive expresses thanks to the burning desire to keep up appearances for the benefit of colleagues and rivals but they are just cars - and some of the best cars in the world at that. I took a look at BMW's latest 5 Series to see what it has to offer those who aren't jockeying for position on the greasy corporate pole. The 5 is a big executive car that's bigger than ever in its latest form thanks to a basic chassis that's shared with the even more luxurious 7 Series. Its key rivals need little introduction, partly because this BMW, the Mercedes E-Class, Audi's A6 and, increasingly, the Jaguar XF have the executive car market virtually sewn-up between them. The 5 Series has to get itself selected ahead of these very capable rivals, whether that's by private buyers or, more importantly, by the business people lucky enough to be offered this kind of vehicle as a company car.

It's important to remember that although it's fiercely competitive, the executive car market is quite conservative. Outlandish styling and left-field ideas don't tend to go down very well, as BMW found with the quirky-looking MK5 generation '5' back in 2003. It was a very advanced car that drew criticism for its unorthodox looks and complex menu-driven control systems. Today's seventh generation model is much more conformist with handsome but understated looks and controls that have been finessed to improve usability. You'll need to look quite carefully for the cosmetic updates to this latest version and believe me, that's a good thing. There's a maturity and elegance to this 'G30' generation 5 Series, a certain understatement that speaks of confidence. In profile, the long bonnet and set-back passenger cell are very apparent and work in concert with a very short front overhang to deliver what BMW hopes is a sportier look. From this perspective, you also get a feel for just how large this 'Five' has now become, this MK7 model's 36mm increase in length making it pretty much as big as a 7 Series was a decade or so ago. Once in the cabin, the design approach seems less understated than it is outside - and feels very sophisticated. Virtual dials cosset your eyes through the beautifully tactile three-spoke wheel, while to the right at the top of the centre stack lies a big 10.25-inch colour iDrive screen that welcomes you on first name terms to the 5 Series driving experience. Those may be the first things you'll notice, but shortly after, you'll be struck by the sheer quality on offer here. All the materials used - even those lower down - feel great to touch, with proper leather and metal finishing that feels very special indeed. At the back, my family noticed the extra kneeroom and legroom that come courtesy of this improved model's 7mm of extra wheelbase length. The boot's 10-litres larger too, now 530-litres in size and there are optional split-folding rear backrests you can specify to extend it. Of course, if you're going to be needing this sort of capacity very often, you'll be better off going for the Touring estate version of this model, which offers a 570-litre boot in conventional form, extendable to 1700-litres if you flatten the rear seat.

BMW has a fantastic line-up of different engines with scope to turn the Five into anything from a snarling performance saloon to a super-economical motorway mile muncher. Across the range, the level of fuel economy you get for the performance on offer really is first class. I tried the 520d diesel model and came away hugely impressed with its powerful performance and particularly with the huge swell of torque that hits home early in the rev range. It makes the car feel effortless under normal driving conditions and properly quick if you elect to put your foot down. Engine-wise, most buyers will choose the 190bhp 2.0-litre four cylinder diesel unit fitted to my test car. In its most frugal 'EficientDynamics' guise, this particular 'Five' is capable of running cost returns that are un-bettered in the class - 72.4mpg on the combined cycle and 102g/km of CO2. If you need more pulling power, the 3.0-litre six cylinder diesel of the 265bhp 530d model beckons. Another 3.0-litre six cylinder unit features at the top of the mainstream petrol engine line-up, namely the 340bhp powerplant that sits beneath the bonnet of the potent 540i variant. The primary 5 Series petrol engine though, is a 252bhp 2.0-litre four cylinder unit offered in two distinct forms. You get it conventionally in the 530i model. But it also comes mated to a 95bhp electric motor and a 9.2 kWh lithium-ion battery as part of the Plug-in hybrid package provided by the 'iPerformance' 530e derivative.

On to pricing. Expect to pay somewhere in the £36,000 to £46,000 bracket for mainstream models and the majority of buyers tend to pay a required premium of just over £2,300 to get the Touring estate version, rather this four-door saloon. All variants come only with eight-speed automatic transmission More than the prices, it's the specification where BMW is attempting to get ahead of the competition. Even with base 'SE' spec, you can expect 'Dakota' leather upholstery, full-LED headlights and virtual instrument dials. As for commoner luxury features expected as standard at this price point, well, you get 17-inch alloy wheels on 520d models - or 18-inch rims further up the range. Plus there's two-zone automatic air conditioning, front and rear Park Distance Control sensors, auto headlamps and wipers, ambient lighting, front seat heating and electrical adjustment, an auto-dimming rear view mirror, cruise control, a smart three-spoke Sport leather steering wheel, LED brake lights, chrome tailpipes and Run-flat tyres and a category 1 alarm, plus there's a powered tailgate on the Touring model. 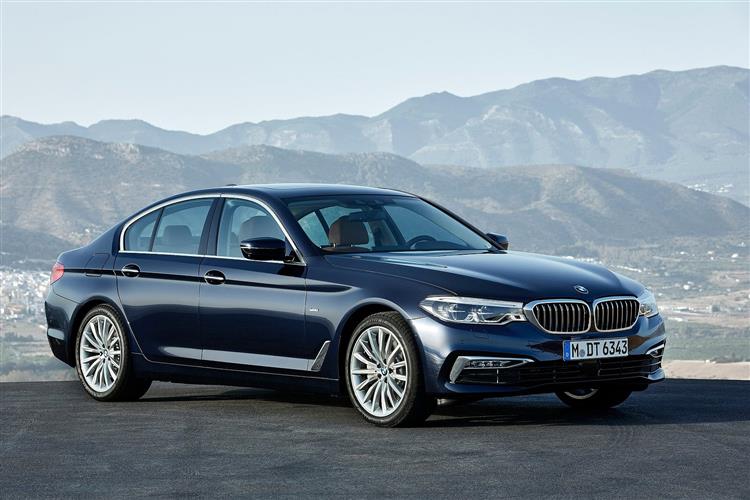