SUV DONE TO A TEE? (some text hidden)

Peugeot isn't a name we associate with large SUVs but the brand wants that to change with this second generation version of their 5008 model. June Neary checks it out

SUVs are very popular these days. Like a badge of honour for stressed out and overworked parents, they're cars designed to make school runs, shopping trips and family holidays that bit more straightforward when you've a cluster of little ones in tow. Considering the SUV's popularity, it's quite surprising that Peugeot has taken so long to offer a decently wide range of them - but that's changed now, this MK2 model 5008 completing this section of the French brand's line-up. At over 4.5 meters long, the 5008 isn't particularly compact but it does have seven seats and the rear ones are big enough to be usable by human beings with the traditional array of limbs. If you usually find large SUVs a little dull, Peugeot's effort might be of even more interest because it's been designed to look more svelte than most of its rivals and drive in a fashion that has more in common with a normal car than a Routemaster bus. I like the cut of Peugeot's jib where this SUV is concerned but I've also lost count of the number of SUVs that have claimed to offer sporty handling and thrusting looks but failed to deliver. Reserving judgement, I'll give the 5008 an initial thumbs up and take a closer look.

From the outside, the 5008 appears to have quite a high window line and that adds to its well proportioned looks but inside, there's still plenty of glass area to let the light in. The seats are mounted quite high in the vehicle, which helps kids sat in the rear maintain a good view out. An even more airy feel can be gained via the full length glass sunroof that was fitted to the test vehicle. In terms of space, the 5008 does very nicely. The front and middle rows are extremely roomy, even for taller adults, and you could even squeeze a couple of grown-ups into the rear rows in an emergency. These back seats are better reserved for smaller children, however. They can be accessed with ease thanks to a clever system where the outer seats in the middle row fold up and slid forward in one movement. Every one of the rear seats folds down separately to create a flat load floor. The total load space ranges from 166-litres with all the seats in use to a vast 2,150-litres with them all folded down. Because the seats fold and move independently, there's huge scope to adjust the cabin's layout. Build quality seems generally good on the 5008 and the layout of the controls is easy to fathom. The high centre console splits the front seats to create a cockpit effect around the driver. There's even a head-up display on high spec models to continue the aeronautical theme.

As expected, this car shares all its powerplants with the shorter but otherwise very similar 3008 SUV it's based upon - so there's a range of BlueHDi diesels and a zesty1.2-litre three cylinder PureTech petrol unit, with the company's 'EAT6' 6-speed auto gearbox widely available as an option on most models. On the subject of auto transmission, you have to have it if you're one of the tiny minority of buyers who'll opt for the older 1.6-litre THP 165bhp turbo petrol engine that the brand has rather unnecessarily included in the line-up further up the range. I was impressed by the base 1.2-litre PureTech unit's balance of power and efficiency - it's capable of up to 55.4mpg on the combined cycle and 117g/km of CO2. Probably the line-up's best all-round choice though, is the most modern of the diesel units, a 1.5-litre 130bhp BlueHDi powerplant. This gives you the frugality of the entry-level 100bhp 1.6-litre BlueHDi unit, but also most of the pulling power of the top 2.0-litre BlueHDi engine I tried, this flagship unit available with either 150 or 180bhp. Unlike its rivals, Peugeot doesn't think the provision of any kind of 4WD system is necessary with mainstream versions of this car, but as an option, it does offer an 'Advanced Grip Control' system that helps you regain traction in slippery conditions. The suspension is tuned for comfort but Peugeot claims that it will still deliver an engaging drive in what is a substantial vehicle. Ease of manoeuvrability is vital in a big family vehicle like the 5008 and Peugeot is offering a series of driver aids to make things easier. Front and rear parking sensors are supplemented by a system that measures roadside parking spaces and gives an indication of whether the 5008 will fit. For something of its size and weight, the car resists body roll well and feels planted on the road. It steers and stops in a way that inspires confidence and only the clunky manual gearbox on our car served as any kind of disappointment.

So, let's get to the pricing, which is pitched mainly in the £25,000 to £35,000 bracket - pretty much what you'd expect to pay these days for the kind of larger mid-sized seven-seat SUV that this 5008 now is. Unlike a lot of its rivals, this model comes solely in seven-seat form; if you only need five seats, you'll be directed by your Peugeot dealer to the smaller 3008 SUV this model is based upon, a Crossover that will come with a £2,000 model-for-model saving over this one. That car, in turn, sits above the supermini-based 2008 SUV that brand would doubtless see as a perfect second family runabout for any 5008 buyer. As with the 3008, the most affordable 5008 variants use Peugeot's impressively efficient three cylinder 1.2-litre PureTech 130bhp turbo petrol unit - and that might be all you really need if your annual mileage is quite low. Around 60% of customers though, are expected to want to pay extra for one of the most affordable BlueHDi diesel variants; there's a 1.6-litre BlueHDi 100 unit offered at a premium of around £1,000 over the petrol powerplant, but we'd be minded to find a little more for the more modern, pokier and efficient 1.5-litre BlueHDi 130 unit that'll move this car along quite a lot more energetically. If you want with these engines, there's the option of Peugeot's 'EAT6' automatic gearbox for an extra £1,400. Across the line-up, there's a choice of four trim levels - 'Active', 'Allure', a 'GT Line' option and the top 'GT' version. Upper spec variants get the option of a 2.0-litre BlueHDi diesel with either 150 or 180bhp. 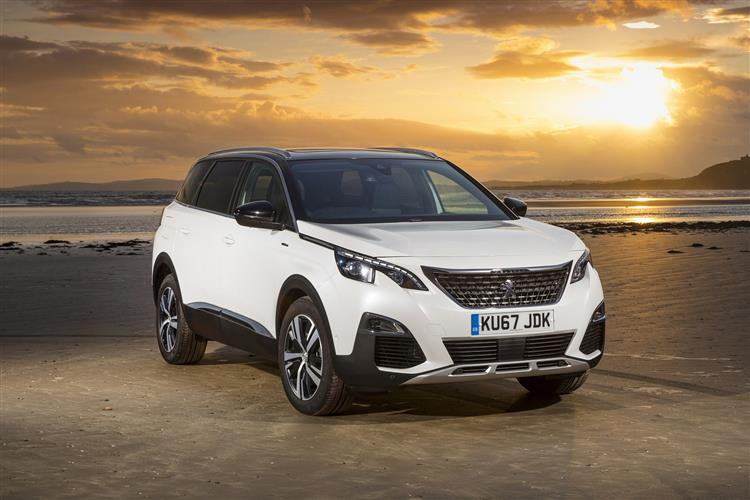