SETTING THE SCENE (some text hidden)

Although a 4x4 would be trendier and a family saloon might be sportier, there's nothing to touch a proper 7-seat MPV for versatility and the ability to cope with the logistical problems that family life has a habit of throwing up. That's why I was eager to get to grips with the latest Renault Grand Scenic. I have a lot of appreciation for the job that these vehicles do and Renault's offering has been one of the leading lights in the sector for a long time. The Grand Scenic is the extended seven-seat version of the standard five-seater Scenic and it gives you the option of either having two child-sized seats in the rear or folding them down to produce a larger luggage area. That's only the tip of the iceberg so far as interior adjustments go, with all the rear seats capable of shifting around so the most can be made of the available space. The exterior of this MK3 model Grand Scenic is a bit more exciting than before but it still didn't really excite me too much: few MPVs do. As usual, the main point of the shape is to maximise the amount of space inside. It's also a very large vehicle, which might prove daunting to some but for me, the size didn't look like anything I couldn't get used to.

Being very nearly the size of an old Espace, which used to be Renault's largest MPV, the Grand Scenic should be big inside and is. The front seats are comfortable, with plenty of room and a good view out. In the second row, three adults can be accommodated without any difficulty and leg room is as generous as that of anything in the mid-sized MPV class. Slide the second row seats forward a touch and it's also possible to seat a couple of six-foot adults in the rear. Their knees will be bunched up a little as the chairs are set close to the floor but it's far from uncomfortable and smaller occupants will have no problem. These third row seats fold into the flat boot floor in a one-touch motion increasing boot space to as much as 718-litres. The middle row of seats can fold and tumble forwards, enabling reasonably dignified access to the third row, or be removed completely to create a massive removal van-like space of well over 2,000-litres. Seat back trays, a deep glovebox and segmented door pockets add to the Grand Scenic's strong practicality score.

You approach a seven-seat MPV measuring over 4.6m from nose to tail with certain expectations about how it will drive but it's worth giving the Grand Scenic the benefit of the doubt. Comfort is the priority and rightly so but Renault has also managed to instil a high degree of poise and manoeuvrability. With its suspension system lifted from the Megane, the Grand Scenic resists cornering roll well and has plenty of grip at the front wheels. The ride quality is first class, the car tiptoeing over poor road surfaces and avoiding wobbliness on sudden undulations. The steering is sometimes too light and the manual gearbox isn't the slickest but in general, and considering the Grand Scenic's family remit, Renault has got the balance just about right. I tried the 1.6-litre dCi 130 diesel model. It had plenty of power, even for moving a Grand Scenic with the family and quite a bit of baggage on board. Refinement was good and although we only sat on the motorways for half an hour or so, it was enough to appreciate that the Grand Scenic would be a very accomplished companion on a long journey. There's also a lower-powered 1.5 dCi diesel with 110PS and the option of clever 'Hybrid Assist' technology. Alternatively, there's a very good turbo 1.2-litre petrol variant with either 115 or 130PS on tap. Despite its size, the Grand Scenic is straightforward to manoeuvre, the process aided by good visibility out of the front. In tight situations on the road, it doesn't feel as large as it actually is and anyone who's ruled out a seven-seat vehicle because they're worried about the awkwardness of its dimensions should give this one a go.

As much as you vow it won't, having kids changes you. It changes your priorities and your viewpoint. It makes you more risk averse too and Renault realises this which is why the Grand Scenic has always scored so well in terms of safety. The Grand Scenic routinely scores maximum five-star ratings from Euro NCAP and this latest car is packed with features designed to avoid collisions and protect occupants should one occur. The car can be specified with automatic headlamps and wipers, cruise control with a speed-limiting function, bi-xenon headlamps that swivel to illuminate round bends and a seat-belt reminder that sounds if a rear-seatbelt is unbuckled. There's also ABS with brake assist and brake force distribution and ESC stability control with CSV understeer control. You get ISOFIX child seat anchor points too. There's the usual premium of around £1,800 to get this Grand Scenic seven-seat bodyshape over the ordinary five-seat Scenic model. That means prices as before, are likely to sit in the £23,500 to £32,500 bracket. Higher-end versions are equipped with Renault's advanced 'R-LINK 2' infotainment system, complete with an 8.7-inch screen. Here, you get voice recognition for the navigation system, telephone use, apps and radio. 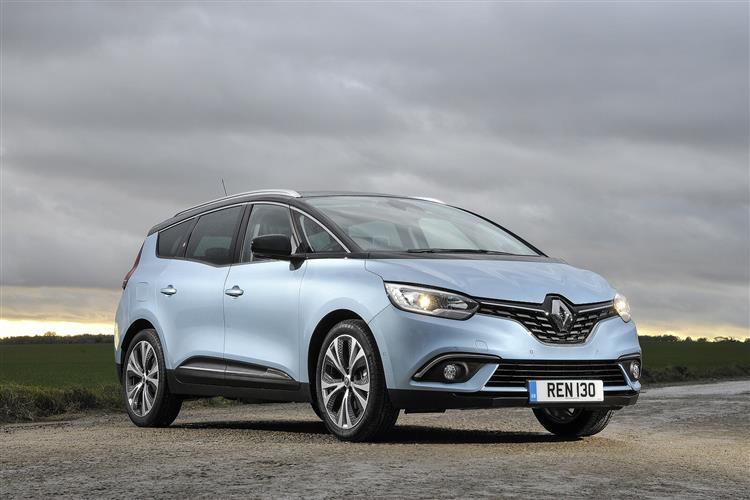