Will It Suit Me?word count: 85

If you want a large People Carrier, then this one just has to be on your list - doesn't it? Ford's Galaxy. This car is now in its fourth generation and is very firmly the sensible-shoes choice in Ford's large MPV line-up. The same engineering is used to create the brand's more stylish but slightly less practical S-MAX model. But the Galaxy is the car you choose if all you really care about is practicality. Feeling in a practical mood, I thought I'd try one.

I should start with the practicalities shouldn't I? There was certainly no problem loading seven of us in the Galaxy. You get 40mm more headroom in the third row this time round and a lot of thought has clearly gone into making the third row of seats more spacious and usable. Passengers there now get their own armrest storage and cup holders. You won't have to wrestle the seats up and down either. They can be raised from the boot floor at the touch of a button and both second and third rows can also be dropped flat from the front by using a console-mounted button. There's an additional 20-litres of stowage beneath the flat boot floor and the door bins are significantly bigger too. And at the wheel? Well, it certainly feels nicer inside this time round, the most noticeable cabin feature being the fascia's big 10-inch digital display that incorporates the excellent SYNC3 infotainment system, there to play its part in reducing button clutter and giving the cabin a cleaner, smarter feel. This set-up's divided into four colour-coded sectors that allow you to control audio, 'phone, climate control and (where fitted) sat nav functions via touchscreen buttons. Heating and ventilation is also covered off by switchgear below the screen, which is just as well since the display buttons can be a little slow and fiddly to use. Instead of stabbing away at these, it's better to try and master the system's impressive voice-activated functionality that allows you to issue simple 'one shot' commands, like 'play song' to play a track from a CD, 'where am I?' to find out where you are or even 'I'm hungry' to bring up a list of local restaurants from the system's built-in Michelin Guide. Directions can then be activated from the split-screen navigation display. Practical touches include overhead space for your sunglasses in a compartment that opens to also reveal one of those useful little extra mirrors that allow you to keep an eye on what the kids are doing in the back. It's just one of a whole range of storage compartments dotted around the cabin into which all those Stickle Bricks, felt pens and Minion sweets can be crammed. All are all useful in terms of size and shape and include a fascia top storage box this time round, as well as a neat pull-out cubby down to the right of the steering wheel and a lidded box at the bottom of the centre console that it's for storage of your 'phone or iPod as it incorporates Aux-in, USB and SD Card points, as well as a 12v socket.

The 150PS 2.0-litre EcoBlue diesel engine in my test car was a revelation to me. There was only the barest hint when I turned on the ignition that the car was a diesel at all. On the motorway the Galaxy soaked up the miles and I was very impressed with its cruising qualities and comfort on long motorway trips. The TDCi diesel also comes in 120PS and 190PS guises and you can specify 4-Wheel Drive if you want it. The petrol option is Ford's 165PS 1.5-litre EcoBoost engine. Self-levelling rear suspension is also available, while the optional 'Continuous Control Damping System' delivers a choice between Comfort, Normal or Sport driving modes. The height of the vehicle means excellent all round vision and the wing mirrors are easily adjusted at the touch of a button. I didn't have problems with the sheer size of the car whilst driving down tight country lanes, either. The glassy all-round visibility helps here.

The 2.0 TDCi 150PS model I tried cost just over £32,000 but Galaxy pricing starts at around the £28,000 mark. There are three main trim levels - Zetec, Titanium and Titanium X. AWD is an option with the 150 and 190PS 2.0 TDCi engines. Those kinds of figures continue to pitch this car directly against two key rivals, SEAT's Alhambra and Volkswagen's Sharan. All Galaxy models now get second-row seat side airbags, in addition to twin front, driver knee, and full-length curtain airbags. Second-row seatbelt pre-tensioners with load limiters enhance rear passenger safety. There are also seatbelt minders for all three rows. My favourite feature? Well it's the MyKey technology you also get included. This helps with safety, allowing owners to programme a key that can inhibit incoming phone calls, restrict top speed, prevent deactivation of driver assistance and safety features, reduce audio system maximum volume and disable the audio system altogether if occupants are not using safety belts. Great if you've teenage kids wanting to borrow the car. Vehicle stability is enhanced with Curve Control and Roll Stability Control systems that adjust engine torque and braking to help drivers maintain control. Pedestrian safety is further enhanced with concealed wipers designed to limit injuries from head impacts. 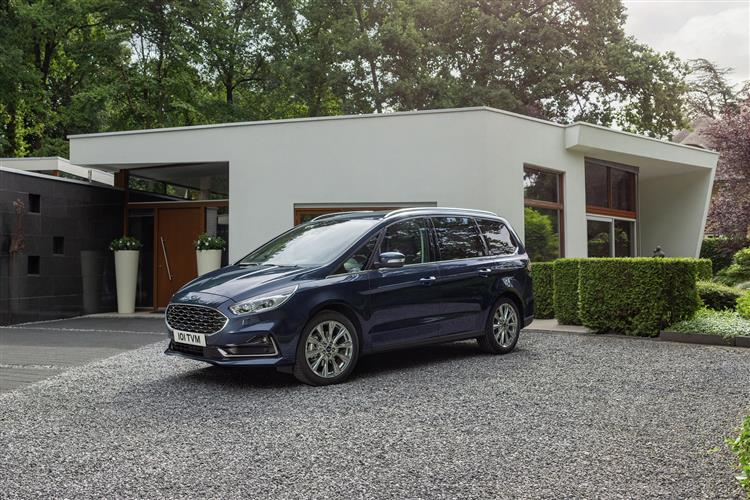