A BOLDER FOLDER (some text hidden)

Fiat's 500 is yet more desirable without a roof. June Neary reports.

I'm a sucker for a convertible car and I have to admit to harbouring a certain soft sport for a cute little citycar as well. When Fiat first announced its 500C back in 2009 therefore, it was all I could do to prevent myself from marching straight down to the local Fiat dealership brandishing my chequebook. Composure regained, it's time to take a look at the latest version of this open-topped Fiat 500 from a more objective point of view. The MINI has been a massive success for BMW, so who can blame Fiat for trying to bag a piece of the action by re-working one of its classic models from the past. When it was clear that the modern-day Fiat 500 had wormed its way into the hearts of buyers with its retro charms, the next logical step was to expand the line-up. The convertible 500C made all kinds of sense. And still does.

The 500C isn't the comprehensive transformation of the 500 into open-topped form that some of us might have hoped for. Fiat has instead fitted something more akin to a full-length fabric sunroof. The sides of the car remain intact with the same arrangement of pillars and window frames as the hardtop. The canvas roof section merely slides back on runners and concertinas up above the boot opening. The advantages of this are that it's simple, low cost and barely impinges on the practicality you get with the standard Fiat 500. The boot and rear passenger space are virtually identical to what you get in a fixed-roof 500. There isn't a whole lot of room for luggage but four people can be accommodated without too much grief and you still get the funky cabin design that made the standard car so popular. The canvas roof has a built-in glass rear window but when it's down and bunched up behind the back seats, it's impossible to see out of this car. Parking sensors are an option but I can't believe that they're not standard as without them, parking manoeuvres in tight urban spots can be very difficult. Make this one option box you don't forget to tick.

The driving experience will be a virtual irrelevance to lots of Fiat 500C buyers. They'll have already fallen in love with the car in a brochure, on a TV ad or upon seeing one in the street. Nevertheless, the car promises to be fairly adept on the road with the same basic set-up as the hard-topped 500, a chassis that's also shared with the Fiat Panda. The engine range opens with a 0.9 litre petrol followed by the 69bhp 1.2-litre petrol but those seeking a little more thrust will step up to the petrol 1.4-litre Abarth versions which have up to 180bhp. The 1.3-litre MultiJet engine is one of the leading small diesels on the market and packs more muscle than its 95bhp might suggest. A choice of transmissions is available, with the 500C getting a five-speed manual gearbox as standard while presenting customers with the option of upgrading to the Dualogic robotised gearbox. Fiat's fuel saving Start&Stop technology is also available. Predictably, the engines powering the diminutive 500C turn in strong fuel economy and emissions figures. The diesel in particular will be a good choice for those looking to keep running costs under control. The Multijet diesel version will average over 80mpg, with the 1.2-litre petrol unit not far behind on around 65mpg.

If you want any kind of convertible car, let alone one with a trendy image, you'll pay top whack for it. That's the real beauty of the 500C because although it looks expensive for a Fiat 500 at nearly £3,000 more than the hard-top car, it's a bargain compared to other convertibles. Prices start at just over £14,000. The roof might be simple but the specification of the 500C looks generous on Fiat's part. The entry-level Pop models get the electrically-operated roof, air-conditioning, remote central locking, a CD stereo with MP3 compatibility, electric door mirrors and seven airbags. That's a lot of kit for a sub £15,000 convertible. Alternative trim levels add features like front fog lights, climate control and rear parking sensors to make manoeuvring in tight spaces even easier. The Lounge version comes in at over £16,000 however, and so looks considerably less affordable than the entry-level cars. 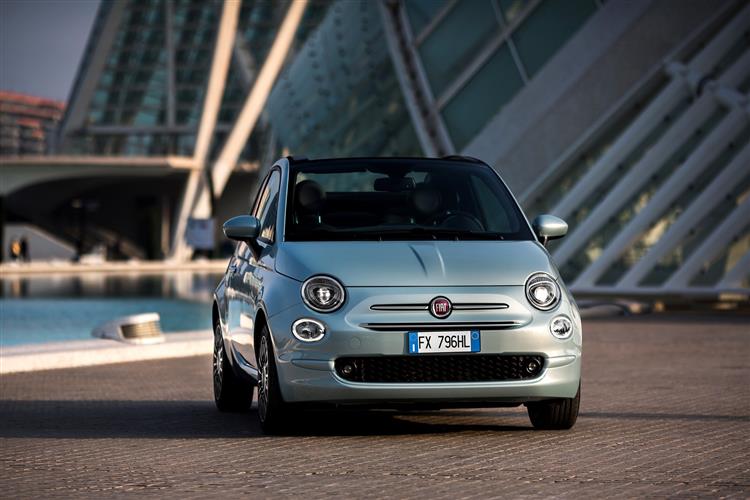