Few thought Mercedes would craft a contender for best car in the world when they introduced the sixth generation SL model but it's a car with a legitimate claim on that crown, especially in this revised form. June Neary reports.

I thought I had this improved sixth generation Mercedes SL all figured out before I even got behind the wheel. I had, after all, driven quite a few versions of its little brother, the SLC roadster. Surely an SL was just going to be an SLC writ large? As such, I was struggling to see the benefits. The SL500 I tried may not have been the fastest variant in the range but at around £83,000, it's still a serious investment. As soon as it rolled up outside the office I could see where the money had gone. As well as being bigger, it's a whole lot sleeker than the SLC. Some of my less informed colleagues couldn't believe that it was a convertible car, so well integrated is the styling. Although it may be a little ostentatious for some, I just knew the Mercedes SL was going to spell fun.

Although practicality is probably not an overriding concern for many buyers of sporty roadsters, the SL is better than many. The hood is the chief reason why. It genuinely doubles up the Mercedes' appeal, offering hushed coupe-style motoring with added security when fixed in place or, at the touch of a button, a sporty al fresco feel. The super-slick mechanism is a magnificent piece if machinery, lowering or raising in just 20s. With the roof in place, there's a respectable level of space available in the SL's boot and the shape is easily accessible. Unfortunately, when you drop the roof that capacity shrinks considerably, something to bear in mind if you set off on a trip with the hood up and the boot stuffed. Unlike many of its rivals, amongst which we'd count the Maserati GranCabrio, the Porsche 911 Convertible and the BMW 6 Series Convertible, the Mercedes SL is a strict two seater, although there is a useful compartment behind the seats that you can throw bags into - something you'd only ever do with the minuscule rear pews of these rivals in any case. Up front there's plenty of room to lounge about if you feel like cruising although the SL500 is never one of those cars that seems to shrink around you. The thought that here is a big, expensive, low-slung car with 455bhp on tap never really fades.

In tandem with its bi-polar coupe/convertible personality, the SL can play the monied boulevardier as well as any of its predecessors, but unlike previous generation models, it can also snap to attention and perform a very convincing impression of a sports car. In this latest guise, the mainstream engines get a bit more power and across the range, SL drivers benefit from 'Dynamic Select' adjustable damping, a set-up you can tweak via 'Eco', 'Comfort', 'Sport', 'Sport Plus' and 'Individual' modes to suit the mood you're in and the road you're on. Another option is 'Active Body Control' with a curve tilting function. This reduces body movement through the bends in a way that's almost eerie. Extensive use of aluminium body panels has kept the weight down and the SL500 rides flat and true through corners. Combined with the ESP stability control system, it gives the Mercedes an uncanny level of security should you really press on hard. Turn the ESP off and I'm reliably informed by my colleagues that the car will happily display its lairy side. If you can overcome the initial unease, the SL is extremely capable and a whole lot of fun. In the past, some sporting Mercedes models seemed, in my experience, to wilfully introduce impediments to the process of enjoyment, either lazy automatic gearboxes, laughably poor manual gearchanges or vague steering via steering wheels that resembled something from the Cutty Sark. It appears the killjoys never got their hands on this SL's design. The sprint to 62mph in this SL500 is completed in around four and a half seconds flat and like all SL models the top speed is limited to 155mph. A specially tuned exhaust gives a fruity rasp at the higher end of the rev range, answering critics who felt that the smooth V8 engine didn't sound charismatic enough for a sports car. With a combined fuel economy figure of 31.4mpg and competitive CO2 emissions of 205g/km, the SL500 looks a reasonable investment, especially when you factor in its bombproof depreciation. An uprated 9-speed 9G-TRONIC auto gearbox is fitted, featuring wheel-mounted shift paddles if you want to switch into manual mode. Below this SL500, there's a 333bhp V6 SL400, while if you have more money to spend, the next SL variant up is the 5.5-litre V8-powered SL63. Above that, there's the V12-powered SL65 AMG.

Taken in context, the Mercedes SL500's price tag of nearly £85,000 isn't as shocking as it may at first appear. Many of its rivals knock on the door of this figure and few feel as well built or offer the versatility and dual purpose capability of the Mercedes. SL prices start at around £75,000. 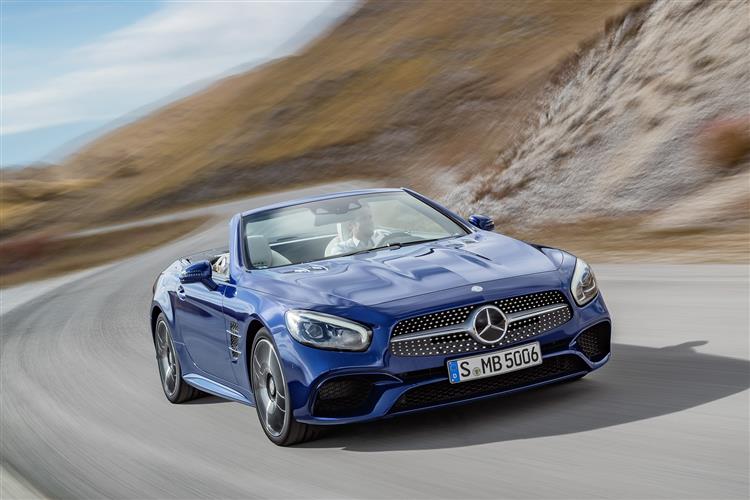