THE ULTIMATE ICON (some text hidden)

Want a luxury SUV? Want the best? Then you want one of these. June Neary checks out the latest Range Rover

If you have to ask 'Why?' or 'How Much?', then you probably shouldn't be considering a new Range Rover in the first place. Yes of course you can buy a luxury 4x4 for less than the £85,000 or so being asked here. And yes of course, it doesn't seem to make much sense paying all that money for off road ability that you'll never use. But that's not the point. This is a status symbol - the ultimate status symbol in fact for country dwellers. And, like everyone else, I'm not averse to having a status symbol parked in my driveway. The sheer bulk of the thing can tend to put you off if you stand too long looking at the thing but from behind the wheel, you really don't notice it. What you do notice are the sales reps scrambling to get out of your way in the fast lane as this British icon bears down upon them. For that if nothing else, the Range Rover makes it onto my wanted list.

The original Range Rover was all about practicalities. You could, after all, wash the inside out with a hosepipe. The idea of doing that to the current version sends shivers up the spine. Today, this is a car whose interior ambience is closer to an Aston Martin than anything else, with quality trim materials tastefully integrated, lustrous pleated leather seats and intelligent use of aluminium and chrome finishing on the dashboard. The effect is tasteful, restrained and isn't going to date as quickly as a more extreme design. I wasn't sure about the styling but most new owners seem to like it. Land Rover reckon it to be essential that people instantly recognise this car as a Range Rover and most will. The exterior is modern yet retains all the distinctive styling cues, as well as introducing some new ones. Longer rear doors and the pricey option of a lengthier body style solve the issue of awkward access to the rear seats that afflicted previous generation models. There's superior refinement too, the development team improving the body structures to reduce harmonic vibration and acoustically laminating both the windscreen and the side glass.

The main difference with this current generation version is the chassis. This Range Rover was the first SUV to rides on an aluminium monocoque structure. In addition to the strong and rigid lightweight body, an aluminium front and rear chassis architecture has been developed with four-corner air suspension. The aim has been to retain the car's luxurious ride while improving the vehicle's handling and agility. The suspension architecture has been designed to deliver flatter, more confident cornering with a natural and intuitive steering feel. The engine range includes a supercharged V8 petrol engine as well as SDV6 and SDV8 diesel powerplants. The SDV8 produces 339bhp and more torque than the petrol option, a straight-six mild hybrid P400 variant. There's also now a P400e plug-in hybrid petrol/electric model, which offers 404hp. Where the top 5.0-litre petrol gets a six-speed automatic gearbox, the SDV8 has an eight-speed unit specially optimised to make the most of all that torque. It does without a traditional gear lever with a rotary dial fitted in its place and wheel-mounted paddle shifters as standard. For off road use, there's an improved version of Land Rover's Terrain Response system, which allows drivers to rotate a dial to choose from setting such as mud ruts, sand and snow. Terrain Response 2 analyses the driving conditions and automatically selects the most suitable vehicle settings for the terrain.

Pricing pitches this car in the £85,000 to £180,000 bracket, making it one of the priciest luxury SUVs you can buy. Is that good value? Well, it depends on how you define value for money. Yes, you can spend less and get a large, plush off roader that does much the same job. But it wouldn't have the same ride or refinement, it wouldn't have the same on-road presence, it wouldn't have the same off road ability. In short, it wouldn't be a Range Rover. All variants are as well equipped as you'd have a right to expect for the sums being asked, with things like cruise and climate control, nine airbags (including one for the driver's knee), an HDD satelite navigation system, leather trim with a heated leather steering wheel, a rear parking view camera, an electric sunroof, a heated windscreen, auto-dimming mirrors, rain-sensing wipers and 19-inch alloy wheels. Clever features include adaptive radar cruise control that works with the 'Forward Alert' and Emergency Brake Assist functions to offer great motorway driving peace of mind also enhanced by a blind spot monitoring system that helps prevent you changing lane dangerously in front of close-following traffic. There's also a superb Surround Camera System that uses no fewer than five cameras to somehow provide a 360-degree 'helicopter view' on the 7" touch screen in the middle of the dash for close manoevring at up to 11mph, with options for selecting and zooming in, to assist with close-quarter parking and with towing. There's even a towing stability system that can detect trailer sway and correct it with opposite wheel braking. 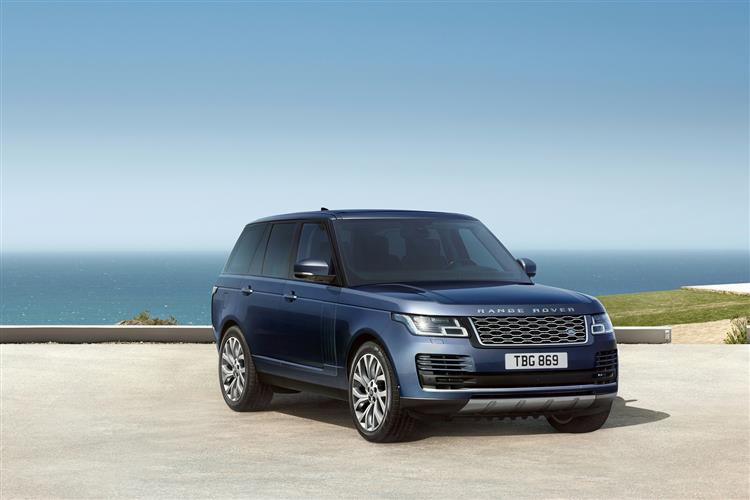