THE SOLIHULL OPEN (some text hidden)

Launched in 2016, the Range Rover Evoque Convertible blazed a fresh trail as the first open-top compact SUV on the market. It was a divisive concept and a pricey package, but it proved successful in allowing Land Rover to tempt buyers from more conventional cabrios. If you're not convinced by the thinking behind this car, you might ask why anyone would want one and in answering, we could talk of the unique looks, the stylish image and the promise of the kind of impressive off road ability that no other open-topped car can match. It might be easier though, to ask a simple question of our own: why not? Let's check it out as a used buy.

If you think you've seen everything in this industry, then you probably haven't. We've had MPV coupes, Crossover estates and hybrid electric super cars. Why not an SUV cabrio too? That's what's on offer here in the form of this Range Rover Evoque Convertible. There have of course been quite a few Land Rovers with soft tops. Go back to the Series 1 model of 1948 and the only way you could have it was with a canvas roof - but of course that's not quite the same thing. It's probably more pertinent to point out that prior to the launch of this car in the Spring of 2016, there had never been a Range Rover with a convertible bodystyle, apart from a few ill-conceived after-market conversions. The concept behind it is as polarising as Donald Trump, something you'll either absolutely love or completely fail to see the point of. What's not up for debate is the thoroughness of the engineering on offer here. This Convertible model retains all the off road ability of its fixed top stablemates, can comfortably seat four adults and offers a five layer folding fabric hood that can seal out anything the weather can throw at it. In concept, this car may be answering a question that previously no one was asking, but then all successful innovation starts that way. No one was asking for an SUV that could scale Snowdon then take you to the opera before the Range Rover first provided it in 1970. And no one was asking for a compact 4x4 with the cutting edge style of a sportscar before the Evoque first delivered it in 2011. With the Evoque Convertible, Land Rover moved the game on again, but this was perhaps a niche too far. It sold until 2019, when an all-new MK2 Evoque model range arrived, not including a Convertible variant.

What You Getword count: 479

Translating a concept car into a production reality can be fraught with pitfalls and problems - which is why it took Land Rover four years to get this model into the showrooms, following its initial showing at the Paris Motor Show in 2012. You can imagine the head-scratching that must have gone on amongst the engineers. For a start, there would have been the usual issue that affects any cabrio design, that of maintaining torsional rigidity without a roof, a crucial consideration here given the need to retain in this variant the Evoque's trademark sharp handling. On top of that, convertible models aren't usually designed to pitch themselves at extreme angles, yet to maintain a Land Rover's standard of off road prowess, this one needed to be able to tilt to up to 35-degrees, without upsetting the kind of electronic roll-over protection system that any modern open-topped car these days has to have. It's all been achieved though, thanks primarily to a very strong base structure that uses higher-strength steel in the door sills, added chassis bracings and larger-diameter anti-roll bars. Whatever the position of its top, the car has quite a purposeful stance that's embellished by nearly all the things that set any ordinary Evoque apart as a piece of pavement sculpture. Overall, it's a shape that works anywhere - on paper, in the showroom, on the Kings Road: wherever. Inside, you'll find that the at-the-wheel experience is very much as it would be in any other Evoque. Well, in any other very plush Evoque anyway. Befitting their premium status in the line-up, Convertible models come as standard with luxurious 'Oxford' ebony leather upholstery, electrically-adjustable heated seats and top touches like illuminated tread plates and 'Configurable Mood Lighting'. The other key difference over an ordinary Evoque relates to the infotainment system, the 8-inch 'InControl' centre-dash touchscreen you'd normally get replaced here by a wider, more sophisticated-looking standard-fit 10.2-inch 'InControl Touch Pro' set-up. And in the back? Well on the plus side, there's more head, shoulder and legroom than you'd get from a comparably-priced executive cabrio. Which would make it very comfortable in the back were it not for the fact that to accommodate the rear roof compartment, Land Rover had to position the backrests at quite a vertical angle. Go for a car whose original owner paid extra for the optional 'Ski Hatch' and you get a centre armrest. And the boot? Well we'd originally hoped that, in proper Range Rover style, this car would feature a fold-down boot lid you could sit on. Instead, there's the mild inconvenience of a lift-up one, though it can be operated by gesture control if you get a plush variant. Inside, instead of the 420-litre luggage area you'd get in an Evoque Coupe, capacity is limited to 251-litres. Still, at least the capacity doesn't alter with the position of the roof. 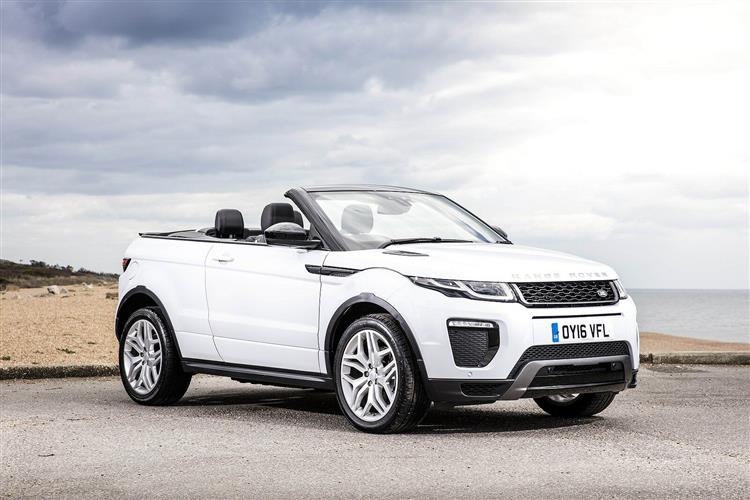