Land Rover reckons that this Discovery Sport is the most versatile premium mid-sized SUV from its era - and it's a credible claim. This is, after all, the only prestigiously-badged car in this segment from the 2014-2018 period that can seat seven. It's also smart, practical, safe - and rugged enough to go a lot further than its rivals off the beaten track. In short, for the used car buyer seeking an SUV in this class from this period, there's nothing else quite like it.

Think of Land Rover's product line-up and you have to think in terms of three things: 'Luxury', as defined by the various Range Rover models. The 'Dual Purpose' practical role typified by the tough Defender range. And the 'Leisure' emphasis of the Discovery line-up, one that starts right here with this car, the Discovery Sport. Yes, this is Land Rover's representative in the important mid-sized SUV segment but when this model was first introduced back in 2014, it was far more than simply a direct replacement for the Freelander models that previously filled that role. The Freelander was a model that sat uncertainly between mainstream RAV4 and CR-V-style soft roaders in this class and the more premium-badged models typified by contenders like BMW's X3 and Audi's Q5. As a far more up market-looking thing, this Discovery Sport from the very beginning firmly positioned itself amongst with the pricier players. It was certainly stylish enough to do so - though stylishly practical rather than stylishly fashionable. The difference is important, for this car was carefully designed to appeal to a different, more family-orientated set of buyers than those targeted by the Solihull company's similarly sized and priced but much trendier Range Rover Evoque. Further setting these two models apart is the Discovery Sport's other key attribute - and the major selling point it offers over its smaller predecessor: namely its ability to seat seven. So you've got the idea. This car's different from a Freelander, different from an Evoque and, according to Land Rover at least, different from the competition too. That seven-seat configuration was, after all, a first in the premium part of the SUV sector. Nor, before 2014, had this segment ever had a contender that could actually seriously pull its weight off road. Add in quality, technology and the usual unrivalled brand equity and it wasn't any surprise that the Discovery Sport sold so well. It was originally launched with the Ford-derived SD4 engines from the old Freelander, but within a year of production, these had been switched in favour of Land Rover's fresh range of more efficient 'Ingenium' 2.0-litre petrol and diesel units. Those were eventually updated in mid-2019 by Ingenium engines featuring mild hybrid technology, these introduced as part of this model's mid-term update. The kind of Discovery Sport you're most likely to find on the used market though, will be a 2015-2018-era straightforward Ingenium-engined version, so that's what we're going to concentrate on here.

What You Getword count: 485

Prior to this model's arrival, family SUVs with space for three rows of seats looked boxy and boring. The Discovery Sport is different, disguising its size really well. The smart front end helps here, with sleek, wraparound corners that reduce the visual bulk of the front overhang and are embellished by careful little touches of design. Up-front in the so-called 'Sports Command Driving Position', you'll find yourself in a pleasant perch from which you realise just how far the designers of this car have come since they created the Freelander. The big buttons and utilitarian plastic surfaces of that car are here replaced by soft touch rotary controls and tactile buttons set in gloss-black surrounds. The key cabin feature though, lies in the centre of the dash. Back in 2014, the 8-inch infotainment screen offered here was state-of-the-art and sure enough, this touchscreen monitor is clear, easy to navigate around and very informative. If you're minded to move rearwards and experience this car from a passenger perspective, you'll find the second row experience enhanced by the way that this middle row's so-called 'stadium' seating is slightly raised by 50mm, giving occupants the kind of very good view out they always appreciated in the old Freelander. Back here, you really appreciate the extra 80mm of wheelbase this car enjoys over its Range Rover Evoque stablemate, something further aided by neat cut-outs in the backs of the front seats that free up more space for your knees. If you need more, then the seat base can be slid back and forwards by up to 160mm to create as much as 112mm of knee room and 1,011mm of leg room - which could make this rear seat almost as accommodating as that in a Range Rover. You won't want to be pushing this second row bench back though, if you've passengers above pre-school age sat behind you in the fold-out third row. Land Rover calls this car a '5+2'-seater, which probably clues you into the fact that these extra pews are for occasional child use only. What about luggage space? Any vehicle that bills itself as being in any way 'compact', yet which claims to offer space for seven people would, you'd think, surely be compromised here. In the event, the issues aren't insurmountable, mainly because of the key engineering feature that under the skin, sets the Discovery Sport apart from its Range Rover Evoque showroom stablemate. Though the two cars share the same front end structure, this car's unique from the B-pillar backwards, is 80mm longer and gets its own very compact multi-link rear axle which frees up space for the fold-out third row seating and ensures that the rear suspension turrets make minimal intrusion into the luggage area. As a result, there's a class-competitive capacity of around 500-litres measured up to tonneau cover-level - or as much as 829-litres if you load up to the roof. 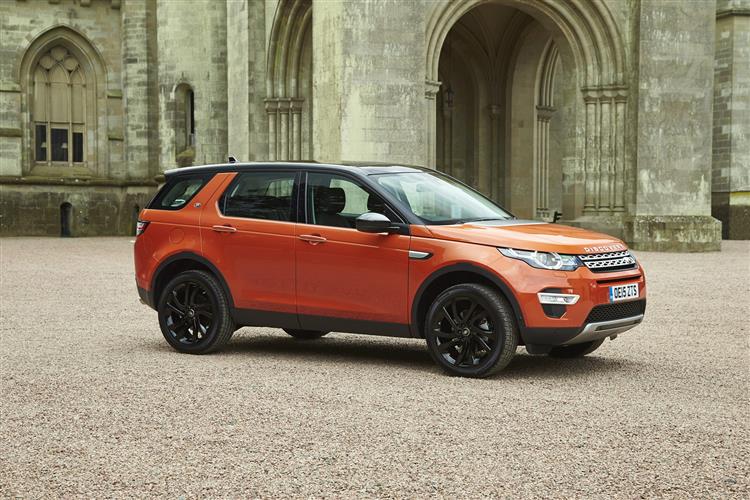