FOUR TO THE FRONT (some text hidden)

Back in 2015, Audi's A4 needed to up its game in the face of tough competition from BMW's 3 Series, Mercedes' C-Class and the Jaguar XE in the image-conscious mid-sized executive sector. In fifth generation B9-series form, it did. The styling of this MK5 model may be evolutionary but underneath are serious revisions that challenged rivals harder than ever. Let's check out the original version of this model as a used buy.

Can 12 million customers be wrong? By 2015, that's how many people had bought Audi's A4 and its predecessor Audi 80 model over the last four decades. This mid-sized executive segment contender is the car that's played the biggest part in making the Ingolstadt brand the success story it is, the A4 these days accounting for over a fifth of the company's total output. All of which means that this fifth generation B9 version had to be very good indeed. Contrary to the impression offered up by its appearance, this was actually one of those rare things, a genuinely new car. Over 90% of it was completely re-designed, while the rest was fine-tuned and the result in 2015 was a package of far-reaching improvements. Many of these were made possible by the headline change, the adoption of a lighter, stiffer and cleverer 'MLB Evo' chassis that made the most significant contribution to the massive 120kg weight saving this model enjoyed over its B8 predecessor. That made this car up to 21% more economical than it was before and Audi promised that it would also make the A4 faster and sharper to drive too. Certainly the A4 needed to improve its dynamic repertoire. It was (and is) after all, the only remaining volume compact-to-mid-sized executive model without an enthusiast-orientated rear wheel drive set-up, so must provide driving satisfaction in other ways. The freshly-developed five-link front and rear suspension set-up ought to help here, with its optional adaptive damping. So will the rejuvenated engine range which offers revolutionary combustion technology to TFSI petrol buyers. Plus there's plenty of hi-tech cleverness fitted to plusher models; quattro 4WD, sophisticated Matrix headlamps that think for themselves and an Adaptive Cruise Control system that at low speeds will even drive the car for you. Add in segment-leading connectivity and, as ever, the classiest cabin in the sector and you've potentially a very strong proposition indeed. In its original form, the B9-series A4 sold until mid-2019, when it was substantially updated. It's the pre-facelift B9 models we're going to check out for used buyers here.

What You Getword count: 373

Audi believes firmly in evolution rather than revolution and if proof of that were needed, then this fifth generation B9-series A4 provides it. The lines are sharper than those of the old B8, the stance lower and the shape a little bolder but the changes are all very subtle, in line with the need to protect the values of previous models. As ever, there's the option of an Avant estate bodystyle as an alternative to the saloon and both variants seized the opportunity offered by this MK5 model's new MLB Evo platform to offer buyers a slightly larger car than before. As ever though with an Audi, it's the interior that'll really sell you this car. The Ingolstadt brand isn't as far ahead of its rivals as it used to be in this regard but this remains the defining cabin in its class from this period, with surprising headroom, a wraparound design and a premium feeling of space and safety. The optional 'Virtual Cockpit' that many original buyers chose replaces the entire instrument binnacle with a 12.3-inch LCD colour monitor and has a layout that's fully digital and customisable, with smart 3D graphics and highly detailed effects. Anything this set-up can't tell you will almost certainly be covered by the slimline MMI infotainment display that dominates the top of the dashboard. It's 7-inches in size on standard models - or 8.3-inches if you get a car whose original owner opted for the top 'MMI Navigation Plus with MMI touch' system, with its crisp 3D maps and responsive Nvidia graphics. In the rear, you ought to notice the benefit of the extra 12mm of wheelbase length this fifth generation model enjoys over its predecessor. Audi says there's 23mm more legroom in the back than there was before but to be frank, it doesn't feel that much bigger. And out back? Well despite this MK5 A4 model's longer length, boot space is identical to that provided before. That means you get the same 480-litre capacity also provided by BMW 3 Series and Mercedes C-Class rivals. If you need more, there's the versatility of a 40:20:40 split-folding rear backrest, the centre part of which is very useful if you need to carry longer items like skis. 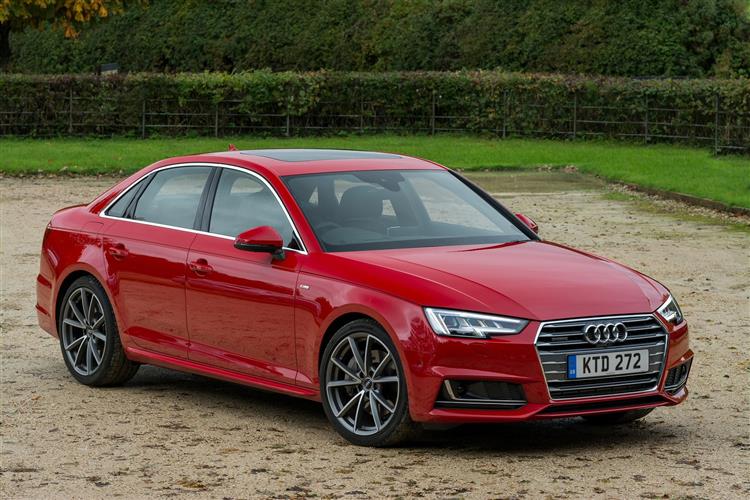