In MK2 model 'Type 4S' form, Audi's R8 got sharper, smarter and faster. Turning away from the tide towards turbocharging, it uses an aurally magnificent normally aspirated 5.2-litre V10 and promises race-bred but road-ready four wheel drive performance able to justify its new-found junior supercar status. Buyers in search of this kind of car must take this one very seriously indeed. Let's check out the pre-facelift version as a used buy.

They say that success breeds success, but the reality is that it breeds expectation. Such was Audi's problem with the this car. Back in 2006, the brand commemorated victory in the Le Mans 24-hours race by launching its very first supercar, the R8, and it surpassed almost everybody's expectations. This second generation version, launched in the middle of 2015, had to build on that car's legacy. Quite a task. The original R8, you see, succeeded in nailing the super-sportscar brief first time out. It was the first contender in years to properly scare the benchmark player in this segment, Porsche's 911, something that models from BMW, Mercedes, Jaguar and Aston Martin had been trying to do for decades. With this second generation version though, the brief was rather different, even though in terms of exterior execution it may appear much the same. Where the original R8 aspired to supercar status, this MK2 model's power and pricing boldly claimed to have attained it. Why the change? Well for one thing, Audi realised by 2015 that buyers would pay exalted prices for an R8 - successful run-out limited edition versions of the original model proved that. In addition, with the Porsche 911 by then a Volkswagen Group product, it was no longer necessary for the R8 to compete with volume versions of that car, so in second generation form, its focus shifted instead to more exotic fare, contenders like McLaren's 540C and the Mercedes-AMG GT - maybe also the Honda NSX. With the R8 though, there was one crucial difference. All these brands, like Porsche and Ferrari, believed that a modern supercar must have a hi-tech turbocharged engine. Audi didn't. We'll understand if you think that doesn't sound very 'Vorsprung durch Technic', though to be fair, the normally aspirated 5.2-litre V10 on offer here has its share of cleverness. Ingolstadt didn't care. They had a 4.0-litre turbo V8 that could easily have been inserted into this car, but they chose not to use it, deciding instead that a proper supercar should sound and feel like one. In that regard, there's no substitute for the kind of high-revving cubic capacity that rivals disregarded in their stampede towards efficiency. As before, it's a formula shared with Lamborghini - and with the R8 LMS GT3 race car that rolled down the same Quattro GmbH production line as this road version. At launch, this 'Type 4S' MK2 model R8 claimed to be the fastest and most powerful Audi ever made and was offered in base 540PS and 'V10 plus' 610PS guises. In 2018, a rear wheel drive version was briefly sold. The car was facelifted in 2019; it's the pre-facelift cars we look at here.

What You Getword count: 591

Visually, the second generation 'Type 4S' R8 remains much like the original, a distinctive cocktail of low-slung curves and delightful design extravagance, though the influential shape of the previous model is here expressed in a tauter, more technically precise way. As before, we're talking Ferrari, but with a German twist. Of course, as ever what really matters is the stuff you can't see. Like its 'Type 42'-series predecessor, this second generation R8 uses lightweight 'ASF' 'Audi Space Frame' construction, shared (as before) with an equivalent model from the Volkswagen Group's Lamborghini brand, in this case the Huracan. With this 'Type 4S' car though, the ASF structure is fashioned not only from aluminium but also from an even more advanced material - carbonfibre reinforced polymer. That not only helped make this MK2 model 32kgs lighter but also contributed to a 40% improvement in torsional rigidity. Getting in is something it's possible to manage in a more graceful manner than is the case with most models of this kind and once inside, you're introduced to what Audi calls a 'luxury-level racing atmosphere' and an interior that remains an object lesson in how to package a two seat sportscar. As before, one of the cockpit's key distinguishing features is what the stylists call the 'monoposto', a stylised large arc that encircles the driver's area of the cockpit, starting in the door and ending at the centre tunnel. But if that's familiar, there's also plenty that'll be different too if you're used to the previous 'Type 42'-series car, the changes beginning with the grippy, flat-bottomed R8 performance steering wheel. Extra round satellite buttons have been added to control engine start-up, exhaust sound and driving dynamics, with an end result that's both pleasing and effective. As for all the infotainment functionality, well, as with Ingolstadt's humbler TT sportscar, that's all been relocated to what we're supposed to call the 'Audi Virtual Cockpit', a 12.3-inch high resolution instrument binnacle display that completely replaces the usual set of conventional dials. As for practicalities, well there's more than you might expect in terms of cabin storage, with a big glovebox compensating to some extent for the tiny door pockets. The cupholders you'd have to do without in this car's Lamborghini cousin are here present and correct in a lidded compartment between the seats. Plus there's a coin slot to the left of the lovely aircraft-style gearstick and storage space ahead of it that includes USB connections, an aux-in point and a 12v socket. And beyond that? Well, were we to be graduating into this car from a 911, we'd miss the little rear seats that Porsche give you there, so useful for chucking a jacket or a designer shopping bag on to. Audi tried to compensate by providing a space behind the seats that it claims is large enough to accommodate a golf bag. Hmm. It'd have to be a fairly small one. You're certainly not going to fit anything of that sort in the boot. Given that huge engine display cabinet out-back, the luggage bay, as in a 911, is in the front. At 112-litres in size, it isn't very big at all, with further precious cubic inches occupied by a bag for the tyre repair kit that Audi provides in lieu of a spare wheel. To be fair, the boot beneath the bonnet of a 911 Turbo is about the same size, but it's also true that a comparable McLaren model gives you about 30% more space, while cars like the Mercedes-AMG GT are vastly more practical. 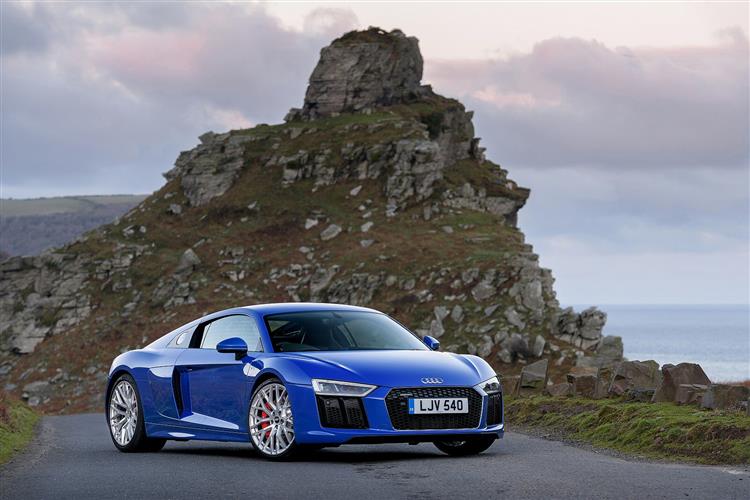