The third generation Audi S8 aimed to bring Brands Hatch to the boardroom, with a potent twin turbo V8 beating beneath the smooth, subtle bodywork. The engine is smaller than that used in the previous generation model but it's also more potent this time round, 520PS enabling sixty two mph to be dispatched in just 4.2s away from rest. Fast enough then, to worry Ferrari folk, yet luxurious enough to rival a Rolls Royce. A very difficult combination to better at the prices being asked.

What's your favorite driving movie of all time? Bullitt, The Italian Job, the Cannonball Run, Vanishing Point? All are legendary but they all also feature cars that, unless stored in a dehumidified garage, would be pretty dog-eared by today's standards. The exception is 1998's 'Ronin'. Get it out on DVD if by chance you haven't seen it. Starring Robert DeNiro, Ronin is a thriller that features some of the best car chases ever filmed. At the beginning of the movie, wheelman-for-hire Larry is asked what kind of motor he needs for a risky job and he replies, "Something very fast. Audi S8, something that can shove a bit." The S8, sporting flagship of Audi's A8 luxury saloon range, has always been able to 'shove a bit'. However, the first generation 335PS V8 version wasn't quite enough for our Larry, so he opted to add a dual-tank nitrous-oxide boosting system to a gorgeous black S8 then used to run down baddies, powerslide about the streets of Paris, and monster around at ridiculous velocities among the back alleys of Nice. Presumably, he'd have been much happier with the second generation version, equipped with a mighty 438PS V10 borrowed from Lamborghini's Gallardo. Or even better, this MK3 model which fronts up with an even more powerful 520PS twin-turbo V8 to properly take on Ferrari folk. Nitrous-oxide? Who needs it? In 2015, Audi also introduced a more powerful S8 plus variant in 2015, with 597PS.

What You Getword count: 617

Weight is the enemy of the luxury high performance saloon. That's one of the main reasons why Audi went to all the trouble of ditching the previous S8 model's Lamborghini-sourced V10 for this MK3 S8 model's lighter and more efficient twin turbo V8. It certainly sits in a lighter, more efficient 'Audi Space Frame' body, made almost entirely of aluminum, with only the B-pillars constructed from ultra high-strength steel. This bodywork itself weighs just 231kgs - about 100kgs less than steel-bodied rivals. Which means that this Audi can carry around the kind of heavy quattro 4WD system its rivals lack, yet still undercut many of them on the scales. And the look? Is it classier than the competition? Many will think so. We can't completely put our finger on what it is but there's something about this car that makes you feel a better, more tasteful and more accomplished person simply by being in its company. There are showier, faster rivals but none has uber-coolness down to such a fine art as this S8. A lot of it's in the detail. Audi S cars have a reputation for styling subtlety and the S8 is no exception. The single frame platinum grey front grille with its chromed eight double bars is a work of art, as are the aluminum-ribbed side air intakes. There's more aluminum-style trim on the door mirror (a classic S-brand touch), plus gorgeous 20-inch alloy wheels, the subtle integrated boot spoiler and the four chromed tail pipes surrounded by a redesigned rear apron. Most won't know what has just blown by and is disappearing into the distance. The interior is similarly restrained but impressive. Everywhere you look, there's a beautiful blend of craftsmanship and technology. As you enter in admiring the illuminated door sill trims, the alcantara headlining and the aluminum-trimmed pedals, the display of the driver information system and a central MMI infotainment monitor that glides out of the dash both greet you with special S8 screens. There's full leather of course and at the front, multi-way power-adjustable comfort sports seats designed exclusively for this model. The three-spoke S quattro steering wheel has colour-contrasting stitching and a set of aluminum-look shift paddles just behind it. Beyond them, you view a set of bespoke instruments, grey dials with white needles, a theme repeated on the classic analogue clock. And special mention must go to the gorgeous aeronautical gear lever than makes you feel like you're bringing a 747 in to land. Brilliant. What about luggage space? Well, power open the electrically operated boot lid and you'll find that it hasn't increased very much over what was offered by the previous generation version, despite the fact that this car is 75mm longer, 55mm wider and 16mm taller than its predecessor. As a result, there's 510-litres on offer - only average for this class of car. Still to be fair, that's more than you get in a rival Porsche Panamera and given that it's easily enough for, say, four golf bags, we think most owners will be quite satisfied. Perhaps, like us, they'll be expecting all that extra size to have benefitted those seated in the rear. If it has, then to be honest, seated back here, you really wouldn't know it, with overall standards of passenger room pretty much as before, even though the cabin is now nearly two metres wide. But then how often do cars of this kind travel with three adults across the back seat? Boadroom buyers rightly place far more importance on the way their carriages can carry four and this one does so with measured elegance, beautiful ambient lighting and hand-sanded and varnished wood panels reminding you how much you've paid. 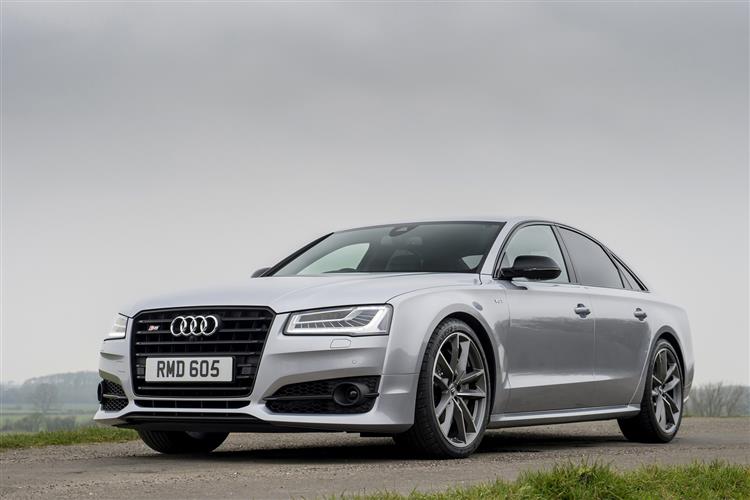