THE PROFESSIONAL CHOICE? (some text hidden)

If your business is looking for a used van and trying to decide between an affordable compact-sized model and a spacious larger one, Fiat's Scudo could prove to be the perfect compromise between the two. It's as spacious as most users will ever need, yet affordable, both to buy and to run. Transit-class buyers need to consider it.

Fiat's LCV sales have been growing steadily over the last decade thanks to a vast investment in new product. The mid-sized second generation Scudo model we're looking at here lies somewhere in the middle of this little lot and claims to offer all the benefits of a very large van with the affordable running costs of quite a small one. This generation model was launched in 2007 as a significantly larger design than the Scudo model it replaced, big enough in fact to compete with a whole new army of larger rivals. Not only the Ford Transit of the time but also tough competitors like Volkswagen's Transporter, Vauxhall's Vivaro, Renault's Trafic and Mercedes' Vito. Taking on this lot wasn't something you'd want to do single-handed, so the Italian brand chose to share this design with both Citroen and Peugeot, whose Dispatch and Expert models are pretty much identical. You get clever design, proven engines and low running costs in a package that certainly works on paper. The second generation Scudo sold until the summer of 2016, when it was replaced by an all-new Talento model.

What You Getword count: 925

Exactly what LCV category this vehicle fits into isn't immediately obvious at first glance. You can see that it's bigger than something like a Citroen Berlingo or Renault Kangoo-sized Fiat Doblo, but you might question whether it has the volume to take on medium range vans of Transit or Vito size. As we'll see, it has. The windscreen is steeply raked creating a wedge-shaped front end with the usual huge Fiat headlamps and the marque's familiar front grille. Moving backwards, thick rubbing strips protect the flanks and the tail lights are mounted high up to help avoid costly parking knocks. As for interior comforts, well the low floor means that the cab's easy to get in and though the handbrake lever's oddly situated between the driver's seat and the door, it doesn't get in the way. The seat itself is positioned to suit those who've to jump in and out of their vehicle all the time, with limited height adjustability and a rake and reach-adjustable steering wheel. An advantage this Scudo offers over Fiat's smaller Doblo is the standard fitment of a properly sized middle third seat. To free up space for this and make it easier for the driver to slide over to the passenger side of the cab, the gearstick has been taken from the floor and mounted on a protruding moulding in the centre of the dash. It still rather gets in the way if you're trying to slide across the cab and limits the middle person's legroom. Still, the third seat is useful to have - and quite adequate for mates on short journeys or kids you might have to drop off on the way to work. If not required, you can place an order for a single passenger seat version. Those who've to spend their working lives in a cab like this will want to see some evidence of care and attention on the part of the designers and sure enough, this Scudo provides it. The usual shallow bin you get in each door has a moulding designed for a soft drinks can or a small bottle of water, plus there are pull-out cupholders at either end of the dashboard. You can even put drinks on the inside of the lockable glovebox lid, though only if there's no one sitting in front of it to have their knees bashed as it opens. Other storage includes a deep, strangely-sized bin on the top of the dash on the passenger side, cubbies in each corner, a shelf beneath the steering column, a tray beneath the passenger seat and a full-width overhead shelf. You'll want some details on loadbay practicality. Looking back, it seems strange to think now that the original first generation Scudo model thought itself big with only 4.0m3 of carriage space to offer, a figure now routinely matched and beaten by many compact little vans. This second generation version is of course, much better provided for, offering from 5.0m3 (if you go for the short wheelbase standard roof version) rising to 6.0m3 if you choose the long wheelbase standard roof model, before culminating at 7.0m3 for those favouring the long wheelbase High Roof version. That latter figure is only 1.0m3 less than Fiat's entry-level Ducato model from the next class up. A lifting tailgate is an option on the Combi versions and standard on the Panorama minibus model, but all vans come with the standard conventional twin side-hinged rear doors that, as usual, open initially to 90-degrees or back to 180-degrees if you unlock the door stays. Heaving weighty cargo aboard is made easier by a low rear loading sill height that's normally 562mm but with optional pneumatic suspension fitted, can be as little as 490mm. It also helps that a rear door aperture of 1273mm in width and 1272mm in height (or 1630mm in High Roof guise) should enable you to get most loads in quite easily. Once you do, there's a useful load length of 2254mm in the short wheelbase model (2584mm in the lwb version) and height that's measured at 1449mm in the standard roof version and 1750mm if you've gone for a High Roof. Whichever Scudo you choose, the load area width is 1600mm, which narrows to 1245mm between the wheelboxes. For those occasions when it's easier to get things in at the side, there's a couple of sliding doors provided with apertures (924mm wide and 1293mm high) big enough to accept a euro pallet. To keep stuff moving from around on the move, eight tie-down points are provided, but if you forget to use them and things slide forward, a pronounced lip at the cab end of the load bed is helpful. It should keep your packages from scraping the half-height protective panels provided on the doors and above the wheelboxes and clanging against the load restraint frame that's fitted to models lacking the optional full width fixed bulkhead that substantially improves cab refinement. And running costs? Well, you can expect to average combined fuel consumption at between 37 and 39mpg, depending on the engine you choose and the type of journeys you're on. To reduce NOx emissions, all the engines on offer are fitted with an Exhaust Gas Recirculation system, one reason why CO2 returns are especially class-competitive, particularly if you go for this Euro5 2.0 Multijet 163bhp model, where they vary between 181 and 185g/km. Service intervals are set at 18,000 miles, insurance groups are 6-8 and there's a 3 year, 120,000 mile warranty, with no mileage limit in the first two years. 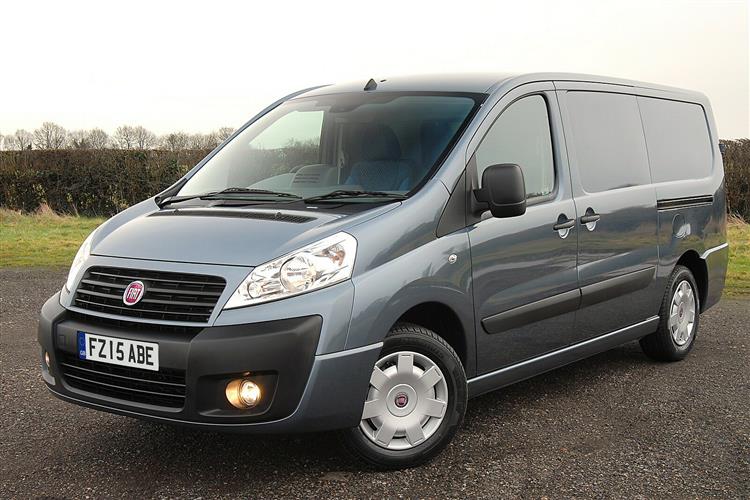