The Audi S3 has long been something more than just another hot hatch. Whether it's the all-wheel drive chassis or the power output that lifts it beyond the GTI brigade, the S3 is a car with vast capability - but one that rarely feels inclined to advertise the fact. In this post-2013 latest guise, you get 300PS and the potential of sub-5 second 0-62mph acceleration rather astonishingly combined with a combined cycle fuel average of over 40mpg. Together with sharp looks, decent practicality and extra hi-tech equipment, all of this might well be enough to create the most complete sports hatch you can buy from the 2013 to 2016 era. Let's check t out as a used buy.

There's something very right about the Audi S3. Always has been, always will be. Let us explain. Once upon a time, a hot hatch didn't have to be a mature, sensible thing. That wasn't the point of buying one. You got a shopping rocket because it was fun - with just enough practicality to enable you to justify the purchase to your other half. With the S3 though, it was different. Here was an aspirational premium GTi with a price tag to match. A hot hatch for people who ordinarily would have grown out of hot hatches We first saw it way back in 1999 at a launch over-shadowed by an Audi TT sportscar that shared the S3's quattro 4WD system and got a slightly pokier version of its 2.0-litre turbocharged unit. That's a basic mechanical configuration the German brand has stuck to ever since - but of course power has spiralled since then. The early 210PS output figure was quickly upgraded to 225PS in the first generation version, then boosted again to 265PS for the MK2 model introduced in 2006. By 2013 though, it was clear that even that kind of power was going to be insufficient for admission into the premier league of hot hatches, the introduction of cars like BMW's M135i and Mercedes' A45 AMG establishing a new 300PS benchmark for the super-shopping rocket segment. It was a sector this MK3 S3 model had to be a part of to justify market positioning as the next stage on from a 230PS Golf GTI. So the 2.0-litre turbo engine was redeveloped from the ground up to make its new numbers and plumbed into the lighter, stiffer MQB platform that had offered so much extra agility and efficiency to more mundane third generation A3 models. The result was the car we're going to look at here as a used buy, which sold from 2013 until a mildly facelifted version with an uprated 310PS engine was introduced in mid-2016.

What You Getword count: 777

A word we keep coming back to when discussing this S3 is 'subtle'. Some might feel this particular post-2013 model is too pared back and that for the kind of money being asked, you should be rewarded with a bit more drama. That's one view. Another might well be that if you've got to the point in life when you can afford to spend a substantial amount on a very fast performance hatch, you might well be done with worrying who notices you and what they think of your purchasing decisions. And it's with this kind of customer in mind that the S3 wears its ornamentation lightly. At the front end, it gets xenon headlamps with LED daytime running lights. Then you've got an S-specific single-frame grille with matt platinum grey inserts and an aluminium-look finish also used across its distinctive horizontal double bars. The bumper gets neat aluminium-look double ribs integrated into the air inlets and there are also pronounced edges that frame air intakes finished with high-gloss black honeycomb inserts. That leaves only the air openings down by the wheels, one of the few bits of extraneous styling on the S3. They don't actually do anything. Moving round to the side, you get the aluminium-look exterior mirrors that characterise all Audi 'S' models, plus a set of sculpted side sills. The car came with 18-inch twin-spoke 'Star' design alloy wheels as standard but original buyers also got three other options, all of the same diameter. Peeking out between the spokes, you'll spy black-painted callipers branded with S3 logos which original buyers could colour red if they preferred. At the back, S3 experts will spot the carefully profiled rear bumper and a platinum grey diffuser bookended by four chromed oval exhaust tailpipes. Aside from that, assuming that the car you're looking at hasn't been specified with one of the exclusive crystal-effect S3 paint finishes (Panther Black and Estoril Blue), the only things that visually differentiate this top variant from any normal S line-trimmed A3 model are a more purposeful roof spoiler and a modest sprinkling of small S-badges. Of course, the more important design elements lie beneath all this tinsel. Like all third generation A3 derivatives, this one rides on the Volkswagen Group's clever MQB chassis. It's a clever piece of kit, composed of a hybrid of steel and aluminium panels, and the part of the car that contributes most to the 60kg weight saving this post-2013 model S3 enjoys over its predecessor. This platform also enabled a 23mm wheelbase increase which in turn, provides for a more spacious cabin you'll probably appreciate most when confined to the rear. Head, leg and - thanks to a 12mm width increase - elbow and shoulder room are all better than was possible before: which you'll doubtless appreciate more frequently if you go for the five-door Sportback bodyshape rather than the three-door version. And out back? Well the boot houses 365-litres of luggage - 15-litres better than the previous model - a figure that rises to 1,100-litres if you fold down the split-folding rear bench. On the Sportback version, the respective figures are 380 and 1,220-litres, while on the saloon, they're 390 and 845-litres. In the Cabriolet version, the figures fall to 320 and 678-litres. Behind the wheel, you can let Audi weave the little spell it likes to lay on you before you've even turned the key of this S3. It's all in the details. Through a lovely, grippy flat-bottomed, chunky S3-embossed leather-trimmed sports steering wheel, you view grey-faced, white-needled instruments which feature a fancy boost pressure indicator on the rev counter which lights up in segments as the turbo pressure increases. There's black headlining with contrast stitching. An aluminium-look pedal set. Deep bucket seats that gently squeeze you into position and feature pull-out cushions. And more S logos on the door sills, the steering wheel and the gearknob to set off the exquisite dashes of chrome and soft-touch tactility. Nobody does this better than Ingolstadt. There's more S3 branding on the splash screen of the MMI infotainment monitor which glides out of the top of the dashboard when you fire up the ignition and still stands as one of the very clearest and most intuitive systems of its kind. Audio, navigational and informational functions are accessed by a simple rotary controller which on optioned-up models will come integrated with a touchpad so that instructions can be traced in by fingertip. Otherwise, feel of this cabin will be familiar fare to anybody who understands Audi design language with its minimalist look, its lack of button cluster and the four characteristic chrome-trimmed circular air vents that punctuate the dash. 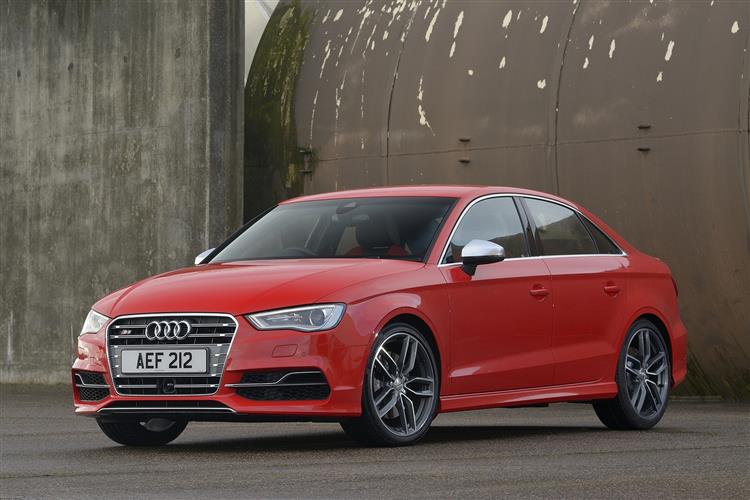