Can a relatively affordable compact convertible be genuinely, heart-stoppingly, aspirationally desirable? Audi thinks so and, in the form of their second generation A3 Cabriolet, brought us an open-topped car that was an enormous improvement on its predecessor. All the Audi attributes you're used to - cool design, fantastic build quality, engine efficiency and strong residual values - were here matched to sleek looks delivering that 'want one' factor. You can't really ask for much more from a compact convertible. Let's check out this one as a used buy in its original 2014 to 2016-era production form.

We've always found it puzzling that car manufacturers frequently pursue an idea obviously flawed from the outset. Perhaps they get a bit mired in the details and lose sight of the bigger picture. Sports cars that don't handle? That worked really well for TVR didn't it? Economy-minded electric cars that cost three times as much as a diesel model? You know who we're talking about. Or how about convertible cars that.. just don't look very elegant? That last trap is one Audi blundered into with its original A3 Cabriolet but one that was firmly rectified by this, its second generation replacement. To be fair, there wasn't much else wrong with that original drop-top A3, a car we first saw in 2007. It was well built, had a range of great engines to choose from and made all sorts of sense on the balance sheet thanks to decent efficiency and strong resale values. The problem lay in its underpinnings, which had to be based on those of the A3 Hatch, hence the short, stubby shape and pram-like look when the roof was down. BMW knew not to do this, basing the Audi's closest rival, their 1 Series Convertible, on a coupe platform for a sleeker, more elegant look. So the Ingolstadt engineers went back to the drawing board, resulting in this second generation version, a car we first saw in the Spring of 2014 and a design clearly based on a very different approach. For a start, this MK2 model was spun off the chassis of the A3 Saloon rather than the hatchback, which meant that it could be both lower and longer than the model it replaced. Perhaps indeed, the car to suit owners of the long lamented A4 Cabriolet unable to stretch to its A5 replacement. And certainly an Audi guaranteed to tempt buyers in search of something just a touch nicer than mainstream family hatch-based compact convertibles can offer. The original version of this MK2 A3 Cabriolet model was produced until 2016, when it was then lightly facelifted and some fresh engine and technology options added. 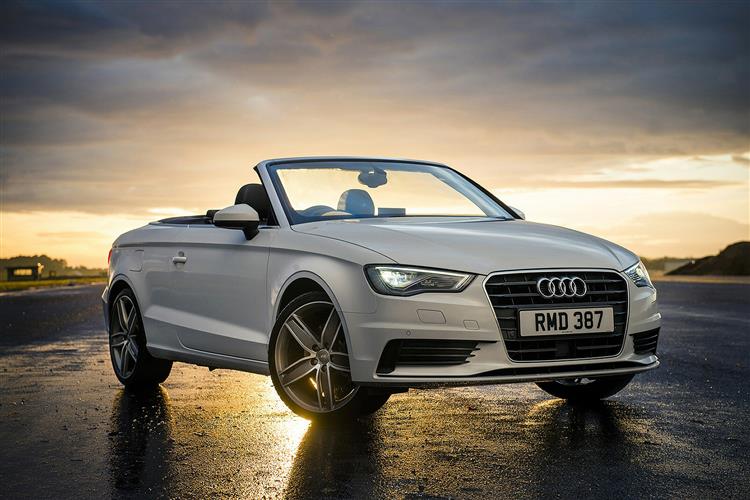