We all like the idea of good things in sensibly sized packages. Perhaps that's why Audi's A3 has been so successful here, a compact car that goes large on quality, refinement and maturity. Especially in third generation guise, where it's lighter, more efficient, more powerful and cleverer than ever before. Which is just as well given that there are Volkswagen Group products using many of the same ingredients and plenty of tempting high profile segment rivals. In other words, this MK3 model will have to work harder than ever to win sales on the used car market. Fortunately for Audi, it seems well up to the task. Let's check out the original version of this car, produced between 2012 and 2015.

The premium compact car. If that concept means anything to you, then it's this model, Audi's A3, that'll probably come to mind. This is the third of three generations in a line that dates all the way back to 1996 and a time when the idea of being able to move a car up-market in class and appeal without increasing its size was new and rather different. Cynics dismissed it as a way of dressing up ordinary family hatches and charging a lot more for them. Customers though, loved the idea and by the time the second generation A3 arrived in 2003, BMW and Mercedes rivals had also arrived to swell the market. Neither of these brands though, could overtake Audi - for reasons partly of their own making. BMW's original 1 Series was hobbled by curious looks and the rear seat packaging restraints of rear wheel drive, while the Mercedes A-Class was less sporty hatch and more tall, tiny MPV. The result was that nearly a quarter of a million MK2 A3s were pounding global roads by the time this third generation model arrived in the Autumn of 2012 - to find a much tougher market awaiting it. By this time, both the 1 Series and the A-Class had developed into cars with more widespread appeal and Lexus, Alfa Romeo and Volvo were all fielding fine premium compact alternatives. Critics too, continued to carp that the increasing excellence of an ordinary Focus or Astra family hatch made cars of this kind unnecessary. Audi's response was very Vorsprung Durch Tecknic, a subtle new suit disguising the revolution beneath the bodywork that was the first outing of the Volkswagen Group's all-new MQB platform. Stiffer and more cost-effective to produce, it promised better ride and handling and freed up funds for the installation of an interior with quality and technology previously unseen at this price point. The result, we were promised, would be the definitive compact premium car, something that was duly delivered when the model hit the showrooms. The three-door hatch version debuted first, followed a few months later by a five-door 'Sportback' hatch version. A Saloon model arrived in 2013, along with an S3 hot hatch version. A pretty Cabriolet model was launched in early 2014 and in 2015, the super hot hatch RS3 variant made its debut. Audi thoroughly revised the entire A3 line-up in the Summer of 2016, smartening up the looks and adding in the clever 'Virtual Cockpit' instrument binnacle as an option.

What You Getword count: 706

For many years, ultra-lightweight construction has been one of the strongest pillars upon which the Audi brand is built. Ingolstadt has, after all, been building cars out of aluminium since 1994. Though this one's mainly made out of steel, in this respect, it's as revolutionary as any model the marque has made, a premium compact hatch that weighs the same as a supermini, 80kgs lighter in third generation form than it was previously. That's equivalent to losing the weight of a fully grown adult, with benefits you can readily imagine in terms of performance and efficiency. So consider that before voicing the first reaction that most have to this third generation A3: which is, quite simply, that it doesn't look much different to what went before. That isn't really true anyway, something you don't properly realise until you park this new model next to its predecessor, an experience that's like looking at a film starlet when she was ten years younger, the newer model simply tauter and prettier. With the three-door version, you get a design that makes particularly effective use of what Audi calls a 'tornado line' to visually press the car down onto the road, this a sharply drawn crease beginning at the headlights and extending in a curve over the wings, doors and side panels to the tail lights. It's there perhaps, to distract your eyes from the fact that this car occupies a roadway footprint that's little different from what went before. Despite this, a wheelbase stretch of 23mm still enables the designers to boast of extra interior space. The five-door Sportback model has a bigger wheelbase still, so that's the variant to choose if you'll regularly be using the back seat. Even in the three-door model, this rear bench can just about seat three adults but, as is inevitably the case with this class of car, two will be much more comfortable. What's certainly not in doubt is that there's a little more room inside than there was before, especially with regard to headroom. Owners used to the previous generation A3 will also find significantly more room in the boot, which in the three-door variant is 15-litres larger at 365-litres, a figure that rises to 380-litres in the Sportback model. You've a more versatile trunk space than before too, thanks to a neat floor that can be re-positioned at different levels, depending on the height of the load you have to carry. There's also a space beneath the cargo area for smaller items and extra functionality promised by useful options like a load area organiser (to separate your eggs from your Iron Bru), a ski hatch and a reversible load mat with a tougher side for boots and muddy dogs. Plus of course, as usual, you can push forward the split-folding rear bench for extra capacity - in the case of the three-door, as much as 1,100-litres. For the larger Sportback, that figure rises to a useful 1,220-litres. What sets this car apart though isn't its practicality. No, it's the feeling you get from sitting behind the wheel. Quite simply, nothing else from this era in the premium compact hatch class can match it, the cabin dominated by an electrically-extending 5.8-inch colour screen centrally positioned on top of the dash. Via this, you can marshal the many functions of a redesigned MMI infotainment system that prevents all but the most vital controls from cluttering up the minimalist dashboard. Just as distinctive are the four air vents, styled to look like miniature jet engines and made up of no fewer than thirty individual parts including bright metal outer rings that are shaped for perfect grip. Otherwise, you've an interior that'll be familiar fare to anybody who speaks fluent Audi design language, everything clear, classy and easily accessible. The instrument panel's styled in a wing-like profile and an electric parking brake switch replaces the traditional - and preferable - handbrake lever so as to free up space for the MMI infotainment system controller by your left hand. Ultimately, what it all adds up to is a cabin that wouldn't be out of place on a car costing twice the price. And how many models of this kind can you say that about? Exactly. 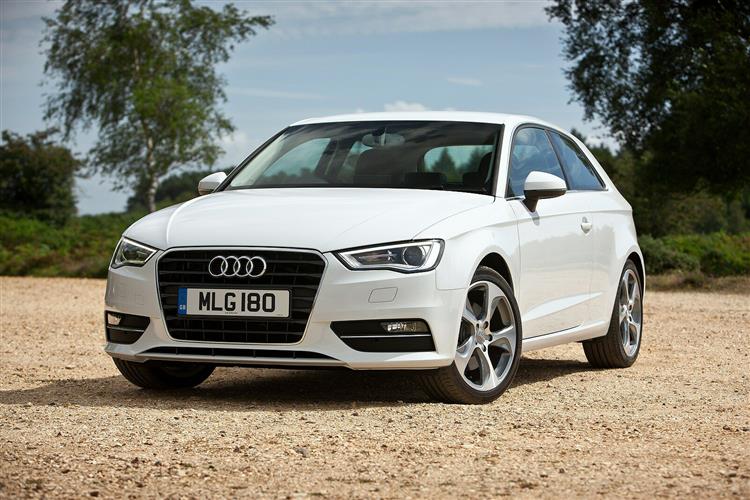