THE ITALIAN OPEN (some text hidden)

Fiat's lovable 500 citycar is even harder to resist in 500 C convertible form. One of the most affordable routes to open-topped motoring is also one of the very best. Let's check it out as a used buy.

New born kittens, baby seals, a panda licking a big lollipop, little kids dressed up as teddy bears with big fluffy ears and bow ties... All the things that make you go aww.. If you like everything with a double-dose of saccharine sweetness, you'll be going all gooey and weak at the knees just from the thought of all that cuteness bundled up together. And when it comes to cars, you'll be just the sort of person that will take next to no time to fall in love with the little convertible we're looking at here, Fiat's 500C. This car is cute made metal. Good things very often come in small packages and there's little doubt that the little 500 has been a 'good thing' for Fiat, rejuvenating the Italian brand from America to Andalucia. So when the Turin maker offered fixed-top buyers the option of this open-roof version in 2009, further success looked certain, even though the cabriolet premium was a hefty one. As it turned out, British buyers didn't mind paying a little extra. Though our land sees less of the sun than almost any other nation in Europe, our love of convertible cars remains undiminished, with demand unmatched across the continent. In any case, this Fiat still offered its customers pretty much the most affordable route to open-topped motoring it was possible to take and in its later guises, fresher air from the exhaust complimented that available from opening the roof, thanks to the adoption of clever Twinair engine technology. The result sounds tempting as a used buy, but will it also appeal to those with tastes beyond the sickly sweet? That's what we're here to find out in this guide to used models sold between 2009 and 2015.

What You Getword count: 767

So. Just how much cute can you cram into one car? For goodness sake, even the Tychy manufacturing plant in Poland where Fiat built this convertible version of its 500 citycar has a cute name. It's tempting to imagine the factory as a Willy Wonka-style operation where the cars float on rivers of golden syrup down assembly lines run by a green-skinned chorus line of oompah-loompahs. A factory of fun where the foreman is a talking spoon and there's a gingerbread man in middle management. All right, so we're getting carried away, but who couldn't love a face like this, faithfully updated from an original 1957 Cinquecento model that was offered as a convertible from very early on - in 1958. We say a 'convertible': in fact, that design wasn't one in the form in the way we recognise today. Rather than the complete top half of the car raising and folding back, it used a kind of giant sunroof in a sardine tin-like arrangement that saw the canvas top concertina-ing backwards and forwards to suit the weather. Half a century on, either in a nod to the original or a bid to save costs, this 500C was developed to use exactly the same kind of idea, open-roofed, yet retaining the same B-pillars, door frames and rear side windows as the standard fixed-top hatch. It's led to some rivals sniffily doubting whether this car is a 'proper convertible' but loyal buyers didn't seem to care, pointing to the ease of use of this arrangement and the way that it was possible to electrically open or close the 6ft fabric roof in up to three positions at speeds of up to 37mph via upper buttons near the rear view mirror. However far you retract it, that roof has a lot of material to fold. Actually we've found this more of a problem in the halfway-back position where the bulging creases create plenty of wind judder that's only partly alleviated by the optional wind deflector that original buyers could purchase to mount behind the front seat headrests. With the top fully back, there's a plump sandwich of fabric but the judders disappear and there's more of a proper cabriolet feeling. Unlike the original Fiat 500's canvas roof, this double-layered fabric top won't leak or flap about. It also features a proper glass rear window and was available in a choice of colours, so original buyers could easily personalise their cars. And unlike most convertibles, it doesn't even impinge on bootspace, the 182-litre capacity being virtually the same as you'd get on the normal 500 hatch. Compare that to the paltry 125-litres you'd get with a pricier drop-top MINI from this era. The bootlid itself does, it's true, have a pretty small opening but at least you can use it when the soft top's fully down, the electrics automatically lifting the retracted hood bundle a few cms upwards when the boot release is activated so you can raise the luggage door properly. Should you need more carriage capacity, the rear seats fold forward to increase the space available to 520-litres, though rather meanly, a split-folding arrangement wasn't fitted as standard to base 'Pop'-trimmed models. Otherwise, the feel is much as it is in any ordinary 500 hatchback, delicious detailing everywhere around the cabin, from the chrome-ringed vents to the circular head restraints. There are a few small issues you'll need to get used to of course: the way the steering wheel is adjustable for height but not for reach - though that's mitigated to some extent by the standard inclusion of a height-adjustable driver's seat. A little more annoying is the way that the circular electronic display in the centre of the speedo becomes illegible with the roof down in bright sunlight. In buying this car, you might be expecting moans from rear seat passengers. This Fiat is, after all, just 3.5m long. Actually, space in the back isn't as much of an issue as you might think. The fabric roof doesn't impinge on rear seat headroom and the designers have made excellent use of the space available to them with clever touches like the neat elbow cut-outs indented into the side panels. It all explains why we've sat in the back of convertibles half as big again that offered less rear passenger space. There's even very reasonable in-cabin stowage, with a usefully deep shelf ahead of the passenger, a small pop-out cubby on the driver's side of the centre console and the usual door bins and cupholders. Even the passenger seat cushion tips forward to reveal an oddments compartment. 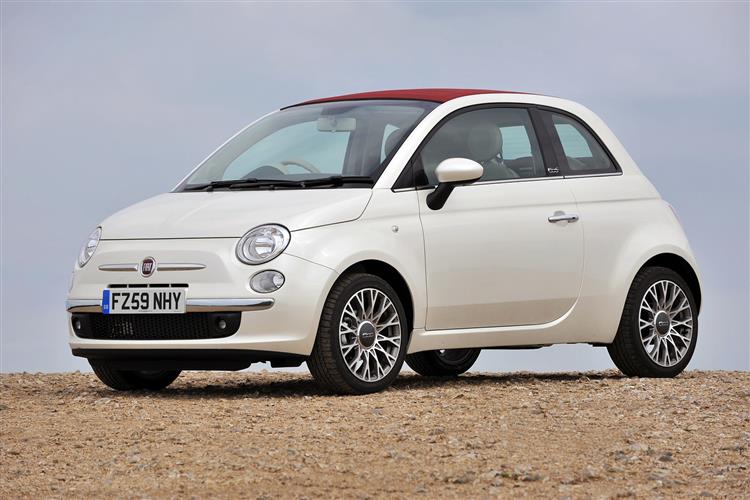